In this week’s viewing: Odd Taxi has a confession, Shadows House has an infodump, and more! 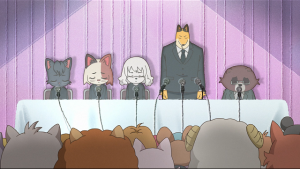 Odd Taxi #11 – In lieu of the usual conversations, we get the confession of the person who lured the missing high school girl away to murder her and dispose of the body. Or the person who planned to, anyway, before someone rudely cut in line and killed her first.

A lot is confirmed or clarified here: the use of masks, the confusion over “Mitsuya”, how Yamamoto wound up renting out Ichimura for scams (but he obviously had some prior association with Yano), and how the real Mitsuya got dumpted in the river. And her actual killer? Well, there’s someone who wouldn’t have raised any suspicion being at the agency office, and who just last week attempted a similar murder: Yamamoto himself. Which just leaves the question of why he’d want to kill a member of his own idol group.

In Gōriki’s investigation, he discovers that Odokawa’s parents died in a murder-suicide that was supposed to have killed Odokawa as well. And where does the mysterious benefactor come into this? Here’s a wild guess: Donraku was a friend of the family somehow, and he reached out to his old classmate Kondō (the tapir guy, Dobu and Yano’s boss) to fund the mysterious foundation. That provides the one-time link to the yakuza which would later be used as the cover story for why Donraku’s daughter vanished. That also could explain why Odokawa is paying the money back; he’s not the kind of guy to accept money from the yakuza.

Which all implies that when Odokawa sat next to Kondō at the sauna one day a few episodes back, it wasn’t just a couple of guys having a random conversation. Kondō recognized the kid he was asked to help out once, and Odokawa knew by then that Kondō was his benefactor! 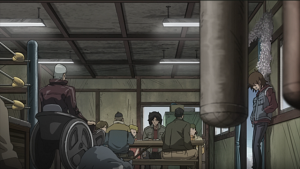 Megalobox 2: Nomad #10 – Joe has nothing wrong with him that stopping boxing wouldn’t address, so as soon as he’s out of the hospital, he holds a big party to reopen Team Nowhere and starts training again. Meanwhile, Mac finally confronts the unpleasant side effects of the BES chip, but also somehow decides he’s still up for a match too.

I feel like when this season is over, I will best be able to describe season 2 of Megalobox as a show about bad life decisions, with occasional boxing thrown in. When Joe has finally repaired his life and regathered all his found family, he asks them if he should take this one last match, and the first vote is “no”, and the rest are “we don’t feel like having our own opinions”, and somehow he hears a ringing endorsement for going ahead. Mac is confronted with the evidence of what BES is turning him into and breaks with his family rather than the sport, and Maya probably should not have sat on the revelation that she was blackmailed for this long. At least we have Sachio taking the information about boxing and brain damage to heart and fully turning toward studying engineering.

Megalobox is starting to rejoin the plot of Ashita no Joe here. The original Joe was suffering from punch-drunk syndrome— what we now call chronic traumatic encephalopathy— by the end of his story, and was hiding that he was blind in one eye. The manga ended on an ambiguous note, with Joe slumped in the . Things don’t look good for our Joe. 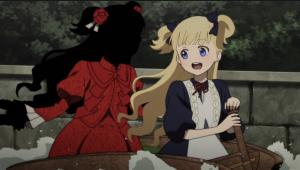 Shadows House #10 – Edward’s plan is working perfectly. The good shadows and dolls will survive the debut, and the ones he disapproves of will be disposed of. Unless there is some factor he has failed to anticipate, like the possibility that Kate and Emilico will crash through the walls of his trap on a surge of water and bravado and previously unrecognized soot-controlling powers.

Much of this episode feels like a reward to the viewer for sitting through the whole debut arc. First, we finally get to see Kate and Emilico being awsome together, and then we finally get a clear explanation of what’s really going on. The part about Shirley’s failure as a shadow also serves as a metafictional explanation: as the character with the least personality, she’s the easiest to kill off.

One gets the impression that Edward has failed slightly by allowing four whole pairs to join adult shadow society. The house probably has fixed capacity, so presumably the rate at which new pairs move to the adult wing needs to be limited. But since they are still moving in occasionally, that implies that something whittles the ranks from time to time. Are there additional ways to fail and be dispersed?

Mars Red #11 – After Maeda turns up to fight Defrott, Glenn switches on yet another piece of his pointlessly complicated trap and leaves them to sort it out while he corrals Nakajima. This they do, with Maeda vanishing again, Aoi seriously injured, and Defrott just waiting to fry, until a chance remark tell Defrott what he needs to do to get the plot moving again.

Defrott had no qualms about turning Misaki or Maeda, but he inexplicably holds off doing the same with Aoi, and then admits when Kurusu turns up that he isn’t really in danger. The whole thing feels a little too set up to force Kurusu and Aoi back together.

We do get one interesting tidbit, though, in that Maeda is actually not the troublemaker in the vampire unit. He’s wandering around entirely on his own. So I guess the vampire stormtrooper who’s having difficulty following orders would be one of the guys we saw very briefly when Maeda visited the shooting range. 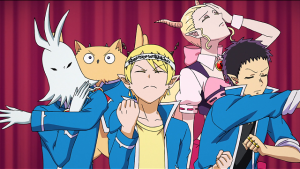 Welcome to Demon School! Iruma-kun season 2 #9 – The previous adventure concluded, Iruma has a whole new raft of problems, starting with the fact that he’s never been to a real school before Bablys, and he doesn’t know how to study. After Asmodeus uncovers the depth of his ignorance through a series of game show parodies, the conclusion is that Iruma needs to focus on his one strong subject, the mythical world of humans.

Somehow this leads to him joining a class where the substitute professor delivers lectures to a literally captive audience. Also Ameri has decided to park the problematic creep who tried to change her personality in Iruma’s club, and what the heck is up with Goemon taking Ameri’s place in the ending credits?

There’s also still the matter of the extra student no one has noticed. But he falls by the wayside for now, I guess, while Iruma grapples with more immediate problems like surviving netherworld history class. Or rather, while it grapples with him.

This week Steve stays put in space and time, reviewing the May/June Magazine of Fantasy & Science Fiction (F&SF). The stories in the issue, however, range all over space and time!