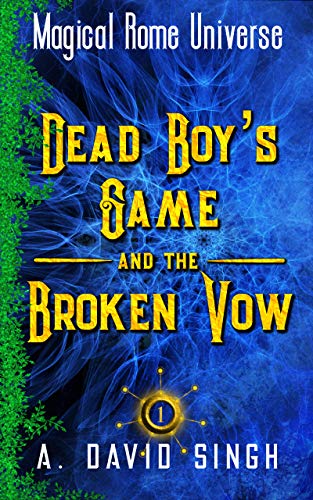 THE DEAD BOY’S GAME AND THE BROKEN VOW  – by A. David Singh

Circa 90 B.C., in Republican Rome, a Druid Magician with the aid of his young slave Aelius performs a dark-arts ritual drawing all the evil from the infant son of a legionary soldier into a dead infant who is later brought back to life. Pleased, the soldier leaves with his newly blessed son. But then, as Aelius cowers in fear in a hiding place, local gangsters called Laytrons who are acting as hired assassins break in to kill the Druid and kidnap the revived scapegoat child. Aelius is left to make his own way in life. His fate, and those of the two children, will become intertwined about 37 years later, along with the fate of Rome itself.

This is not the traditional Rome of that era with a minor alternate history makeover. It is very much an alternate history Rome with a radical revisionist view incorporating magic into the spiritual values of the day. The result, for a Roman history buff like me, is a fascinating read where half the fun is figuring out which aspects are “real” historically speaking, and which details are the author’s imagination run riot. Great fun.

Most people, perhaps familiar with Roman history primarily via Hollywood and BBC TV series, may miss many of the more subtle differences between fact and fancy, and may assume that much of the fiction is genuine history or at least based on history. Doesn’t matter. The two are blended seamlessly together which great adds to the credibility of this fantasy novel.

Still, most people will notice the most obvious deviations from historical fact. For instance, the seven hills of Rome are given fictional names. To name two examples: the Capitoline is called the Lupoline, and the Palatine is referred to as the Romuline. Subtle hints this is indeed a different “reality” being described.

However, readers visualizing themselves standing in the middle of the forum would recognize many familiar buildings true to the age. The Temple of Vesta, Temple of Castor and Pollux, Temple of Saturn, Temple of Concord, the Senate House, the Comitium Rostra speaking platform, and the Basilica Aemilia are all as they should be. Missing, of course, are the imperial era buildings not yet constructed, such as the Temple of Julius Caesar, Arch of Septimius Severus, and Basilica Iulia.

And, as we all know, for this period the Basilica Sempronia, built in 170 B.C., should fill much of the space between the Temple of Saturn and Temple of Castor and Pollux where the Basilica Iulia was later to rise. Except that it doesn’t. Instead there stands the Library of the Senate, a vast building with a marble dome, filled to the brim with thousands of scrolls, a sort of mini-Alexandrian library existing (fictionally) at a time when Rome had no large public libraries.

In the Republican era, If you were a bookworm (scrollworm?) you depended on whatever scrolls you purchased from the bookshops near the Forum or borrowed from the private libraries of the rich and powerful. As the letters of Cicero make clear, borrowing scrolls was a feature of the political patronage system and general socializing of the elite. Even though scrolls were hand-copied by bookshop slaves, the finished product was still too expensive for most people. If you were a poor, starving, poetry lover, listening to free public readings in lecture halls was the best you could do. Which is why the publicly-accessible Library of the Senate in this novel would have brought tears of joy to the non-elite literary crowd of the day had it actually existed. I’ll leave the wonderful description of the building for you to discover. Suffice to say, had I lived in this fictional Rome, this is the place I would have liked to hang out in.

Thing is the library is important to the plot. This is where the Druid’s slave Aelius wound up working for a living as a free man. He must have been keen on getting educated. He has become the Senior Historian of the College of Historians. In fact there never was such a collegium in ancient Rome, but there should have been. It’s a cool idea. It is Aelius who provides a key bit of information to another, more ambitious man, that gets the plot rolling.

Now, what about the characters representing the major political figures most of us are familiar with? Are Gaius Julius Caesar, Mark Antony, and Pompey the Great part of the scene? Yes, but not as great men. They’re just Centurions with a common military experience who happen to be friends. The great military man of the era, the one the Senators are worried might try to make himself dictator, is someone called Gratius Saturninus. Don’t worry. The book isn’t about him.

Instead the book focuses on ambitious but as yet relatively insignificant power-hungry characters like Gaius Julius. He is presumably the alternate history version of Julius Caesar but he is never actually called Caesar. By Roman standards he seems to be a nice chap. Though a stone-cold killer as a soldier, he cares deeply about his young daughter Julia and appears an all-round affable guy. Getting sucked into the Roman patronage system at the lower end makes him grit his teeth though.

Then there’s Calpurnia, daughter of Senator Piso. She’s quite a handful for her old-fashioned father who seeks political gain by marrying her off to some richer, more powerful, and probably older Senator. Typical political patronage shenanigans. A fate that all aristocratic young women of the era are born to and brought up to appreciate. Not Calpurnia. She’s a rebel, and it gets her in to all sorts of trouble, the least of which is her father’s disapproval.

Next there’s Villius Proculus, an eager-beaver apprentice to Senator Spurius Rutilius. Villius is trying to actively promote the good Senator’s career in order to enhance his own, but Rutilius is frustratingly dense when it comes to following advice or exploiting opportunities pointed out to him by Villius. At times Villius is risking his career and future, even his life, to get this “dozing sea cow of a Senator” (to paraphrase Juvenal) to make the right decisions and do the right thing. Not talking morals or ethics, you understand, just prestige-enhancing proposals in the Senate House which increase both Rutilius’ power and the likelihood he’ll reward Villius in the spectacular manner he craves.

Actually, Villius is probably inspired by the standard stock slave character in the Roman comedies of Plautus and Terence. If you’ve seen the movies A Funny Thing happened on the Way to the Forum and Up Pompeii! you’ll know the kind of slave I’m talking about. Always scheming, always taking advantage of their master’s ignorance and gullibility, and just generally inevitability buggering things up considerably. That’s Villius in a nutshell.

The most unusual character is Arborius, a mobile plant creature perhaps inspired by the sort of myths Ovid wrote about in his collection Metamorphoses. The plant was formerly the property of the Magic Druid and is now attached, sometimes literally, to one of the more ambitious characters in the book. Occasionally Arborius functions as a personal oracle. Rather handy, that.

Minor characters abound. Wine-servers. Faithful slaves. Gangsters. And a total nutbar of a Senator named Cato (not the famed “Carthage must be destroyed” Cato but his descendent) who keeps demanding equal rights for women. Just about the most outrageous thing the other Senators have ever heard spoken aloud in the proceedings of the Senate. I mean ancient Rome, during the Republic in particular, was fanatically and insanely patriarchal. But this is an alternate fantasy, after all, so it’s rather fun to see Cato blithely shock the other Senators. Certainly Calpurnia approves. The senators would be even more shocked if they knew what her ultimate ambition is.

One of the characteristics of the Roman political patronage system is that life, for the powers that be, was a continuous unravelling of multiple conspiracies. The lust for power was the name of the game. This is what drove the careers of people like Marius, Sulla, Pompey the Great, Julius Caesar and even Cicero. Suitably disguised as patriotism and love of Rome, but in fact a seething mass of one upmanship, gladhanding and backstabbing (in Caesar’s case literally as it turned out). Friendships, alliances, and even marriages were all temporary matters of convenience. Some Senators employed slaves as secretaries to help keep their lies of the moment uppermost in mind so they didn’t slip up. Wealthy and important people like Cicero’s friend Atticus who stayed out of politics were envied for their peace of mind and relaxed lifestyle, but no true Roman would ever contemplate such an oddball dereliction of duty to oneself. Becoming top dog, by any means fair and foul, was every politician’s ultimate ambition. Sound familiar?

One of the great pleasures of this book is witnessing Roman political shenanigans in action. Among other things you learn that corruption wasn’t just an art form, it was a form of sport practitioners took great pride in, a true measure of practicality and wisdom. In sum, if you were good at profiting unlawfully from your position, you were a good politician. If you were habitually honest … well, you might be publicly lauded, but every genuine politician knew you were an idiot, a fool, and lacked imagination. This is why Roman Republic-era politics is so entertaining. And why this book is so entertaining.

Even better, the climax of the book involves a political action that is at once typical of Late Republican Rome and at the same time utterly unique. It involves both standard techniques and a totally original purpose dependant on the alternate reality presented in this work of fiction.  I’m impressed.

I also enjoyed noting numerous subtle touches that bring this fictional Rome to life. For example, a building important to the plot is a tavern beside the Tiber near the Forum Boarium. Its signage amusingly reads “The Little Tiber, where wine flows faster than water.”

And the alternate reality version of the standard Roman Triumph, rather downsized, is hilarious, yet seems plausible, and significant to the plot , too. Everything in this novel is well integrated and mutually supporting, providing a coherent whole that is both fascinating and entertaining.

And, of course, the contemporary manifestations of the two infants presented at the beginning of the book are revealed in the course of the plot. One expects one to be good and the other evil, but in truth both are complex characters with goodly mixtures of both attributes, albeit involving different percentages.

The book is not quite a stand alone. In a sense, the real contest and conflict has yet to begin. It is the set-up beginning of what could be a series nearly as long-lasting as Rome itself. It has that potential. But it is quite enjoyable in and of itself, I assure you.

I did notice one minor anachronism, the use of something totally unknown to the Romans. But hey, it’s a radical alternate history. Maybe said item is a subtle hint to expect the unexpected in future volumes.

I had a romping good time reading this book. Yes, partly because I’m a Roman history buff. But I think anyone who enjoys fantasy, political intrigue, alternate history, and wry humour will like this book as much as I. That said, I can’t wait to read the next volume whenever it comes out.

The Dead Boy’s Game and the Broken Game is a highly addictive page-turner. Well worth reading. I like it.

The Clubhouse; Fanzine Reviews: “a particularly sarcastic and sardonic curmudgeon”

Blast From the Past: Suncon the 35th Worldcon, Hugo Awards Banquet Audio (Including Notes on Diversity)

Who Killed My Little Pony?

Why I Do What I Do