In this week’s viewing: ODDTAXI adds more threads to its tangled web, Shadows House reveals more of its workings, and more! 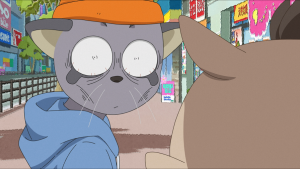 ODDTAXI #4 – With Goriki missing and the yakuza deeply involved in the business of the missing girl, the biggest question on everyone’s minds this week is, of course, what was the deal with that guy with the smartphone that Odokawa almost sideswiped when he took a shortcut through an alley? And the answer is, quite a lot, and with more connections to Odokawa than either of them yet realizes.

The most bizarre one is the ultra-rare eraser which is now in Odokawa’s possession (which will probably enrage Tanaka even more when he finds out). If ditch-11 actually had it, then is that Shirakawa? Or are they one of her underworld associates? Is their criminal income what allows them to buy their way to online status in Zooden? Is that their motivation for turning to crime in the first place?

ODDTAXI is developing a strong theme around the modern internet and what it does to human life and relationships. First the wannabe influencer, then Kakihana lying his way to a date, and now Tanaka and his gambling problem. Tanaka knows he has a problem, and he even works in the industry that enables it, but he can’t stop himself from reaching for that next dopamine hit.

What finally gives him the rush comes from, as he freely admits, having his perceptions distorted so far that he starts seeing the world as a game and a hidden gun as an ultra-rare drop that he needs to get some use out of. I don’t think he’s likely to be much of a threat to Odokawa, who can probably talk him down. But with powerful forces keeping a close eye on Odokawa, there are good odds that someone else is going to notice Tanaka waving a gun around before he even gets the chance to commit murder. Perhaps even the person who buried that gun in the first place. 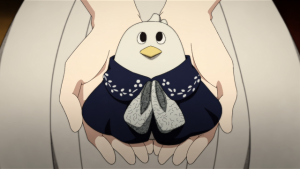 Shadows House #3 – Emilico’s first “school day” involves a tour of the house, a sudden emergency, a very important lesson about not neglecting safety gear, and a near-death. Also a bath.

I gotta hand it to Shadows House, there are few shows which could so casually throw in a supernatural monster that infinitely divides and zombifies the unwary, and be like “nbd, everyone’s fine,” and move on to mundane matters. Like the oncoming debut, for instance, which drives Emilico and Kate to collaborate in the face of hints that it may be an existential threat for both of them.

Emilico figures out the soot emitted by the shadows can be controlled by them. She suspects that the soot monster, then, was created by someone rather than just happening. There are also implications for the shadows themselves. Were they, in turn, created by someone? Can they still be controlled by that someone if they step out of line? And for the dolls: Since ingested soot can control them, was that part of the drink we saw them taking at the very start?

Mars Red #4 – A body has been found in the red-light district, because if you want more movement in your crime show, you can’t go wrong throwing in a dead prostitute or two. Zero finds itself in the middle of a small undead apocalypse, while Aoi unwittingly uncovers more of the Ascra operation.

There are now two ways that Zero can find its way to Aoi and the real plot. One is DeFrott, who is unhappy about the British violating their agreement with him. They were supposed to leave Tokyo alone, but they aren’t, and DeFrott knows something of Maeda and what he’s up to, and might decide to put a clue in his path pointing him in the right direction.

The other is that someone in the military bureaucracy may put the pieces together. Even if Aoi’s articles aren’t being published, the military censors are reading them and grasping at least some of the implications. If any of them are friendly to Maeda, or if Nakajima hears about the articles, then he may hear about the “perfume” that way.

All of this is academic if Maeda collapses from a heart attack from overwork, as it’s implied he’s about to at the end of the episode. The unit may be faced with a choice about whether to try to make him a vampire. Actually, that should be a fairly easy choice if the other option is he dies for sure.

In the meantime, it’s Suwa’s turn for some character development. 300 years old puts his birth shortly after Japan was unified under the Tokugawa shoguns. He’s seen roughly 250 years of feudal stasis as they tried to keep the rest of the world out, followed by 50-odd years of breakneck development as Japan has tried to catch up. If he thinks things are unnecessarily developed now, in less than 40 years the bullet trains are going into service. 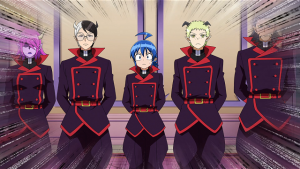 Welcome to Demon School! Iruma-kun season 2 #2 – Iruma’s brief stint as a backup idol singer continues to haunt him, but bigger things are afoot. His club no longer meets school requirements, so he is separated from his friends, moved to the harsh routine of the Student Council, and worst of all, he has to make it through Demon Lent.

In some ways, Iruma is returning to the life he led before he was adopted by Sullivan, when his parents made him take crappy jobs and hardly fed him enough. But he has a support system this time, and he does get to go to school, and Ameri does seem to have a genuine respect for his worth as a sentient being, unlike his parents.

Still, all this is likely to become irrelevant now that Ameri has been doused with some kind of magic personality-changing spray. What happens to the student council when their stern taskmaster is no longer so stern? 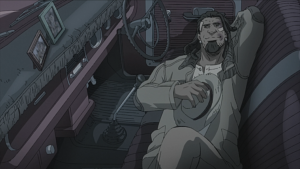 Megalobox 2: Nomad #4 – Chief does not die in the fire; instead he makes it out with his treasures, goes to the big fight, takes all the underhanded ploys that Hikawa’s champion can dish out, inspires Mio to come back and mend his ways, and generally saves the day. Then he goes and dies, leaving Joe with a big promise to live up to.

This got so, so close to avoiding the “minority person who dispenses wisdom and then dies to motivate the hero more” trope. It’s not even necessary here. You can totally believe that Joe’s going to follow through on his promise no matter what. The extra push isn’t needed.

On a similar note, Mio’s story is tied off far too neatly. It didn’t earn that sudden complete change of heart. But it was nice to have that last moment to reveal that not all of his Japanese faux-buddies are total jerks.

Joe is not exactly going home in the sense Chief would think. For those who haven’t seen season 1, Joe isn’t even his original name. He’s a stateless person, born in Japan but not a citizen, who originally fought as “Junk Dog” and got the name “Joe” along with forged citizenship papers. It’s not clear if he was born in the area where most of season 1 takes place. But he does have one strong tie there, Sachio, the kid who helped inspire him to make it to the Megalobox tournament.

Do you enjoy reading science fiction romance? If so, Veronica Scott has some recent releases for you.

In this week’s viewing: While your correspondent is travelling, a special look at show every anime fan should watch.