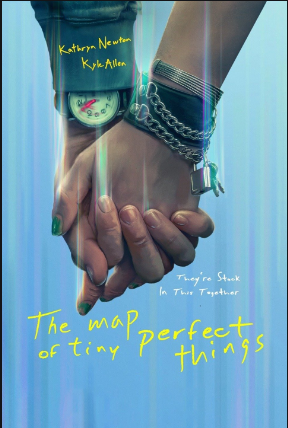 I love the “day repeating itself” trope and so was eager to watch the movie “Map of Tiny Perfect Things”, released in February on Amazon Prime Video. My favorite in the genre is the classic “Groundhog Day” with Bill Murray although Tom Cruise’s “Edge of Tomorrow” is a close second for me. I think “Map” is a worthy entrant into the field.

One of the most fascinating things to me about movies in this genre is asking myself what I’d do differently, if I found myself in the situation. The possibilities are endless, as long as you can stay within the twenty four hours of your allotted, repeating day.

Kyle Allen as Mark, the older teenager reliving the day endlessly in this movie, did an excellent job of portraying the process of enduring this strange situation and always – always – knowing what’s going to happen next, whether it’s his bratty younger sister calling him a loser at breakfast or a cute girl falling into a swimming pool. Unlike many such movies, we join him as he’s been doing this a long time and I was a bit puzzled as to why he’d bother going through the same motions every day until he obviously has them well-polished and timed.  As the movie goes on, we learn he has changed up a few things, among them trying some alternative solutions to getting close to the girl he has his eye on. He’s weighed down by the knowledge that no matter what he does or achieves, it’s all wiped away at midnight with a rumble of thunder.

Jermaine Harris was wonderful as Henry the stalwart friend, unaware of the time anomaly, sitting on his couch day after day, watching his avatar getting clobbered in glorious technicolor on the game screen, as he indulges Mark in what he obviously thinks are mere philosophical discussions about what if time was messed up. I enjoyed his scenes and he did come up with some good insights and suggestions despite being trapped in his own loop and not knowing it. (Dude, you need new weapons!)

So we follow Mark on his endless rounds of the town, the school and the local pool, repeating his humdrum life events…until suddenly a girl we’ve never seen walks past, interrupts one of the established action scenes and blithely strolls away. She’s as aware of the time anomaly as he is! Kathryn Newton as Margaret was an incredibly strong character. Smart, with goals (to be a NASA Mission Specialist), and not all that interested in Mark actually. He of course is much smitten with her, not only because she can remember the day as well as he can, being also a free agent within the day, but also because she forces him to start asking himself more questions about the situation. Margaret is really the catalyst for him to grow.

Maybe he doesn’t have to be so passive and just accept that the toast will pop up on cue, or his sister will call him loser or any of the other countless routines he’s been maintaining.

The sequence of events where he and Margaret develop the actual map of the title and find all the tiny perfect things in their town was enchanting and fun. I loved the concept and the way they identified what qualified to be counted as ‘perfect’. Kind of makes a person start thinking what would fit in the category in their own life and keep an eye out for a few to happen.

But Margaret has secrets, which always seem to pull her back when she comes too close to romance with Mark. And most days she abruptly leaves him at the same time late in the afternoon and refuses to explain what’s going on.

There was one weird thing about the movie’s structure. About 2/3 of the way through, we arbitrarily switch points of view (POV) to focus on Margaret. Mark, whose life and worries have dominated the story up ‘til now becomes secondary and we realize he’s not the main character after all. Margaret is. This is truly all about her. I don’t know if Lev Grossman (The Magicians), who wrote the screenplay based on his own short story, thought it was a cute reveal but it was jarring to me. Like watching a different movie almost. As if you wandered out to get popcorn in the middle of one movie and walked back into the wrong theater. As an author myself, I probably wouldn’t have wanted to take the audience out of the flow of the story and make them ask what the heck was going on but ok.  Author choices. There’s a good interview with Mr. Grossman on SyFy Wire where he doesn’t discuss this point exactly (although he does share what scene he got to act in) but I got the impression he loves time loop stories but wanted to turn them a bit inside out. So perhaps this twist was his motivation to do something unusual with the POV.

Why not put more of the focus on Margaret earlier though? But to move along with this review…

Margaret goes through enough of the same day activities we’ve seen before to reassure us we are still in the right theater and then she goes off the timetable we’ve all become familiar with, to do new things. Since I loved the character and the actress, I was okay with whatever she wanted to do.

Some time loop stories have elaborate explanations for why the events happen and some give you no explanation at all. This was somewhere in the middle of the spectrum and I was fine with the eventual reveal, explanation and solution.

I don’t do spoilers but I will tell you I was quite happy with the ending, the romance was very sweet (literally – one pretty chaste kiss), with the required Happy Ever After ending for a scifi romance and I give this movie an A. I was also motivated to go buy the novella that the movie was based on and can’t wait to read it.

(Henry needs his own sequel now though…)

The description in this tale is lush and vivid, conjuring up details of a spiritual reality quite different from Western tradition.

No. 13 – The Number Thirteen, Black Magic, Mysticism, Swordplay and Sorcery