Theia is still with us

A team of scientists from Arizona State University has proposed that the large concentrations of material in Earth’s mantle, (called the large low-shear velocity provinces, LLSVPs), may be leftover pieces of Theia – a protoplanet theorized to have struck Earth – resulting in the formation of the Moon.

Many scientists now believe that the Moon was created when another planet – called Theia – collided with a very early Earth. Those pieces of Earth, Theia and/or both that were flung into space during the collision, eventually coalesced into the Moon.

While we’ve known about that for some time, further theories regarding what happened to the rest of that protoplanet are still the subject of much conjecture. In this new effort, the team in Arizona suggests that much of Theia’s mass wound up in Earth’s mantle, forming what are now called the large low-shear-velocity provinces, LLSVPs—one beneath parts of the African continent. and one beneath the Pacific Ocean. 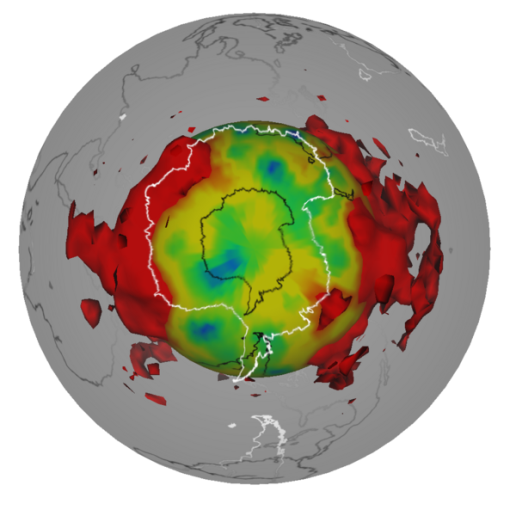 Scientists have been studying LLSVPs for many years, as their existence was confirmed after monitoring seismic readings around the globe and comparing the data. When seismic waves run into the LLSVPs, they slow down, suggesting the material they are made of is denser than the rest of the mantle. The LLSVPs are very large and rest on the rim of the outer core. The team at ASU conjectured that if Theia’s mantle was denser than Earth’s, then any of it that made its way to the mantle would eventually work its way toward the inner core.

To test their ideas, the team at ASU built a model depicting Earth as it was approximately 4.5 billion years ago and then showed what could have happened if there was a collision with a planet the size of Mars, or even larger.
Note: The model assumed that the mantle of Theia was rich in iron, making it extremely dense. In their model, Theia was mostly destroyed, with pieces being flung into space to eventually form the Moon, and much of the rest of its mantle breaking into fragments, which made it all the way into Earth’s mantle. Over billions of years, the fragments merged, forming the LLSVPs.

While these latest researchers admit that the idea of Theian fragments making up the LLSVPs have been expressed before, their work is the most comprehensive to date, and better helps us understand the evolution of our own planet.

As long as hydra stay near microscopic, it’s all good.

You could be among the first to witness a NEW meteor shower.

A Million Reasons Why CyberStorm Is Still Relevant