In this week’s viewing: Re:ZERO definitively sets things on a new course, Wonder Egg Priority is all about changes ahead, and more! 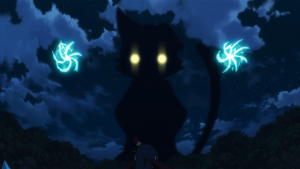 Re:ZERO -Starting Life in Another World- #48 – All the battles come to a head now— Subaru and the band of allies he has scraped together versus Elsa and her minions, Ram and Puck versus Roswaal and the power that controls him, and Emilia versus the most terrifying possibilities of the future that Echidna can throw at her. And all three end in the kind of epic smackdown that has been earned by all the suffering that has happened since this story arc began.

What a satisfying episode. Sure, some of it sounds very silly if described out loud, like “and then the beast guy rips the giant magic hippopotamus’s head off by spinning it around and around, and then he muscles up and smashes the vampire to a pulp with its body”, but that was a completely epic and long-deserved smash and Re:ZERO has nothing to be embarassed about.

Let’s count the casualties: Elsa and the hippo are probably both down for the count. Maylie has survived, though, and will no doubt be attempting to get revenge later. Roswaal is still up, but both his home and the purpose that has fueled him for centuries have gone up in flames. The barrier that traps beastfolk in the Sanctuary is finally gone, but alongside its deactivation, Emilia makes the worrying discovery that Echidna’s mausoleum does not contain Echidna, but someone who just resembles her. If Echidna has been lying about being dead— or if she’s found a way to return from the grave— then Subaru now has an even more powerful foe than Roswaal to worry about. 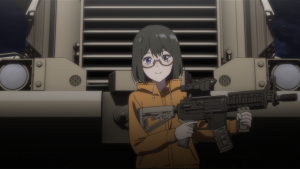 Otherside Picnic #11 – Regretting leaving the Marines behind on the Otherside, Sorawo has a plan to find the way back to them. Just recreate the actions that brought her and Toriko to Station February, minus the part about getting seriously drunk, follow their map, and then try to use their powers to guide the soldiers home. Considering how badly plans tend to go wrong when they come into contact with the Otherside, this one does fairly well.

Then again, the drunkenness might turn out to be helpful, given the speculation in this episode that altered states of mind can make it easier to affect Otherside residents. Slightly fewer sanity points could have helped out the Marines, for instance, trying to shoot down Cernunos’s army of twig people when Sorawo couldn’t keep her gaze on them.

With some quiet time before the march home, Toriko gets a chance to fill viewers in on her backstory. She comes by her military knowledge from her mother being a Canadian soldier; given that she has a proper Japanese last name, the implication is that her father is Japanese (or Japanese-Canadian) and she learned the language from him. And as Toriko tends to pepper her speech with English, this would make her mother a non-Francophone Canadian, a real oddity in anime.

The Marines can’t quite remember where exactly their entry point was, but a mysterious box surrounded by spiritual caution tape might as well have a giant sign on it reading EXIT HERE. Also the fact that it has a monster lurking nearby suggests that this is a path where monster prey likes to travel. Now they just have to take down another urban legend to get everyone back to Okinawa. 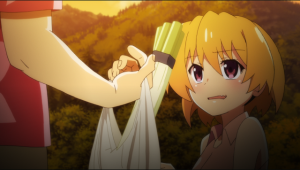 Higurashi: When They Cry – GOU #23 – Hōjō Teppei has been having peculiar dreams lately, where his past mistakes come back to kill him, so he thinks a change of scenery to Hinamizawa might do the trick. Maybe even trying to make up with his niece, who he previously participated in terrorizing so much that his nephew eventually killed his wife. That couldn’t go wrong, could it?

As Higurashi slowly sidles up to the topic of whether the abuse was really happning again or not, it fills in a few details to put past loops in context. Satoko’s incredible winning streak at the boardgame party is now understandable. Teppei having a prescription is explained as being for the dreams he has of past loops (and this is around the same time that Keiichi remembered attacking Teppei in a past loop as a dream). And regardless of what happens next or all the time she’s now spent chasing Rika, Satoko is still seriously traumatized by the abuse she experienced living with Teppei and his wife.

What has to be explained next is why Teppei is absent from subsequent loops. Does this time going badly get added to Teppei’s dreams and warn him away from taking this path, or does Satoko find some more permanent way to remove him? We’ve already seen that there’s a way to kill a looper— could that sword also banish a non-looper? 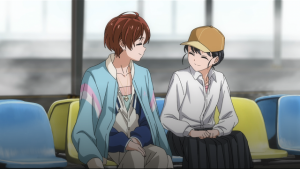 Wonder Egg Priority #11 – Momoe is crushed one moment by a failed date with yet another gender misunderstanding, then uplifted the next by helping another suicide victim and discovering that there actually is an end to the fighting. And then she discovers the absolute horror that happens afterward.

I’ve suspected for a while that Momoe might be revealed to be a trans girl, and her final mission being to aid a trans boy seemed to be leading up to that, but no, that part is left ambiguous. If she is trans, she at least has a supportive parent; her mother using the -chan honorific says that she accepts Momoe as female. (And, by the way, yet another apparent single mother.)

Transformation is the great big theme of this one. There’s the creature with the butterfly head, taking away Momoe’s familiar now that she no longer needs it; her friend changing from a statue to a vanished spirit; Mr. Sawaki’s painting, showing the changes ahead for Ai. Little things too, like Neiru trying out a new hairstyle, or Ai dressing like her mother to visit the art show. The change that they are all passing through, in one way or another, is the transition from childhood to adulthood.

Still, what’s the business of needing warriors of love to defeat death? The Accas seem to need the girls for something else even after they are ready to let go of their attachments to the dead. They seem to realize that they’ve screwed up in Momoe’s case. What happens when she tells her friends about what happened? Do they all go on strike?

This week it’s Attack on Titan which is missing in action. No production delays this time, just an inconveniently timed earthquake whose news coverage interrupted the episode as it aired in Japan. International streaming services aren’t allowed to post it until the whole thing has aired on domestic TV, but don’t worry, a re-air time has been worked out, and we’ll get it and the next episode next week.

Life seems to be breaking out all over…maybe

When I First Got Into Fandom

Playing the Short Game: How to Sell Your Short Fiction (Part 9 in series)