In this week’s viewing: Higurashi turns the screws further, Attack on Titan has a jailbreak, and more! 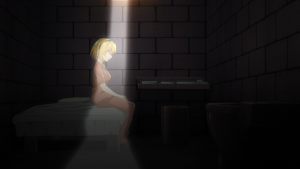 Higurashi: When They Cry – GOU #20 – Things go from bad to worse for Satoko as an attempt to revive Rika’s old fighting spirit leads St. Lucia’s to reveal itself as a literal prison. Even a day off campus for a Hinamizawa school reunion which does let her relive the good old times is tinged with sadness as she sees her old homes falling into ruin. So naturally it’s when she’s at her lowest ebb that a supernatural force approaches her, ready to bargain.

Satoko’s problem looks more and more like it isn’t just being out of place. Nor is it that Rika has lived one hundred subjective years and she hasn’t. Satoko isn’t ready to grow up at all. Even if she can break Rika’s spirit and keep her in Hinamizawa, time will march onward, they will move on to high school, and the village will decline. So although she’s thinking of undoing her choice to try to get into St. Lucia’s right now, what she really wants is what we’ve already seen so far in this series: her and Rika trapped together in primary school forever.

Both the original story and this one are tapping into the big issues of rural Japan in the events that shape Hinamizawa. In the 1980s, Japan had already overbuilt its infrastructure but was still building more, to keep the economy and the wheels of political patronage spinning (and, continuing into the 1990s, trying to restart the economy and bring the good times back). Now the issue on everyone’s minds is the depopulation of the countryside. Between the declining population and the allure of the big cities, villages all up and down Japan are shrinking, closing their schools, becoming nothing more than retirement communities. Like Satoko, many people are looking for a way to turn back the clock. 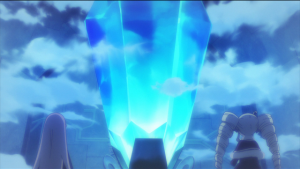 Re:ZERO -Starting Life in Another World- #45 – With Emilia’s memories sorted out, one last flashback is necessary to explain how the Sanctuary was originally created, what Ryuzu Meyer is doing in that crystal, and what Roswaal has to do with all of this. And then it is time for Subaru to confront Roswaal with the full knowledge of what is going and and what he’s going to do about it.

On the one hand, we have Re:ZERO staying true to its light-novel roots this week, as every thing that happens involves way, way, way, way too much talking, plus it opens with possibly the most unappetizing kiss ever animated. On the other hand, a small part of the talking is Subaru laying out why he’s the hero and proving that he’s become a worthy boyfriend for Emilia. One of the greatest moments in this show was halfway through the first season, when Emilia explained to Subaru that it was nice that he liked her, but it didn’t obligate her to become his girlfriend. Subaru explaining that he wants to allow Emilia to be strong is another of those moments.

Also good this week: hey, we saw an ending credits sequence this week! And right after last week’s episode had a full, proper opening at long last! Dare we hope that by the end of the season, it might be possible to fit both into one episode? 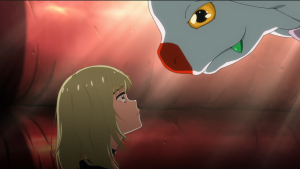 Wonder Egg Priority #7 – It’s Rika’s birthday, and she has a lot of feelings about her parents and trouble expressing them. She grumbles, then she claims she’s okay, opens up to Ai but then goes home to cut herself, almost gives in to despair but is saved by the love of an adorable giant fighting turtle and the support of her friends.

Like Ai, Rika doesn’t seem to have had a lot of strong bonds in her life. Ai at least had Koito and has a decent mother; Rika had Chiemi and maybe that’s it. Rika’s desperation to meet her dad seems like an attempt to reach out for all the support she can get. But now she finds herself in the position of a parent of sorts to Mannen.

It’s been odd that a tool of self-harm has been Rika’s weapon against monsters, but she explains it this week: it’s her coping strategy. She sees it as a way of keeping herself from doing something worse.

As for all the questions about Ai’s behavior last week, exactly none of them are answered. She just says she realized somehow that being a shut-in wasn’t helping, and she has friends now, and being back at school is completely undramatic. Sure, okay, but still, what the heck is going on with Mr. Sawaki?? 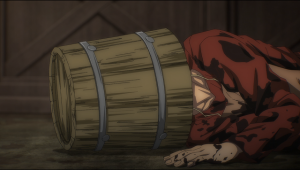 Attack on Titan #70 – Eren is still imprisoned, but there are people willing to defy the system and speak up for his release, no matter what it costs them. Gabi and Falco have broken out, and when they have a chance to meet Paradisians in a peaceful setting, Gabi slowly starts to accept that maybe they aren’t all deserving of damnation. Horses still hate her, though.

The big theme of this episode is that, despite everything, there are a few people who want to try to do the right thing just because it is the right thing. Kaya knows that her new friends are from Marley and still helps them; many of Eren’s old comrades will stand up for him because they recall everything he’s done as a member of the Survey Corps (and he was unjustly imprisoned once before).

But that also spotlights the ideals that many longtime characters have abandoned. Louise wants to be a hero like Mikasa, but Mikasa isn’t feeling very heroic these days. Once upon a time, her strongest loyalty was to Eren, but seeing what he’s become, she’s turned away from him. Hange once thought freedom of information was a great idea, but now they’re keeping horrifying secrets from their old allies. And many of the Corps members who have chosen to work with Zeke once just wanted to free themselves from the danger posed by Titans, but now they’re all for using the Titans to build a new empire. 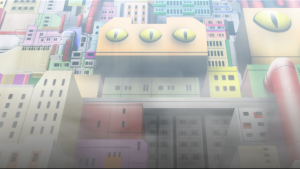 Otherside Picnic #8 – Trouble is coming at Sorawo from all sides now. Somehow word has gotten out that she is a person who knows things about the supernatural, leading to a freshman appealing to her for help with a crazy story about ninja cats. Somehow she realizes at an awkward moment that she doesn’t think “friend” is quite the right word for Toriko. And she and Toriko have made yet another questionable decision while drunk.

After everything Sorawo and Toriko have been through, a certain amount of paranoia is understandable. Otherside Picnic has great fun with that this week, as they keep expecting for new cosmic horrors to reveal themselves but learn that sometimes an unexpected deliveryman is just an unexpected deliveryman, and sometimes when someone says they’re being attacked by ninja cats, they really mean actual cats who are actual ninjas. In fact much of this episode is just the extended remix version of the Just a Cat trope.

This show clearly is working with limited animation resources, with the sound work picking up the slack to really bring the creepy atmosphere. But I will say it clearly threw everything it had into the visuals of the fight scene this week, and got an excellent return on its investment.

Continuing his series on the first year of Amazing Stories, Steve sees what “scientifiction” was trying to become: US!

In this week’s viewing: Celestial Method builds friendships through astronomy, Gugure! Kokkuri-san performs an extended riff on a classic, and more!

Digging in to Writing