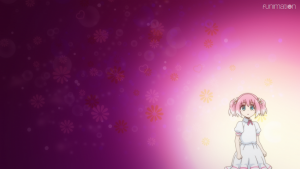 Talentless Nana finale – Suddenly Michiru is an amateur detective and levelling up her power. Suddenly Nana is forced to accept that she has, improbably made a friend, and that she might be on the wrong side. And then, just as suddenly, well, we all know that nice people can’t last very long in this sort of story…

So, no surprise that the price of Michiru saving a life is the loss of her own. On the other hand, it’s a big revelation that she’s able to point out a missed clue about what really happened to Nana’s parents. And that’s all it takes to start Nana’s conditioning crumbling. Soon she’ll work out that she was lied to in order to turn her into a weapon.

Clearly this is not the end of the story, but this season manages to find a resting point with Michiru’s departure and Nana’s reevaluation of her past. Having started off by throwing the traditional superhero school story off a cliff, Talentless Nana now turns around again and questions the premise it’s been working with since episode 2. For its fresh ideas about the whole superhero genre, this is one of the best shows to have finished this year. 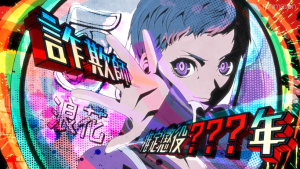 Akudama Drive finale – The remaining Akudama turn out not to have made a brilliant escape just before the Shinkansen was blown up last time, but they do survive, and now the Swindler and the Courier must live up to their names more than ever before to finish their mission, no matter how much is destroyed along the way.

Points for completely committing there, with absolutely none of the original criminal gang surviving to the end. But every one of of the good guys went out doing what they were best at. The Swindler pulled her biggest scam yet, the Courier made the impossible delivery, the Brawler had a great fight, the Hacker was fighting in his favorite way (though I still believe he’s backed up somewhere), and the Hoodlum, the small-time criminal, got to wind up with a small but significant action.

At the end, Akudama Drive stays true to the ways of Hollywood action movies, with everything reduced to smoldering rubble but the cute kids unharmed. The last flourish, though, the cherry blossom petals as the Brother and Sister cross to Shikoku, is a distinctly Japanese one, signifying the spring and renewal. 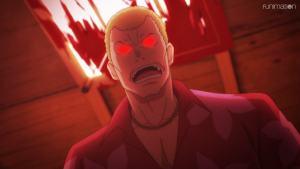 Higurashi: When They Cry – GOU #13 – Keiichi has now riled everyone up so far that the movement to rescue Satoko has reached the stage of being declared full-on civil unrest. Keiichi has also impressed Oryō so much that favors are being called in from Sonozakis in politics and law. Finally the bureacracy crumbles and Satoko is freed. And then somehow Keiichi is in the hospital hearing that almost everyone’s dead again.

Didn’t we establish in the last arc that skipping the ritual dance is definitely a bad thing? Rika must be seriously frustrated with Keiichi by now, to have gotten to this point and have him wander off again. At least now we have a suspect for Satoko’s killing in the first and second arcs.

But, Ōishi? Seriously? The heck? Sure, he was saying he was only letting the protesters win for now, but he seemed more like the sort to have some kind of clever procedural maneuver up his sleeve, or help from the powers that be at a higher level than the city. Definitely not “haha, let them win for now, because I’m planning to gun them all down later.”

It feels like there is much, much more to reveal about Hinamizawa, which is just as well because we’re supposed to get three more months of this. After the January premieres, we’ll pick this one back up for sure. 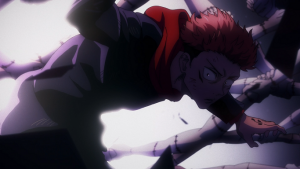 Jujutsu Kaisen #13 – Mahito goes all out to defeat Yūji and Nanami, dragging Nanami into his own pocket dimension to finish him off. But Nanami reckons without two things: Yūji has all the persistence of a typical shōnen hero, and Ryōmen Sukuna is not a touchy-feely sort of guy.

So, to sum up Domain Expansion: A sorcerer creates a zone of altered reality where they can get automatic crits on everyone inside. They can’t choose to not attack, and they don’t bother keeping people out, because what idiot would run into the danger? A overpowered bonehead like Yūji, that’s who. Again, typical shōnen hero.

Jujutsu Kaisen as a whole is turning out to be a typical shōnen story (including the school competition arc coming up next), but still one with solid writing and top-notch directing. We’ll come back to this one in January too. 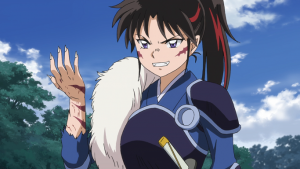 Yashahime: Princess Half-Demon #13 – A monster with a taste for monks is said to be roaming the countryside, so the demon hunters scatter to protect whichever monks they can. When it comes for the one Tōwa and Setsuna are guarding, Setsuna has to pull out a new power which requires a spiritual binding to be released. Good thing there’s a monk handy to remove and then reapply it!

Setsuna’s demonic poison is inherited from her father Sesshōmaru, and she suggests that Tōwa might have inherited some other ability. There are plenty for the writers to choose from, so who knows what that might turn out to be.

This is where I should say we’ll be looking at this again January, but really, with so many good shows continuing and returning, and so much new stuff to choose from, Yashahime doesn’t stand a chance of measuring up. It’s been interesting to see what new writers could do with a wildly popular franchise, but it’s just not strong enough to stand on its own. We’ll leave it here.