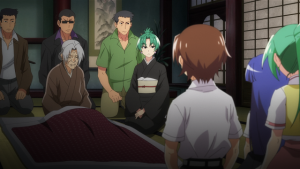 Higurashi: When They Cry – GOU #12 – Even though Satoko is still suffering and Teppei is now taking his annoyance out on the local shrine (the knocked-over statue is of Jizō, a guardian of children), Child Protective Services still won’t budge. To take the next step, Keiichi must unknot a complicated political situation that leads a showdown with the dowager empress of the Sonozaki clan.

The town turned on Satoko’s adopted family because her parents supported the building of the dam. That led to their mysterious accident, but it also left everyone too afraid to show the kids any support. Keiichi asks who he needs to punch to set everything right, but his enemy is plain old groupthink and one person holding on to grudges for far too long.

The confrontation with Oryō is the final scene from the closing credits to come to pass, but with some difference in details. The version in the credits has Mion in her white kimono, and she and Shion don’t appear to have that many allies with them. But the final-credits montage has vanished anyway, perhaps representing Keiichi managing partial success in this trip through the time loop.

But there’s still a lot to be figured out. We still don’t know who killed Satoko or Rika in either of the past loops, or Mion along with Satoko in the last one. And this arc probably only has one more episode to cover the Watanagashi festival and everything that follows. 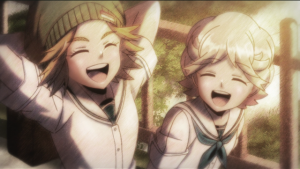 Talentless Nana #12 – There’s a murder to solve and someone is randomly killing animals, but Nana becomes completely focused on saving Michiru. Because she’s useful to the mission, of course, and not at all because Nana actually likes or respects her, nope nope nope. Plus Nana’s trainer is coming to check her work up close.

When Michiru is well again, Nana has learned a lot about Michiru’s past and motivation, but she still hasn’t sorted out what exactly was on Michiru’s mind the past day or so. Nor is there a clear explanation for why Michiru fainted, but the fact that it was right after healing the cat, and that Nana may be starting to fall ill after injuring herself, and that Kyōya’s detailed post-mortem is throwing up some kind of toxic vapors, suggests someone being able to add sickness or poison to a wound.

It’s interesting, as a sidenote, that both Nana and Tachibana are serial killers but they both draw the line at animal abuse. Neither is killing for the fun of it, but because they believe they are justified in doing it. Tachibana, though, may wind up helping deprogram Nana. 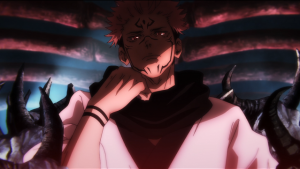 Jujutsu Kaisen #12 – Yūji and Junpei scuffle, but it’s when Mahito turns up that the fight gets serious. Junpei was always just a tool to the real goal, which is to draw out Sukuna. Mahito has, however, overlooked the possibility that Sukuna will simply not be impressed with him.

Being an equal-opportunity jerk, Sukuna also refuses to come out to help Yūji save Junpei, the result being that Junpei goes from future BFF to completely dead in a matter of seconds. This forces Yūji into the choice he was trying to avoid just last week, where he has to seriously consider obliterating his opponent.

He doesn’t have the strength to do it yet, at least not to Mahito, without Sukuna helping him. Sukuna may be quietly preserving his body, though, given that Yūji can claim to be “fine” while walking around with multiple holes through his torso. Next, he and Nanami will have to work together to take Mahito down. 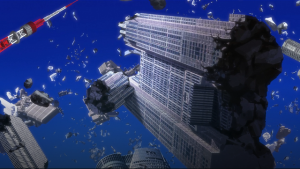 Akudama Drive #11 – As any long-time cyberpunk fan could have guessed, Kanto is not a prosperous city full of completely normal people. Instead, the Shinkansen arrives at a zone of altered reality littered with famous bits of Tokyo, housing one incredibly powerful supercomputer.

The second half of this episode is our big action sequence, but it mainly reminds us that no director has ever really grasped what actual computer hacking is like. Much more compelling is the part where the Swindler and the Courier find themselves on Bunny and Shark’s side of the monitor screen and the Hacker has to alter their reality to knock them out of it.

Likewise, the idea that the Brother and Sister can ultimately sustain themselves against all the laws of physics does not compute, and it’s probably just as well that nobody even tries explaining why a bunch of tourist attractions are now floating around with no apparent intervention from gravity. Akudama Drive is leaning harder than ever on the Rule of Cool to sustain itself.

The Hacker pays for saving the kids and the other Akudama with his very existence, it seems like, but I would bet on any proper hacker to have a backup copy of himself saved somewhere. Probably connected to that mysterious icon that popped up on the Swindler’s phone at the end. 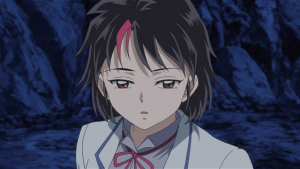 Yashahime: Princess Half-Demon #12 – Tōwa, Setsuna, and Moroha all accidentally wind up on the exact same mission yet again, but it all goes wrong when Tōwa is struck by a mysterious affliction. Luckily, the cure is just to wait a bit until she can easily dispatch the monster of the week.

The idea of the new moon temporarily neutralizing half-demons does appear to originate with InuYasha, so this episode is a round of “Remember that thing? We did!” for long-time fans. However, having introduced it, new rules have to be added to explain why it only affects one of our three demon-human hybrids. In Moroha’s case, she’s not enough of a demon, okay, fine. For Setsuna, having her memories stolen also somehow affects her physical reaction to the moon, which, sorry, makes no sense at all.