An interview with L. Starfyre, author of “risqué and not for the timid” SF Romances, on inclusion in the What Lies Within anthology 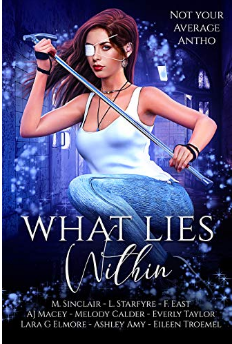 Among the many anthologies releasing of late, the What Lies Within collection was interesting for its mixture of genres, from contemporary to science fiction romance. Additionally, the organizer Sarah Klinger states all proceeds will be donated to The Epilepsy Foundation. I reached out to the only SFR author in the group, L. Starfyre,for a brief discussion of her story spark. Ms. Starfyre is well known in SFR circles for tackling timely, often difficult subjects in her romances. As she herself says on her official Facebook page: “her books are risqué and not for the timid.”

The anthology’s blurb: This thrilling and inspiring collection of stories, features a strong set of characters that each face their own challenges and perceived setbacks in life. Find out What Lies Within each of these inspiring stories and watch as the characters learn to accept what makes them special. This collection features a series of fascinating short stories and excerpts for upcoming novels – all written by your favorite authors.

Could aliens be the answer to Samantha’s problems? Would she finally find someone to love her and accept her for who she knew she was in her heart?

Veronica Scott for Amazing Stories Magazine: What was the inspiration for your story in the anthology?

LS: While keeping up with current events, it broke my heart how society has marginalized people because they didn’t fit into society’s idea of what a person should be like. I started with writing about curvy/BBW women and went on to write about gay men.

Sam is about a person who was born with male genitalia but self-identifies as a woman. She has a rough time because her parents can’t accept who she is and they lock her out of their home when she is only sixteen.

Because Sam is without a car, home, or money, I thought about the homeless teenagers who have run away from horrors at home and how they can never make it to ‘normal’ because society doesn’t have viable options for teenagers running away from physical abuse or incestuous situations. Some people just don’t understand that being with someone’s biological parents isn’t always best.

I’ve known some women who ran away from some of those situations. What upsets me is that the victims are often then vilified by media and society. Many of the characters share a background with people I’ve known in real life. I don’t use their exact stories because I want to protect the victims and because I write Sci-Fi Romance/Fantasy. 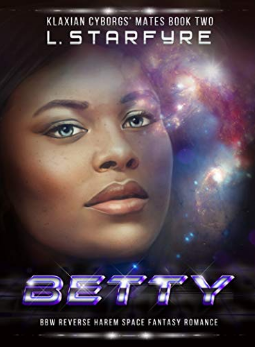 LS: I’m also writing other stories in the Klaxian cyborgs series and Xaerd series. Clark: Hyper Omega Space Fantasy Romance is a male pregnancy story and will release shortly after the anthology. Then the third book in the Jennifer’s Diary (Xaerd Mates) series will release; it answers many of the questions readers may have had from the first two books. Pri, young mother of three whose husband died, will be getting her own book in the Klaxian series. We first read about her in Betty.

I’m also planning on doing spin-off series from both the Xaerd mates and the Klaxian Cyborgs’ Mates series. One of the potential series is about the grandparents you run across in the other books, such as Gran from Zoe, Grandma from Betty, Joe’s grandpa from Betty, Abuela from Sam, and more.

ASM.: Many projects to keep you busy and your readers happy! What’s in your To Be Read list?

LS: Laughing, that’s an extremely long list but to name a few:

My Boyfriend Is An Alien: A SciFi Romance (’90s Nostalgia Fated Mates Book 1) by Athena Storm

To learn more about L. Starfyre and her books, visit https://www.facebook.com/LStarfyre/

Note: The What Lies Within anthology also includes stories by the following authors:

Nemo Rising by C. Courtney Joyner is a fitting addition to the storied character’s legacy.

The Drake Equation is a hilarious sci-fi adventure with just the right mix of heart and humor.

Mars in Books and Movies, but Where’s the Dramatic TV Series?

Serial Box’s Orphan Black: The Next Chapter Is a Mostly Successful Experiment in Transmedia Storytelling