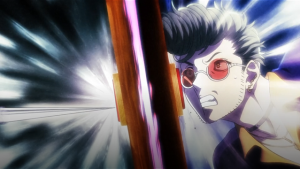 Akudama Drive #4 – The Black Cat lays out the heist the Akudama have been gathered to accomplish: break into the most securely guarded train station in Kansai under a strict time limit so that they can force their way onto the Shinkansen heading for parts unknown. But their activity has come to the attention of the highest authorities, and the Executioners are coming for them again.

According to the Boss Lady, groups of Akudama occasionally organize but never quite with this many high-powered people all at once. The difficulty the Black Cat has had getting everyone pointed in the same direction helps speak to why. But when they do work as a team, they are highly effective.

So who might be behind this team? Well, it’s someone with unusual resources, since they’ve already got a device from the Kyushu Plant lying around, and someone who seems interested in striking a blow against Kanto. The one person who might fit that description so far is the Boss Lady herself. As a high-ranking official, she would have privileged access to information about Kanto, and might especially resent her territory being held down by it. Since she gives orders to the Executioners as well, she has a handy way to clean up if the latest team doesn’t meet expectations. Or she can arrange for resources to be misallocated if she wants to make sure they survive.

As long as we’re getting paranoid, this week’s lesson about Kansai makes a point of mentioning that some Executioners go undercover as Akudama. If one of the team is secretly an Executioner, who might it be? My guess would be the Hoodlum, as someone who wasn’t on the guest list and started in police territory. 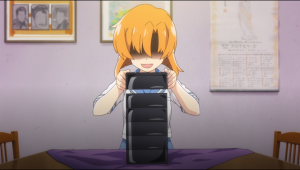 Higurashi: When They Cry – GOU #4 – Keiichi fights his rising paranoia about Rena, and just when he’s convinced himself that it’s all in his head, it turns out Rena has brought him a piping hot bento of MURDER. And then things go downhill even from there.

A couple episodes ago, we learned that Rika was aware of a time loop affecting this period in Hinamizawa. It seems odd, then, to see her encouraging Keiichi to trust Rena. But then her last comment, about him “winning”, suggests that she’s trying to set up that final confrontation where he and Rena have to fight to the death.

At any rate, it doesn’t seem to have worked out for her. She and Satoko are dead, and Keiichi is carrying Oyashiro’s curse (or a serious case of psychogenic illness). So back, it seems, the story must go, for another try. 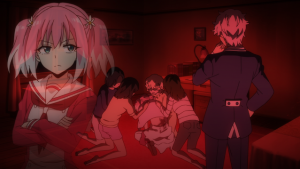 Talentless Nana #4 – Kyōya has strong suspicions, but he has no evidence, so Nana is able to throw him off for the time being by staging an attack on herself. More than that, she’s able to gain the trust of the entire class, seize the leadership for herself, and start controlling what everyone does. Well, everyone except for the guy who does have evidence of what she’s up to.

Just like in any good murder mystery, someone has compromising photos and terrible judgement about what to do with them. Rather than make sure more people know about the pictures, Hatadaira decides to confront Nana alone to give her a chance to explain herself, thus giving her the chance to do something about it.

Interestingly, since Hatadaira can tell the future, he’s had the psychic photo of Nana pushing Nanao off the cliff since before it happened. She’s lucky he’s so fatalistic, but why not start trying to warn people after Nanao disappeared?

At any rate, she knows Hatadaira will come to the PE shed at 10am or 10pm sometime, because he believes that he can’t change things. But that doesn’t mean Nana can necessarily strangle him in the manner shown. She’s looking into poison lately, so she could just as easily kill him that way and then pose for the picture. 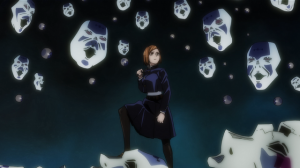 Jujutsu Kaisen #4 – An especially nasty evil spirit is taking form at a local juvenile detention facility, and all the experts are busy. So the first-years are sent in to reconnoiter, except who believes that they aren’t going to try to take it down?

Yeah, this whole thing smells like a setup. The scenario is exactly the thing to force Yūji to let Sukuna loose. Gojō, or someone above him, is betting that Fushiguro and Kugisaki will be smart enough to run away, and that Yūji will let Sukuna take over, and then be able to regain control. I’m curious what Plan B is if Yūji fails. The occult equivalent of nuking the site until it glows, I guess.

By the end of the episode, it seems like Yūji can’t retake control of his body. But I wonder if it’s less that he can’t and more that it seems like a bad idea, what with being in Sukuna’s paranormal domain and all. 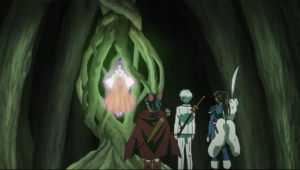 Yashahime: Princess Half-Demon #4 – Moroha and Setsuna find the 21st century pleasant in their own ways, but back to the Sengoku Era they need to go if they’re going to recover Setsuna’s memories. So it’s back through the time tunnel in the Tree of Ages, which has its own quest in mind, and if the girls don’t want to help, well, they can get themselves stuck in the past until they’re ready to change their minds, as far as the Tree cares.

So according to the tree, Sesshōmaru should have been the heir to the demon throne for western Japan, but he can’t be bothered to take it up, while the king of the demons of eastern Japan has taken advantage of the power vaccum. Which means this is now the same show as Akudama Drive in a way, because Kansai and Kanto are the names for western and eastern Japan.

The number of absent parents is multiplying. Setsuna has lost the memory of her father as well as her sister (suggesting that the encounter with the dream butterfly happened shortly before she was dropped off at the human vilage). Moroha sounds like she’s never really known her mother.

To top it all off, the butterfly floating past the Tree of Dreams at the end suggests that the spirit of the tree is somehow connected to the loss of Setsuna’s memories. Something very complicated is afoot. This is what a show can do when it can comfortably assume that it’ll be on the air for many seasons to come.