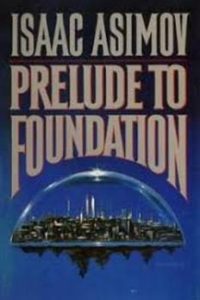 “Don’t you see, man?” said Cleon. “Don’t you see? There’s your use. You don’t need to predict the future. Just choose a future–a good future, a useful future–and make the kind of prediction that will alter human emotions and reactions in such a way that the future you predicted will be brought about. Better to make a good future than predict a bad one.”

Seldon frowned. “I see what you mean, Sire, but that is equally impossible.”

The problem with the Foundation saga was that it had reached a point where it would have to either confront the elephant in the room openly, continue in a form of stasis for the remainder of the series or introduce a new element that would be an ‘outside context problem’ that would shatter the universe beyond repair. A spy story might develop into an outright war story, but – if it did so – it would no longer be a spy story. Asimov either couldn’t or wouldn’t bring himself to destroy the series in order to save it. Instead, he took a look back at the early days of Hari Seldon and how he laid the groundwork for both the First and Second Foundations.

This was, in many ways, a serious challenge. To reveal elements hidden behind the curtain is to risk devaluing the character. The Wizard of Oz cannot be taken seriously once you realise he’s simply a man behind the curtain. Books written after the character has done his work and walked offstage are inevitable tainted with hindsight. The Thrawn Trilogy and The Hand of Thrawn duology are brilliant beyond words, but looking back at Thrawn’s past tends to ruin the mystery. Both Outbound Flight and Thrawn have the same problem. Young Thrawn is very clearly the Grand Admiral in embryo.

Asimov’s challenge, therefore, was to integrate the legendary Seldon with Young Hari, to create a character who could grow into the Hari Seldon of Foundation without actually making everything look inevitable. He needed to suggest there were challenges facing the young man, even though everyone who read the books knew Seldon would survive. And, to be fair, he largely succeeded. Prelude to Foundation works, at least in part, because it represents a slight genre shift within the universe without invalidating the rest of the series.

Hari Seldon is introduced to us as a young mathematical genius who, in a public speech, proposes the possibility of psychohistory. This swiftly attracts the attention of Emperor Cleon and his Chief of Staff, Eto Demerzel. They want to use him … or, when it becomes clear he won’t be used, make sure no one else gets to use him. Forewarned by Chetter Hummin, cautioned of the danger of Demerzel, Seldon starts a road trip across Trantor, picking up friends and allies at every stop until they reach the Wye sector. There, they discover that the Mayor of Wye intends to use psychohistory herself to make a bid for the throne. Unfortunately, troops have already arrived, led by Demerzel himself.

At that point, it is revealed that Demerzel and Hummin are the same person – R (Robot). Daneel Olivaw. Daneel, already hundreds of thousands of years old, is also looking for a way to understand and guide humanity. He sees psychohistory as the key to securing a better future for the human race. Seldon, realising the importance of what he’s learned on the road trip, finally understands how to start turning theory into practice …

The key to making Prelude to Foundation work is Seldon himself and, like many of Asimov’s other scientist-heroes, he works. He’s both bright and slightly naive, which may have been ‘encouraged’ by Daneel to ensure Seldon went without argument; he’s very much at the start of his career, with the signs he’ll grow into a great man with flashes of intuitive genius. It takes him longer than it should have done to realise the true nature of his ‘hunter,’ but it is fairly clear he had no reason to suspect the truth until it was too late.

That said, many of the supporting characters are a little simplistic. The Emperor shows flashes of something greater, but – as Seldon realises – he’s a prisoner of his role. The others come across as gems within dross, people of importance who don’t look important. And Rashelle ,the Mayor of Wye, reads rather awkwardly these days.

Asimov presents two major female characters in this story, Dors Venabili (who may be a robot) and Rashelle of Wye. Both of them are distantly odd. Dors is an action girl who poses provocative questions, yet seems willing to be a dainty lady-love for Seldon at the end of the book. This may be explained by her being a robot. Rashelle is nothing like the Mayor of Foundation’s Edge; she comes across as a power-mad woman, blaming her defeat on sexism rather than her own failings. That said – to be fair – Daneel was manipulating the minds of her generals to make them reluctant to take orders from a woman. And Seldon deserves credit for recognising that there was no reason for the problem to appear suddenly, unless someone was pulling strings from the shadows.

The true star of the story is Trantor itself. Seldon realises that the planet is the empire in microcosm, each sector part of the whole and yet semi-independent, each one pulling and pushing at the others in equal measure. It works as the key to psychohistory, an elegant solution to a seemingly-impossible problem. And it also draws on sad reminders of the Robot books, with the last descendents of Aurora becoming what they hated and feared during their long lifetimes of glory.

In hindsight, of course, the dangers faced by Seldon are largely artificial, designed to show him different aspects of Trantor. The questions posed to him are designed to spark his thoughts. And yet, they work very well. Asimov took the problem with a prelude novel and actually made it part of the story. Rereading the story is a delight because you can see how well he crafted it, first as a new reader and then as someone who knows the punchline.

Overall, Prelude to Foundation works better than it should. It is crafted so well that it’s weaknesses become part of the plot. In many ways, it is the most admirable book in the series. And yet, it isn’t the best. It stands outside the established universe and, as such, is harder to consider part of it.