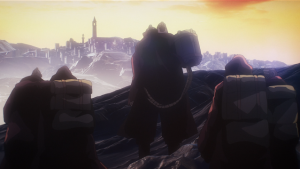 No Guns Life #22 – Tetsurō thinks over everything that’s happened, everything he’s learned, and all the talks he and Inui have had, and makes his final decision. Despite his promise to never take over Inui’s body again, he feels he has to use Harmony to help win the fight against Seven and Berühren. Only Tetsurō somehow accesses Inui’s memory and winds up watching the end of his time as an army man.

The army does have a habit of sweeping its mistakes under the rug in the most lethal manner possible. Remember that the Norse Scott massacre was engineered to cover up illegal experiments (possibly the same one Victor worked in). The difference there is that Tokisada understood and embraced what he was doing in arranging it. Inui’s handler makes it clear he doesn’t approve of hunting down and executing the rebels, and Inui himself keeps his real and figurative blinders on until the moment that the deed is done. Then it finally dawns on him that “I was just following orders” is not an acceptable excuse.

Seven is still the loyal soldier who doesn’t look beyond his function as a tool. He’s not angry at Inui for killing their comrades, just jealous of another tool for possibly being more prized than him. Now that things have already escalated to full-on combat mode, is there any chance of convincing him to see things differently? 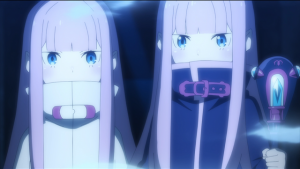 Re:ZERO -Starting Life in Another World- #35 – Subaru can do nothing about Satella, the Witch of Envy, swallowing up everyone. But his discovers that Echidna has given him a weapon, plus administrative powers to Sanctuary, plus briefly being part of one big telepathic stew has given him the last few bits of information he needs. And then everything seems to fall into place: Emilia isn’t feeling hopeless, Garfiel can’t stop him, and he can get back to the monastery and get everyone out of harms way before having a nice long talk with Beatrice.

Once again, Emilia likes Subaru best when he drops the light-novel-protagonist act and starts behaving like a real human being. One of these days, he may figure it out. In the meantime, it’s enough to give her the confidence boost she needs, which may be what helps her make it through the trial.

One final intriguing clue not shown to Subaru (though maybe he picked it up when everyone got absorbed) is that Roswaal also has a book like Beatrice’s. Does that mean he, too, has been following someone’s instructions to help Subaru all along, and if so, whose? 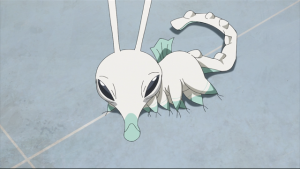 Deca-Dence #10 – Natsume conveniently faints so that Kaburagi doesn’t have to explain the entire real history of Earth to her, but after escaping and exchanging angry words and heartfelt letters, they work things out and it’s all good. Except for all the cyborg heroes being on the run, Natsume getting cornered by Huginn and Muninn, and the huge artificial-flesh-monster shambling right toward her home.

I don’t remember a single bit of foreshadowing about Gadolls being able to parasitize Gear bodies, so Deca-Dence had better come up with a very, very good explanation for this next time. At any rate, the story does now have a convenient way of wiping out the Gears and shutting the game down for good.

Another thing that could use some explanation is the complete lack of worry in Tanker land. Sure, the Gadoll have vanished, but that means that their main food source is gone. There aren’t even any plants to eat in their trackless wasteland. It’s like they already know that the author has written in one last feast for them. 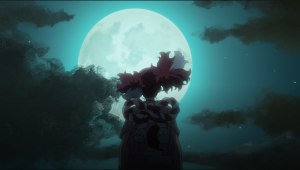 Appare-Ranman! #11 – Kosame is on the brink of death, but thanks to one car being left undamaged and blood group matching having been figured out about twenty years earlier in this timeline than ours, he lasts long enough to keep everyone in suspense and then pull through. Now the race is back on— after a little detour to deal with Gil.

This felt very paint-by-numbers. Of course Appare will have a low point and then regain his spirit; of course things will look hopeless and then turn around. With the shot of Kosame with the cloth on his face being included in the preview last week, it follows by preview logic that it was going to be a prank.

Speaking of painting though, props to whoever produced all that atmospheric background art of 1890s-ish Omaha. That was easily the best thing about this episode.