Disney’s live action Mulan criticized for filming in province where Uighers are interred and for praising Chinese propaganda office.  (Mini Editorial:  this is an exemplary illustration of the expression “lie down with dogs, get up with fleas”:  Disney has censored its films and given support to Chinese propaganda in an effort to gain access to China’s market.  Now, it’s film is paying a price at the box office because China is suppressing news reporting on controversy surrounding the film.  This is also an example of exactly what could happen with a Chinese WorldCon:  all of the best of intentions twisted into propaganda for genocide.) More. And More.

Science magazine, in publication since 1880, denounces Trump in an editorial.

Joseph Zitt’s The Book of Voices is on sale

Afrofuturism draws from the history of the African diaspora

An Infographic attempting to explain what “speculative” is

Take a tour of the Pillars of Creation 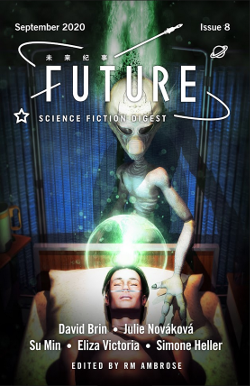 The latest issue of Future – #8 – has been released.

We Have a New Administration