What’s a “movie novelization”? Steve tells you about two of his favourite movies that were novelized. Was it well done? Yes… and no. Read it and find out!

This is the third and, probably, final time I’ll write a column about my favourite film action hero of the sixties. As you can see from Figure 1, it’s not about James Bond or even John Steed of the Avengers (pre-Marvel). No, it’s about two films starring one of the two “coolest dudes” in Hollywood at that time; the other one was Steve McQueen (whom I once told to go to hell… that’s a story for another time). James Coburn starred in a duet of “superspy” movies, but refused to do a third, to the sorrow of Flint fans everywhere (he saw what happened to Bond, and didn’t want to be typecast). The difference here is that I’m going to be talking about the novelizations of these two films. I hope to make it shorter than my more recent columns.

When I buy a movie novelization or tie-in (I’ll get to “what’s a tie-in?” later), I do so because a) I’m a reader, despite my love for, and fascination with, films; b) I want to relive a pleasurable experience of a movie I liked*; and c) perhaps get some inside info or stuff that wasn’t in the movie, or how to spell characters’ names, and stuff like that.
*When I watch a movie, I’m separate from the movie; I’m an observer. But when I read a novel, I’m a participant; I see the action and people in my mind’s eye—I’m there!

A well-written novelization will put me back in the world of the movie (as a participant); sort of “double your pleasure.” Contrariwise, as the Tweedle brothers (remember them? Dee and Dum) say, a badly-written on won’t let me enter that mind’s eye participation and will, in fact, tick me right the heck off! Such a novelization is Jack Pearl’s Our Man Flint (Figures 2 & 3). 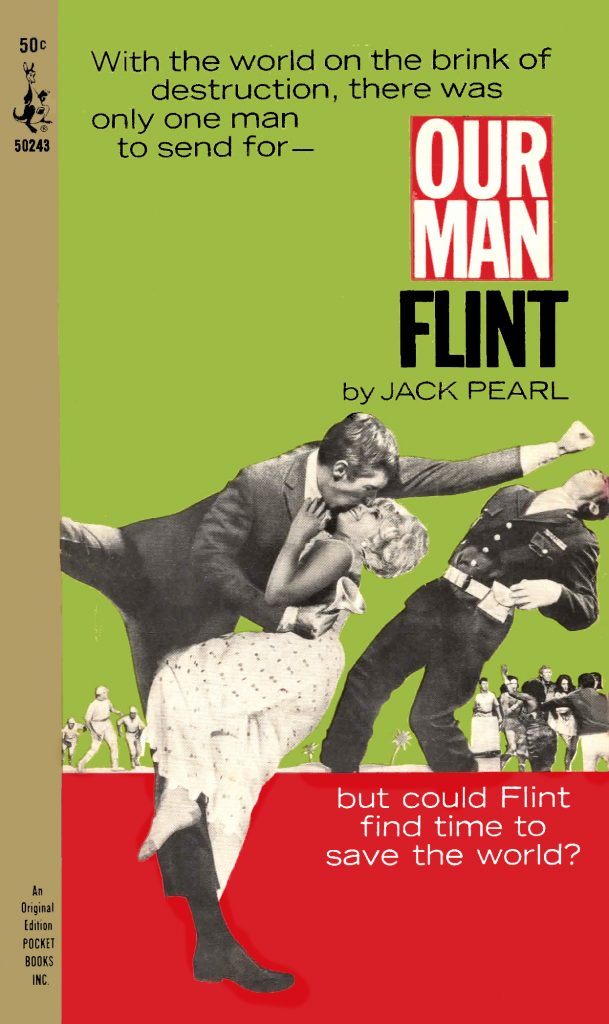 I have a number of friends who have written novelizations and movie tie-ins, so I asked some of them about their experiences. Boiling it down, I was told that the publisher would hire them about 8 months before the movie came out, giving them a script to work with. They would be asked to sign a non-disclosure agreement, and given a deadline. Some publishers would allow them some leeway on the adaptations from script to book; some would insist that they follow the script precisely. In some cases, the script would be an earlier draft rather than a final shooting script, so in those cases, the book might not resemble the movie a whole lot. (I choose to believe that Mr. Pearl is not as bad a writer as this book makes him look; maybe he had a very unfinished script to work from). In one case I’m aware of, the script as furnished didn’t have an ending, so the writer was allowed to make up his own ending… and he says the movie’s ending actually resembled what he’d made up.

We SF/F fans are an odd bunch; many—if not most—of us can quote at length from films we enjoyed (not to mention TV shows: how many of you can do a full Monty Python skit—maybe the “Dead Parrot”?) and don’t appreciate when dialogue is changed between what you saw/heard, and what you are reading? I’m one of those, and there are substantive changes in the dialogue in Our Man Flint the book, not to mention other changes.

For one, he made Cramden’s first name “Bruce.” (It wouldn’t have been a big deal except that the second movie made it “Lloyd,” so I can’t make the mental switch from “Lloyd” to “Bruce.”) For another, Flint flies to Marseilles to find a certain café or restaurant that makes bouillabaise a certain way. In the book, he goes to New Orleans. Instead of British secret agent 0009 in the film, Flint interacts with agent 571. Not only does it lose the joke, but it’s tone-deaf, in my opinion. Instead of Rome, Italy for the HQ of the Exotica Beauty Company, Flint goes to San Francisco. After bedding Gila, in the book, Flint pinches her behind… which is something Derek Flint would never do, because he’s a gentleman. Und so weiter. I could continue, but I won’t. Suffice it to say that this book did not, and does not, provide me with that experience I wanted. Pearl, by the way, has done a number of other novelizations, including The Yellow Rolls Royce, Funny Girl, and Robin and the Seven Hoods.

In contrast, In Like Flint, by “Bradford Street”  (pseudonym of Al Hine, 1915-1974), is extremely close to the finished film. I find little to complain about in this novelization of what has to be close to the shooting script. (Plus there are no—or few—obvious authorial intrusions as there are in the Pearl book.) If you enjoyed the film, you are certain to like this book. (As you can see, I’m not going to go over the plots of either book here; that would make this column full of “spoilers,” and I’m reliably informed that some people have yet to see one or both films.) This film, especially in Flint’s interactions with the women in the movie, shows that Flint can be (as I heard one person say years ago) “suavé and deboner.” And there are, naturally, considering when it was made, certain signs of male privilege but, I think, fewer than one would expect.
Hine was a prolific writer, not just of novelizations and tie-ins, and he produced at least one original novel that was made into a movie—the reverse of what he often did. His novelizations include (besides this one)  The Unsinkable Molly Brown, Help! (The Beatles), The Glass-Bottom Boat, several episodes of I Dream of Jeannie, and a couple more. He also wrote tie-ins; that is, original novels based on a movie or TV show, but not based on any particular script; as well as a couple of Nick Carter: Killmaster books (a popular series). I am hoping to have more information on novelizations and tie-ins in an upcoming print Amazing Stories® magazine. By the way, my thanks go to Thom Walls of Renton, Washington, for the two books I’ve wanted for a long time!

Before I go, may I remind my fellow Canadians that voting for the Aurora Awards is open until July 25; if you are not a member of CSFFA, the Canadian SF/Fantasy Association (you have to be a member to vote, but it’s only $10/year), you can go to https://prixaurorawards.ca/ and pay your fee. If you have paid, then just go there and vote. This column is in contention for the Fanwriting-Other, I believe.

Comments are welcome. Comment here, or on Facebook, or even by email (stevefah at hotmail dot com). All your comments—positive or negative—are welcome! (Just keep it polite, okay?) My opinion is, as always, my own, and doesn’t necessarily reflect the views of Amazing Stories or its owner, editor, publisher or other columnists. See you next time!

This week, Steve reviews the new F. Paul Wilson book, and finds it a thrilling, fast-paced read. If you’ve never read any of F. Paul Wilson’s books, this would be a great one to start with!

Who has the most iconic villains in the land? Read on to find out.