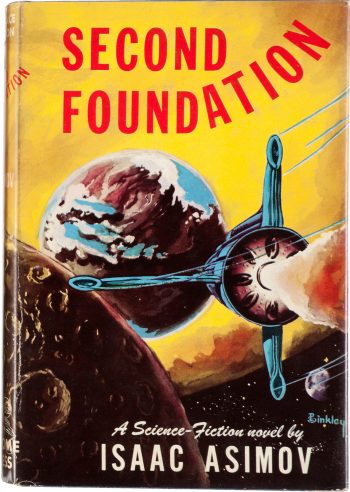 And the mere fact that it does is a very clear sign, as Asimov will explore later, that both the Mule and the First Foundation were unsuccessful.

A bit of background first. The First Foundation was designed to become an ever-expanding galactic polity, steadily absorbing more and more worlds until it encompassed the entire galaxy and become the de facto second empire. The Second Foundation, by contrast, was a small group of psychohistorians and mind-manipulators who were charged with keeping the Seldon Plan on track. (Precisely how the characters of Foundation and Empire deduced the nature of the Second Foundation is never really explained.) Very little was known about the Second Foundation, ensuring its survival in a hostile universe. Given the way things worked out, it should have been reasonably possible for at least some people to deduce it’s true location. The one clue – ‘Star’s End’ is, as the First Speaker of the Second Foundation notes, a little more revealing than they might have preferred.

Instead, Asimov shows us most of the story through the eyes of the searchers. In Search by the Mule, the searchers are the Mule’s agents, searching as lightning rods for their master. They are fairly traditional space opera characters, although not – perhaps – the type of people one would expect to search for the Second Foundation. This is actually a plot point, as the whole search is actually a lure to draw the Mule into a position of weakness. The sheer oddness of the choices actually works in his favour. In Search by the Foundation, the searchers are a loose organisation of scientists – again, Asimov uses them rather than more traditional characters – and Arkady Darell, the teenage daughter of one of the scientists (and the granddaughter of Bayta Darell.)

Arkady herself is the second major female character within the series and, by modern standards, she can be pretty hard to like. On one hand, she has a precious and intelligent personality; on the other, she’s more than a little manipulative and manages to cause no end of problems (for all sides) when she takes it into her head to become an unofficial member of the group. For the time, she’s still a pretty major step forward … which makes her position at the end, as unwitting instrument of doom, all the more tragic. Indeed, in hindsight, most of her actions can be explained by subtle prompts to involve herself in the search.

But, characters aside, the novel has a far deeper problem. The Second Foundation is both hero and villain. In the first story, their bid to catch the Mule at a vulnerable moment ensures the deaths of hundreds of thousands, perhaps millions, of people. They justify it to themselves by claiming there would have been billions more deaths, if the Mule’s empire fell to civil war after his inevitable death – the hell of it is that they might well have been right – but it sits ill with us today. They could probably have found a way to assassinate the Mule, if they’d tried, although that might have triggered off the civil war anyway. Their assurance they were right is sickening.

The problem becomes much worse in the second story, where it becomes clear that the Second Foundation has few qualms about exerting mental influence over the First Foundation to keep it on the straight and narrow. Their planning is so good that they are able to influence Arkady literally from birth – the First Speaker, rather patronisingly, insists it was for her own good – and spark off a war to ensure that the apparent destruction of the Second Foundation took place at a time when the First Foundation was riding high and didn’t think it needed the Second Foundation any longer. They may think they are acting for the greater good of the galaxy, but they are – in truth – telepathic overlords capable of reducing or removing resistance with minimal fuss. Are we meant to cheer their victory or mourn?

In earlier reviews, I noted the Foundation was extremely self-confident and was, in many ways, riding for a fall. (Civil war was on the way well before the Mule arrived.) By this book, the Foundation’s confidence is gone. It might have thrown off the Mule’s shackles when he died, and it’s clear the Second Foundation ensured he’d be making preparations for his death, but it is torn between fear of the Second Foundation and a touching belief that it will intervene to protect the First. The Second Foundation is entirely correct to say the First Foundation must believe it has destroyed the Second Foundation, but – once again – it suggests a cold pragmatism and devotion to a higher calling than anything more humane.

And really, fifty-odd Second Foundationers are not enough to maintain the Seldon Plan.

This is the point, I think, where Asimov started to quietly acknowledge the limits of psychohistory. The Mule shattered the Seldon Plan. There was no way to predict his appearance, his empire and how matters would shake out following his death. His distribution of nuclear power ensured the Foundation would face newer – and unpredicted – threats and each of them would set off their own chain of unpredictable events. And the sheer size of the galaxy works against him. The arc might have made some sense, given what Asimov would have known about technological development, but by the time of this book it has fallen apart. There are also too many oddities, too many conclusions that don’t make sense. Why would the Second Foundation be based on the other side of the galaxy? Why would the Second Foundation be based on the Mule’s homeworld? Why would the Second Foundation be based on Terminus itself? In hindsight, the true homeworld is obvious.

… And that is what good literature is meant to do.