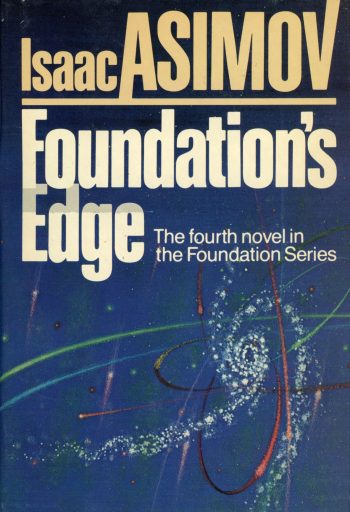 Trevize said, “And what does Gaia have to offer as an alternative?”

There is a quite considerable gap – thirty years – between Second Foundation and Foundation’s Edge. Asimov’s style shifted, so that – instead of a set of interlinked novellas and stories – there is one fairly complete novel, following two major characters and a small supporting cast. It works fairly well, for all that it turns the series concept on its head. But then, I think Asimov had no other choice.

The original concept had played itself out. The only way to develop the story was to have the Seldon Plan proceed to its conclusion or to have the First Foundation rediscover the Second Foundation, destroy it and proceed to establish the Second Empire ahead of time. Either one offered nothing new and Asimov knew it. He also, I think, had soured a little on the earlier concepts; he wastes no time in rubbishing the idea of conquering the remainder of the galaxy even though the First Foundation is a true hyperpower. He also makes it clear that the Second Foundationers are little better than the university leaders of The Encyclopaedists, regarding themselves as an elite who will take the reins of galactic power when the Second Empire is established. The creepiness of the Second Foundation is replaced by bureaucratic wrangling that, in many ways, manages to be even more creepy. These incompetents are unworthy to rule.

In the aftermath of a Seldon Crisis, Councillor Golan Trevize challenges the Mayor of Terminus, Harla Branno, over the seemingly settled matter of the Second Foundation. Has it really been destroyed? Mayor Branno responds by exiling him – and an academic, Janov Pelorat – with instructions to find Earth. Trevize leaves reluctantly and finds himself drawn towards a mysterious world. Earth, the legendary homeworld? No, Gaia; a planet-wide mind that may offer a final solution to the galaxy’s problems.

Meanwhile, on Trantor, Speaker Stor Gendibal discovers proof that someone is manipulating galactic history on an incredible level. This is terrifying to the Second Foundation, at least partly because that’s what they’re trying to do … but the newcomers appear to be vastly superior in both understanding of psychohistory and mental manipulation. After proving his case to his fellows, Gendibal leaves Trantor and follows Trevize to Gaia.

Gaia, it turns out, is a living world, formed by the robots to serve as a giant entity that will absorb humanity into a single collective consciousness. It offers a way out, at the price of losing a certain amount of individuality. Trevize, the man who is always right, is asked to judge. Who should inherit the galaxy? The First Foundation, represented by Branno; the second, represented by Gendibal … or Gaia? Trevize plumbs for Gaia, but even he is unsure why it is the right decision (a question Asimov explores in the final post-Seldon book, Foundation and Earth.)

It is clear, right from the start, that Asimov’s talents have improved. This time, there are three interconnecting sets of characters who make their way steadily towards Gaia. He neatly represents the viewpoints of both the First and Second Foundations before deconstructing them by pointing out that both have severe limits; they are both doomed if they attempt to create the Second Empire. The earlier creepiness factor surrounding the Second Foundation is made worse by the simple fact the Speakers, as shown in the early chapters, are utterly unfit to rule; the grim awareness that there might be another threat out there pervades the book until the threat stands revealed … as Gaia.

Indeed, Asimov neatly suggests Gaia might be something alien. He creates an atmosphere of a mystery star, one feared by all others (The Empire, the Foundation, the Mule), hinting that Trevize is heading towards First Contact. In some ways, the reveal is disappointing. The wonder and fear is gone, replaced by a mental union of pacifists (although they did give birth to the Mule, apparently).

He also carries on the tradition of having the resolution be something more than a mere battle, be it physical or mental. The judgement is posed as a debate, allowing the three speakers to make their case before judgement is passed. Asimov may have rigged it, as the cases are far from perfect. Of course, by this point the Seldon Plan is effectively dead.

This is clear even before Gaia comes into focus. The First Foundation’s massive advances in technology – Branno gloats that a squadron of First Foundation warships could best the entire Imperial Navy and never know it had been in a fight – threaten to change the galaxy, offering the prospect of destroying the Second Foundation and forging the Second Empire ahead of time. It also offers the prospect of a genuine post-scarcity society, with computers and starships that can bring the galaxy closer together. As Branno points out, Seldon could hardly have predicted the pace of technological advance. But then, how could he? For all he knew, the Empire had reached the limits of the possible.

Foundation’s Edge, in my view, is the strongest of the Foundation novels. It addresses the weaknesses of the universe’s premise, it has good characters – including two relatively strong female leaders – all of whom feel real. And it shows a vaster universe than any of the earlier books, hinting at histories unseen yet real.

The book’s greatest weakness, however, is that it ties the Foundation to the Robots universe. I don’t dislike the robots, but I think they’re a step too far for the universe. There is something creepy about their involvement, and their role in creating Gaia. They tend to hamper human involvement – and free will – in ways that damage the novels. What does free will matter if all the major characters throughout history have been influenced by the robots? What does that mean for the Seldon Plan?

Overall, though, it remains my favourite of the Foundation novels.