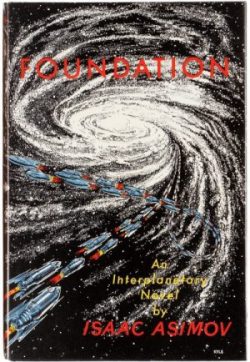 It will not surprise anyone who reads my work – specifically The Empire’s Corps – that the Foundation saga was a major influence. Indeed, it was one of my favourite sagas when I was in my early teens, although it is hard to say precisely why. Perhaps it was the belief, which I clung to in those days, that violence truly was “the last refuge of the incompetent,” a touching belief when I could never hope to be successfully violent. (These days, I am gloomily aware that violence is the last refuge of the incompetent because the competent have resorted to violence a long time ago (Howard Tailor?).) Or perhaps it was the simple truth that, for all they appear outdated, these books tell a story that still interests me. I may look at them with a more cynical eye, these days, and they have lost some of their lustre, but they remain great.

And yet, rereading the books leaves me with an odd sense of discomfort. On one hand, the books are trapped in a eerie future world that is both extremely advanced and yet, even by our stands, strikingly primitive. Both technology and social attitudes, particularly in the early books, are a strange mix of futuristic and outdated (although they wouldn’t have been outdated in Asimov’s time). On the other, there are striking parallels to our modern-day problems, from the failure to maintain society – a constant theme in The Empire’s Corps – to the resistance to invest in the future or even to adequately study the past. And, of course, the failure of many elected leaders – and even tyrants – to really come to grips with the problems facing them. Some of the problems were beyond recovery. Others – alas – were not.

The basic idea of the Foundation books, at least in their early form, is relatively simple. The (human-only) Galactic Empire is dying. Hari Seldon, a mathematical genius, has devised a science – psychohistory – that proves the empire is not only doomed, but the following dark ages will last for twenty thousand years! All is not lost, however. Seldon has devised a plan – the Seldon Plan – to ensure the period between empires is reduced to a minimum. A foundation – a colony on Terminus, a planet on the edge of the galaxy – will safeguard the volume of human knowledge, then serve as the nucleus of the next empire. Unknown to most, a second foundation has also been established. Their job is to keep the Seldon Plan on track. 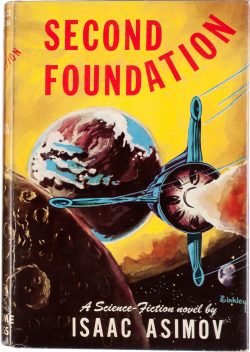 The Foundation books are, to use my earlier definition, literature rather than pulp. There is very little action and adventure, even when the Foundation is at war. The separate stories are presented as puzzles to solve or, in some ways, scenes for the characters to admire how Seldon set matters up to ensure there was only one possible outcome. (Precisely how well this works will be discussed later.) The heroes – and heroines – are cunning men and women, yet many of them operate within a framework that negates their actions. Indeed, only one hero – and one villain – can be said to have had the entire universe resting on their actions, the Mule and Bayta Darell, both of whom appear in Foundation and Empire. Others can easily be said to be as much villain as hero. Even by past standards, some of the heroes of Foundation itself are a little iffy. This is a point, to his credit, Asimov admits.

One can easily, of course, draw a line between the First Foundation and the United States, then another between the Second Foundation and the USSR. In earlier books, Asimov praised capitalism, progress (in the older sense) and what we might as well call economic imperialism. The Foundation evolves from desperate manoeuvring for survival – to the point it fosters a religion based on science, in a bid to protect itself – to an aggressive power that steadily absorbs more and more of the galaxy. This has, of course, lost its charm over the decades since WW2 and Asimov, well aware of this, cautions the Foundation not to overreach and fall. By contrast, the mind-manipulating Second Foundation operates like a mentalist politburo: it sees itself as the superior elite (a common delusion) and has no qualms about using mental powers to reshape history. The problems with this are obvious, particularly as the Foundation continues to develop technologically, and Asimov is quick to point them out. Indeed, Foundation’s Edge could easily be seen as both foundations running up against hard limits. Asimov may or may not cheat by introducing a third party, but it does offer a way out of either constant war or perpetual living death.

The core of the series, of course, is psychohistory itself. It was more convincing back when history looked safe and predictable, although Asimov should have known the fall of the Roman Empire did not lead to a steady return to unity. Does it work? It’s hard to say, at least partly because psychohistory relies upon its subjects remaining in ignorance. Even without the Mule – and Seldon himself, a point mentioned here – randomness should be a major problem. How different would history be, for example, if someone changed something very minor? There should have been a steady flow of decisions that took history off its planned course. Asimov solves this, in part, by having the Second Foundation influence events behind the scenes, but – in some ways – it is unsatisfactory. The General comes across as a cheat because the bad guy is defeated by the dead hand of history, not through heroic action. 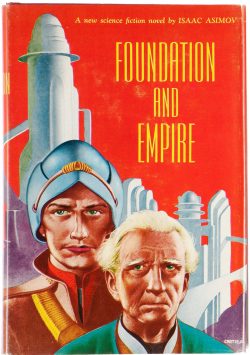 By modern standards, there is something inelegant about the Foundation books. The sense of historical determination robs the characters of agency (except Bayta Darell and possibly Golan Trevize) and this tends to grate. There are relatively few major female characters and none of them are action girls, although – again – Bayta may have a claim to be the only classical hero. (That said, major political figures in both foundations are female and no one expresses any problems with it; the only incident of naked sexism occurs in Prelude to Foundation, which may have been the result of mental tampering.) It’s hard to point to any characters and say they’re characters of colour. Indeed the hero characters are either Asimov’s heroes – scientists – and standard 50s heroes (political leaders, merchantmen, even a military officer/spy). Bayta (and her granddaughter, later on) are perhaps the most mundane amongst them (which actually becomes a plot point). It is greatly to Asimov’s credit that this worked as well as it did.

And yet, there is something crude about the series as a whole. Like Heinlein, Asimov was probing gingerly into unexplored territory. The tropes we know and love were new and different in his day. It’s far too easy to see where he welded canon from several different books to form a vast future history, even though I think this was a mistake. There’s something paternalistic about the conjoined universe that, I think, should have been avoided. It might have been better to leave the robots – and Gaia – out altogether, to have the series end with a final clash between the foundations, to answer the debate between predestination (as laid down by the Seldon Plan) and free will. But that was not to be.

And yet, they’re still worth reading.

I’ve decided to review each volume separately, as I have too much to say about some of them and too little to say about others. As always, I welcome comments and suchlike.

And so … forward to Foundation.

Chris Nuttall begins a series of retro reviews examining Asimov’s Foundation series that expanded from the original three volumes (which themselves were fix-ups from stories appearing in Astounding Science Fiction) into a much larger pantheon that eventually encompassed his Robot tales as well.  We’ll link to the series of reviews within each review as they are published.