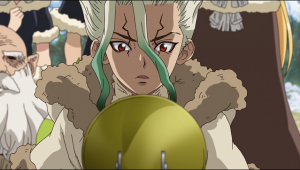 Dr. Stone finale – Apparently the peculiarly shaped tombstone made of cement was not enough to get Senkū’s attention. It takes a roundabout hint from a story about a bee and a numerical pun to finally clue him in. And when he finally puts it all together, he can give the villagers a glimpse of not just the technology but the immense culture that has vanished from the world.

There are a lot of things I’m willing to suspend my disbelief about for this show, but I am not buying that the Stone Age future is completely without music. It is such a universal human impulse to make music that the village must have some kind of it. Sure, it’s not pop music, and they could be wowed by the range of alien sounds coming from Senkū’s phonograph, but I can’t believe that they would have no idea what music is.

That complaint aside, Dr. Stone has found a good spot to rest before getting into the actual war sometime next year. Senkū has finally won over the entire village, and now the stage is set to see if the plucky heroes of science can prevail against the crushing might of Tsukasa’s followers. I will definitely be picking this up again whenever season 2 starts.

Incidentally, speaking of cultural continuity, I’m fairly sure at this point that Dr. Stone owes a debt to Vernor Vinge’s The Peace War and Marooned in Realtime. Parallels include a development that displaces people in time, a group of astronauts trapped in space, and people with advanced knowledge trying to restart civilization from almost nothing. 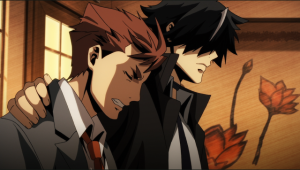 Special 7: Special Crime Investigation Unit #10 – Dead witness or no dead witness, it’s time for Warlock’s trial. It immediately takes another surprise turn he arrives as his own lawyer and then begins zapping people with magical death rays. Seiji reveals himself to intervene, Warlock explains what happened to him nine years ago, and pretty soon all of Unit 7 is on the same page. For all the good it does them now that Public Safety is out to get them.

So basically, Seiji messed up Warlock’s carefully planned black magic rite by just being too darn much of a goody-two-shoes. Warlock is able to use that against him for a moment by taunting him with what happened to Mizuwa, but sooner or later someone is going to remind Seiji about how the casualties would have been doubled if he hadn’t taken the power himself. To say nothing of what everyone would have been dealing with the last nine years with a fully powered-up Warlock on the rampage.

When Kiryūin contacts the team to let them know the full situation, what’s interesting is the question that isn’t asked. How did he know so much about what happened with Seiji and Warlock? Even if he didn’t know the exact details, he knew at the time of the shopping mall incident how to activate the power that Seiji has. It’s possible that everyone except Seiji already knows Kiryūin is something more than an eccentric bureaucrat. Hopefully Seiji will think to ask soon, because he’s going to need to know exactly how much help he has. 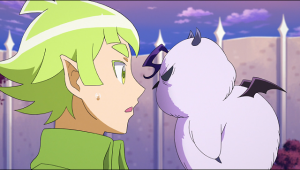 Welcome to Demon School! Iruma-kun #11 – A new teacher has belatedly shown up to train the new students in handling their familiars, which means a new round of humiliation for Kalegle. Then Asmodeus finds a quiet time to prepare Iruma for his next critical step in his journey toward absolute demonic power… choosing an extracurricular club to join.

Kalegle may be the antagonist so far, but he’s also the most complex and interesting person in this story. He may hate Iruma, but he still has his principles. Those principles finally win over his embarrassment to put him and Iruma on the same team for the time being. In fact, the whole trust exercise may have been misguided, but it seems to have worked in a roundabout way to let Kalegle develop a little respect for Iruma. Kind of. At least for a minute or two.

So next up, Iruma has to decide what he will do with his afternoons (and probably what Asmodeus and Clara will do along with him). Seen as the equivalent of the school clubs at Japanese high schools, Asmodeus really has not understated their importance, so this is going to be a big decision. 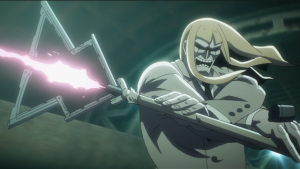 No Guns Life #10 – No surprise, Colt’s job turns out to be a crucial part of Spitzbergen’s next strike against Berühren. Berühren’s security is smarter than the average corporation’s, so they have worked out a way to turn it against Spitzbergen. It winds up a draw, with the only casualty one solitary hireling.

Colt becomes a convenient tool for everyone involved to score points: Spitzbergen, Berühren, and the author. The Extended are shown to be caught between two absolutist forces. Berühren wants everyone to join them under its control, and Spitzbergen wants to (allegedly) wipe them out. Even Inui is now a minor player in their war, able to take out the odd middleman but unable to stop the conflict.

One lingering question from the fight on the train involves Harmony again. Tetsurō winds up with burns on his face. That could just be the general result of overusing Harmony. But another possibility is that it’s what happened to the cyborg he was controlling being transferred back to him. One wonders if this is how Harmony is really supposed to work. 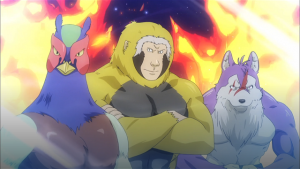 Kemono Michi: Rise Up #11 – The battle is nigh! Well, almost, but there are still a pile of details to take care of, like building the stadium, setting up the concessions, and recruiting enough combatants for the undercard.

The preliminary fights are a mixed bag. There’s a fun little nod to Japanese mythology in the team event, where the beast side matches Momotarō’s legendary companions, a pheasant, a monkey, and a dog. But then there’s the matter of Carmilla and Wolfgang.

After Carmilla trains hard and Wolfgang gets his hopes up again, both suffer crushing defeats. They seem destined to play the role of jobbers— the perpetual losers of wrestling. Not a very fun lead-in to the main event. Still, we are finally getting the main event next week, right? 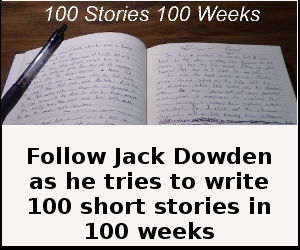 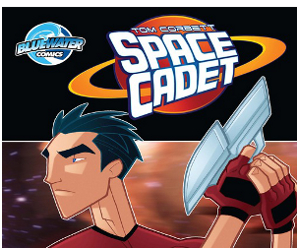