Home World Content Visit to a Dead Science Fiction Project
Our topic at the SFF Seven this week is to Share Something Great from a Dead Project.
First of all, I have very few projects that won’t ever be worked on. All of my scifi romance novels have been published and I just keep going on new projects. I don’t sit down to write a book and step away from it. I can think of maybe three short stories I wrote as an adult, which I can’t imagine going back to. There won’t be an excerpt today, however, because all three were laboriously typed on my old Royal and don’t exist anywhere electronically. So even if I wanted to dig through the storage boxes (I don’t)
I’m not going to transcribe a 500 words or so snippet at this late date. I’d probably start editing it!

My SFR occurs in the Sectors, which is the name I gave my interstellar civilization. These three stories were early early attempts at writing in the Sectors, which was useful practice but I moved on. I did keep the name and concept of one location, Taychelle’s Planet, which I like to drop into current books. It was like Antarctica and they make good vodka there.

The story that came to mind first for this week’s exercise involved a planet in the path of an invading alien armada. (I can’t remember if I named these aliens as the Mawreg, who are the Big Bad in my Sectors books but they were clearly the prototypes.)  Everyone had been evacuated but for one family from a ranch way out in the back of beyond. Three volunteers were waiting at the space port with the last ship, and would take these people to safety if they could get to the port in time. There was a baby being born, a flyer crash,  a rescue, a brave pilot and takeoff in the teeth of the incoming enemy…and a happy ending of course. The baby gets named for the pilot who saved them all. No
romance that I can recall, which is another reason I let this project lapse after finishing the first draft.
I also remember basing the space port on the USMC air station where my late husband worked at one time, as far as the setup and the atmosphere. 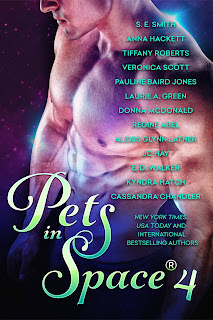 My most recent 2019 Sectors novel was STAR CRUISE: IDOL’S CURSE, which appears in the USA Today Best Selling Pets In Space® 4 anthology. A portion of the royalties earned through Veteran’s Day November 11th goes to Hero Dogs, Inc., a charity which provides service dogs to veterans in need and first responders.
Usually I start with the concept of the pet for my PISA stories and develop the plot from what the animal ‘suggests’ to me but this time my jumping off place was legends about bad luck hitting tourists who steal rocks from certain locales.
I’ve always been fascinated by these myths and the tales of bad luck people believe they incur if they ‘steal’ a rock from a certain place. (And when I was researching this topic, I discovered there are various tourist spots where this belief flourishes, not just in Hawaii. The Petrified Forest in northern Arizona is another area where people frantically return rocks to the park after thinking their illicit souvenir has brought them bad luck.) I wanted to be sure I wasn’t doing cultural appropriation if I took this basic concept for my story, so I was relieved to find the modern legend arises in various places and is believed to have been begun in one locale by a tour bus driver who didn’t want volcanic ash and grit from purloined chunks off the beach or mountain messing up his vehicles. Another variation on the story says because it’s against the law to remove anything from a national park, a ranger invented the story to add an additional layer of ‘scariness’ to deter would-be souvenir hunters.

Of  course since I’m writing science fiction, I then took the entire topic a step further and gave my ‘rock’ some scary attributes, the ability to do real harm and a bit of carving to justify referring to an idol’s curse in the title.

It seemed to me the idea of tourists and souvenirs fit in very nicely with my luxury cruise ship, and then since an entire deck of the ship is devoted to recreating a beach from the planet Tahumaroa Two, it was logical for the rock or ‘idol’ in question in my story to have come from that planet and need to go back there. This led me to ponder who in the crew would be likely to become involved with returning a rock and I decided it was time for the Cruise Director, Juli Shaeffer, to get her story. She’s been referenced many times in other STAR CRUISE stories but we really never met her.  I got to do all kinds of fun research into what exactly a cruise director does on Earth and then embellish and enhance for my starship. 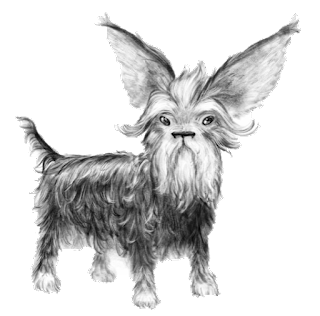 My next challenge was how to put a pet front and center in the story, and to engage them in a meaningful fashion with the action. I decided Juli and Third Officer Steve Aureli had unfinished romantic business, and that Steve has an elderly aunt traveling aboard this particular cruise. Every time I thought about the character of Aunt Dian, I saw one of the Gabor sisters in my head, dressed in pink and a froufrou feather boa, clutching a tiny dog. (The Gabors were famous actresses in their day and Eva from the ‘Green Acres’ TV show is kind of who I was going for, although ZsaZsa did play Queen of Outer space once in a movie.)

Of course Dian and Charrli, her dog, have a lot more backstory and aren’t what they seem on the surface. For one thing, they’re veterans of the Sectors Special Forces Z Corps, which means Charrli is very smart and telepathic with Dian. Charrli bonds with Juli and has an affinity for the rock or idol of the novel’s title. Then I let the events unfold from there!
The blurb: An unusual bequest….
Juli Shaeffer, the Nebula Zephyr’s cruise director, receives a mysterious bequest from the estate of a longtime passenger – a lump of rock taken from a reef on the planet Tahumaroa. Legend states anyone who steals from the ocean gods will be cursed. The passenger’s will requests the rock be returned to the beach so his heirs won’t be affected by the bad luck he believed he’d incurred. Juli doesn’t believe in superstitions and she agrees to carry out this small favor on the ship’s next stop at the planet in question.
Until the rock disappears from her office…
When the rock disappears and reappears in various locations around the ship, and seems connected to a steadily escalating series of mishaps, Juli turns to Third Officer Steve Aureli as the only one she feels she can trust. Along with Steve and his elderly Aunt Dian – a passenger aboard the Nebula Zephyr for this cruise – she investigates the strange series of malfunctions plaguing the interstellar luxury liner. Steve and Juli enlist his Aunt Dian’s dog, Charrli, a retired Sectors Z Corps canine, to help them track the missing rock as it moves about the ship.

Juli and Steve must find the rock, hang onto it and transport it to the planet’s surface, before the alien idol’s curse turns deadly. The attraction between the two of them grows as the threat to Juli becomes more and more focused. Can she carry out her task while he keeps her safe from the alien curse? Will the capricious alien idol bring them good fortune…or disaster? 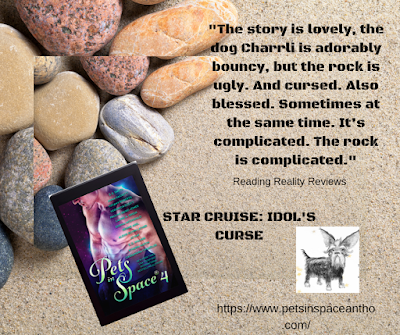 File 770 Reports on Puppies Whining Over SFWA Support for BLM

Not-so-still Life: Writing from an Inanimate Object’s Point of View