The divide between human and canine is narrowed in the novel What’s Bred in the Bone. As author Jan S. Gephardt rewrites the definition of a hero. 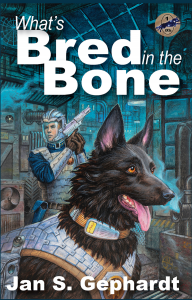 The phrase “bred in the bone” often suggests innate elements relevant to the human condition, but in the novel What’s Bred in the Bone by Jan S. Gephardt from Weird Sisters Publishing, the title gives hint to the select qualities that make a protagonist a natural hero. It doesn’t hurt that the “bone” is the symbolic prize of the canine species, and the inherent qualities of a human hero just might reflect the same goals aspired by the doggos.

What’s Bred in the Bone takes readers on a journey unlike the typical science fiction we are accustomed to. XK9 Rex Dieter-Nell is a police dog partnered with the human officer Charlie Morgan aboard a space station. Enhanced with the unique ability to communicate with their partners through brain links, these bio-engineered XK9’s become part of a valuable new investigative team. Changing the way police work is performed, the divide between human and canine is narrowed

Unfortunately, after Charlie is seriously injured, Rex is suddenly alone and uncertain of his future. But when he discovers evidence that leads to an even greater mystery, the internal conflict of morality verses one’s duty just might decide the fate of everyone.

The dialog between the animals and humans is where What’s Bred in the Bone separates itself from others in the genre. The canine perspective is painted with a definitive loyalty mixed with just enough uncertainty, the plausibility of such a technology is accepted. The clever banter and unique differing perspectives of humor doesn’t hurt either. Though the science is intricate to the plot, the journey becomes most fruitful when readers are allowed to focus on the character development and witness the odd paring.

Readers will find plenty of surprising twists and turns as the story unfolds, but this is not an overly complex tale which could turn the hard science fiction fan away. On the other hand, What’s Bred in the Bone is suitable for younger readers and opens the opportunity to become one of those bridge books that helps initiate conversations between the generations, talking about comparable underlying issues humanity faces today.

Like throwing a stick in a game of fetch, Jan S. Gephardt has penned a fun read sure to bring pet loving readers running back for more.

SpiNNaker recently reached one million cores, making it possible to perform two trillion actions per second while modeling the action of two million neurons in real-time.

Step up and see what’s going to be invading a simulcast site near you starting in July!

A Fridge to Rule Them All. Superconductive Refrigerator Could Cool Atoms to Absolute Zero Temperatures.

Doctor Who and the Strange Victorians

The Artful Collector: “Where Are They Now? Spotlight on Alan M. Clark