The Fantasy novel Lost Acre by Andrew Caldecott is a book one might attempt to read as a stand-alone, but it does beg the reader to go all-in and start the trilogy from the beginning. 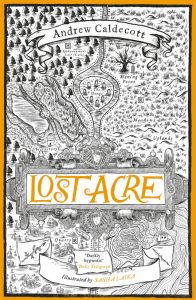 Sometimes you just need to invest in a good story, accept the commitment and go all-in, especially when you are dealing with a work already in its third stanza. The Fantasy novel Lost Acre by Andrew Caldecott is a book one might attempt to read as a stand-alone, but it does beg the reader to go all-in and start the trilogy from the beginning. No worries, because it appears that the Rotherweird series is an epic adventure with an extravagant cast of colorful characters, and well worth the journey.

Set in the world that began with the aptly titled first book Rotherweird (2017) from Jo Fletcher Books (an imprint of Quercus) and the follow-up installment Wyntertide (2018), Lost Acre closes the trilogy in a fitting manner fans of the author are sure to enjoy.

Can this book be read as a stand-alone? Absolutely. The author provides just-enough backstory to catch you up when necessary, but “just-enough” also includes a detailed list of principal characters those familiar with the plot may use as a reminder and a convenient tool for those new to the world. Lost Acre may not be for everyone as this type of narrative can become too cumbersome for some readers. But for those willing to put in the effort, they will soon discover that the crux of the book is its ever-evolving complexity.

The overall landscape of the book is saturated with a vast cast of characters. Though the antagonist Gervon Wynter is clearly painted with dark and twisted colors and the reader might even draw focus on a handful of protagonists to cheer on, there are no true “archetypical” characters here. If you’re like me, this is where the character list can come in handy. When you have an author willing to create, challenge, and even eliminate such multifaceted characters who may or may not even be essential, it is easy to become lost as you are being engrossed in the plot.

The world Caldecott has created is one that could be explored many times over in future volumes should anyone decide to do so. But this series centers around the city of Rotherweird, an embryonic architecture that at times, has more personality than those who walk its streets. Never knowing or expecting what lies around the next corner, the reader’s curiosity never rests. Caldecott obviously enjoys revealing the city’s mysteries by pealing back the layers a sliver at a time. This is perhaps where the author succeeds the most.

Sure, you can jump right into the Rothweird trilogy with this third book in the series, but it’s advisable to invest your time and well-earned coin by experiencing the entire work in its entirety. When it comes to literary Fantasy, Lost Acre by Andrew Caldecott just might be one of those rare, satisfying commitments you’ve been looking for in a book… or books.

“Game of Thrones is very compelling. But so is a train wreck.”

What it Takes to Build a Martian Colony

No. 9: Mary Shelley, Frankenstein, and Who’s The Real Monster?