Aaaah, the complexities of maintaining a secret identity

This article is sponsored by Macmillan Books. All views expressed in the article reflect those of the writer.

It’s no secret that it’s a great time to be a fan of superhero storytelling. The biggest, most expensive movies in the world are about superheroes, and we’re getting to a point in comic book adaptation culture that even some of the medium’s more obscure characters are making their way onto TV screens.

But we don’t talk enough about how the trend has spilled over into fiction. From Sarah Kuhn’s Heroine Complex series to V.E. Schwab’s Villains series to Lauren Shippen’s recent The Infinite Noise, there are increasing examples of character-driven superpowered stories in the literary world and, like all media, there are ways in which this medium in particular can explore the themes and anxieties of this narrative subgenre in ways other media cannot, chiefly (at least for this reader) delving into the psychology and interiority of superpowered characters. Marissa Meyer’s Renegades trilogy, which comes to its conclusion next month with Supernova, is one such superpowered story. 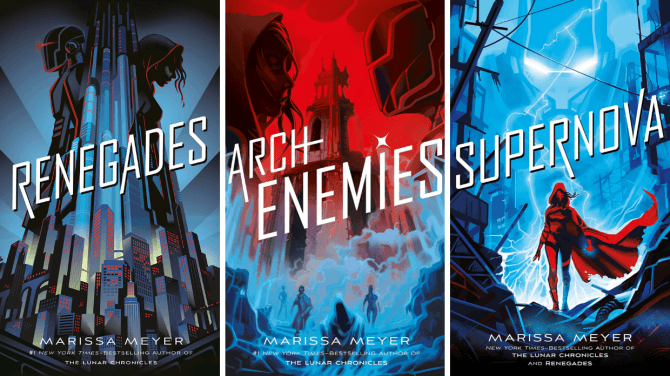 The Renegades series takes place in the fictional Gatlon City, which is ruled by a council of superpowered individuals and their squads of “prodigies,” people with extraordinary powers, known collectively as Renegades. When the first book in the series kicks off, the city is a decade past the Age of Anarchy, characterized by Ace Anarchy’s decision to overthrow the prodigy-prejudiced existing government in favor of a city (dis)order in which gangs of prodigies rule.

Protagonist Nova, who has the power to put people to sleep with her touch and who doesn’t need to sleep herself, is raised by the Anarchists after her parents and sister are murdered, and believes in the Anarchist cause wholeheartedly. The first book in the series sees her going undercover within the Renegades in an attempt to take them down from the inside. Of course, things get complicated when she begins to fall for Adrian, her Renegade colleague.

Adrian, the adopted son of two of the Renegade founders, Hugh Everhart (Captain Chromium) and Simon Westwood (the Dread Warden), Adrian is a Renegade through and through. Born with the power to bring to life anything he draws, Adrian has one of the cooler, most original superpowers in the series. By the first book, he has begun experimenting with drawing his own tatooos, which give him permanent kinds of new powers.

The complexity of secret identities in this story owes as much to the spy genre as it does the superhero narrative. Both Nova and Adrian have two superpowered alter egos. In the Renegades, they are Insomnia and Sketch, respectively. As an Anarchist, Nova is Nightmare. As a vigilante working outside of Renegade rule, Adrian is Sentinel. Who knows which superhero (or supervillain) identities keeps these two on their toes, and builds suspense as the trilogy progresses and Nova and Adrian grow closer.

read more: How Red, White, and Royal Blue Hopes For a Kinder America

Like many beliefs, there are hints of truth in both of Nova and Adrian’s world views, but the reality is much more complicated than either young adult knows. The Renegades series is the story of how their black-and-white, good-and-evil world views are complicated by their relationships with one another, and by their growing up. As with all good superhero stories, the foundational theme explores the nature of power—how it can best be used to help those who don’t, and what it looks like when power is abused.

As is to be expected, the series owes a lot to the comic book foundation of this genre, and is in conversation with what has come before. By the third book in the series. Agent N, a serum that can permanently neutralize a prodigy’s superpowers, has become a huge threat to the stability of this prodigy-ruled world. It is reminiscent of X-Men’s Mutant “cure” storyline, which played a prominent role both in Astonishing X-Men and X-Men: The Last Stand. Here, it is used as a representation of the power the Renegades have, and the ways in which weapons can be turned against even those who wield them.

The third book in the series does some tidy worldbuilding—explaining how superpowers came to be in this reality, with a truly lovely tie to some of our world’s most wondrous science—but Meyer’s strength continues to be in building intricate webs of interpersonal relationship and a focus on the interiority of characters. As this trilogy races to its emotional conclusion and the walls between Nova’s different lives stretch thinner, there is an impending sense of doom but also the possibility of healing. Will this world end in hope or tragedy? You’re gonna have to read to find out.

Supernova hits the shelves on November 5th, and is now available for pre-order. The first two books in the series, Renegades and Archenemies, are now available wherever books are sold.

Kayti Burt is a staff editor covering books, TV, movies, and fan culture at Den of Geek. Read more of her work here or follow her on Twitter @kaytiburt.

This article was originally posted on Den of Geek

RIGMOVES takes readers into the corporate world of near future asteroid mining. But can the technical viewpoint hold the reader’s attention long enough to find out how it ends.

Knight of the Silver Circle takes place somewhere along the lines of twenty hours after the events of Dragonslayer. The dragon Alpheratz is dead, yes, but that has turned out to be just the beginning, for there are more dragons left in the world after all

Excerpt: Hellmaw: Your World Is Doomed by Ed Greenwood