Kayla Matt is an emerging graphic artist who attended University of the Arts for four years and used her knowledge and determination to hone her skills. She now is an accomplished graphic novelist whose characters were first created for online roleplays with her friends. 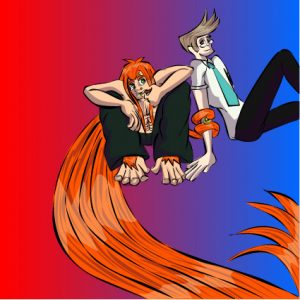 Kayla started drawing when she was 12, but she began writing at 14. There’s one character she created way back in the day that she still uses in her work now, even after about…17 years.

Kayla’s offered to give us a peek at her technique..

If I’m drawing something for someone else, there’ll be a thumbnail sketch stage, where I’ll ask the person I’m drawing it for to select whichever option(s) they feel would work best. If it’s just my own work, I’ll go through the following process:

Blocking the image in (or the Glorified Stick Figure Stage), just to make sure everything’s in place.

Fleshing stuff out, making sure the figures and backgrounds are fully sketched.

If working traditionally, she’ll bring out the Sharpies and start inking. Most of her work is digital, and ends up being scanned, opened in Illustrator, and then the inks, colors, shading, and highlights are all handled with the Pen Tool.

I started working that way back in college, because the tablet I had at the time was missing its pen, and I was in the middle of an assignment that was already being handled digitally. So the main option I had was to start getting used to what was (at the time) my least-favorite feature in Adobe, or completely change my approach.I think my favorite part of the creative process is when you can shut out everything else around you and stop agonizing about if it’ll look right. When I can just lose myself in the actual process of creation…that’s the best. 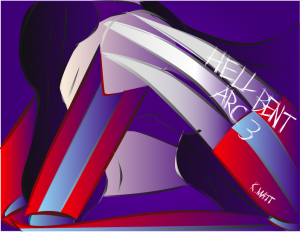 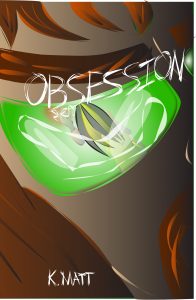 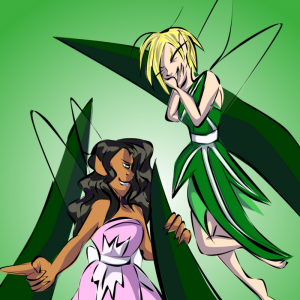 Her own graphic novels are colorful and engaging works of art.   The books in the Hell Bent series are a combination of prose and graphic novels, and tend to be a mixture of (somewhat soft) science fiction, urban fantasy, and horror. It is something of a pet project for her, a pet that she feeds with time, and that feeds on her sleep. 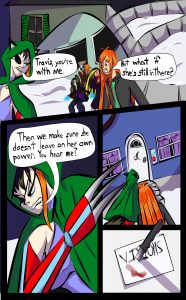 Ivy’s one of the first characters I created. I can’t remember the exact context, but the one thing that’s been the most consistent with her is her alcohol requirement. She literally needs it to survive. Over time, that’s developed into her having a particularly odd blood composition. Beast is another one I’ve had for quite a while, since before I left high school. She started off as entirely human, before a series of events caused her to gain feline traits and cybernetic limbs. Travis, my half-monkey guy with long red hair, was first conceived in college, when I probably should have been paying attention to a history class. He also began as fully-human, but experimentation in a roleplay led to him being given monkey traits. Since I tend to like monkeys, that’s become a consistent part of him. Spencer (skinny dude with glasses) also came about sometime in college, and he’s one of the few in the main family that isn’t a genetic experiment. Jesse (the blonde with the knife) was created specifically for my books, and may be one of the more twisted characters I’ve ever written. She’s a serial killer who doesn’t like to limit what she does. So for the storyline, it follows a family of genetic experiments, magic users, and cyborgs (with the occasional human) living in the city of Hell Bent, PA (Lab Capital of the US). It starts with Dr. Spencer Abbot hoping to find an anniversary gift for his wife, with his best friend/brother-in-law Travis. They encounter a woman that claims she can help…only for her to be more of a threat than anticipated. They manage to get away with their lives, but Spencer’s decision to trust her haunts them for a while, leading to such things as: her stalking their family and threatening their peaceful existence, Spencer learning magic to defend himself, Beast having to retire from her career as an assassin, and all sorts of chaos.

Aside from her own work, Kayla’s illustrates The Tales of Twinkle Dingle – a quirky series of stand-alone books set in a very strange fairyland.

Kayla’s books can be found at
Amazon
FaceBook
Blog 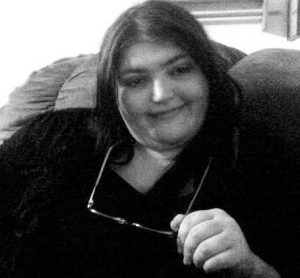 K. Matt is a graduate of Philadelphia, PA’s University of the Arts.

Her interests in sci-fi, fantasy, horror, comics, and anime have inspired her to both write and illustrate her own work.