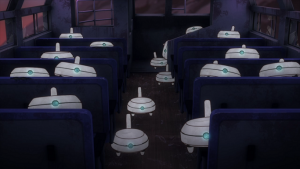 kemurikusa. #8 – Before mounting an attack on the red tree, our heroes have to find the trunk, a monumental task in and of itself. When their way is blocked, they find that another of Wakaba’s useful powers is to bring them more allies than they realized they had.

The little white mechs have an almost canine sense of loyalty once they decide they like Wakaba. And the parallels go further than that and the wagging antennas. The nickname being translated as “white one” (yay for translating the colors more) also pops up a lot as a name for dogs. So, after no permanent deaths since the first episode, kemurikusa. has just killed off a literal boatload of cute doggos. Good work making the apocalypse gloomy again, there.

Wakaba’s further reading in the journal suggests that the sisters were literally born from splitting the body of the First Person. This explains their extremely uneven distribution of senses. Rin, the strongest, is the body, the core. Ritsu, with excellent hearing, is the ears. The Rinas are the mouth, Riku is the skin, so what might Ryo and Ryoku be? The nose hasn’t been mentioned yet, and since Ryoku is the only other one who is literate, they might be the brain and/or eyes.

This also means that this column has managed to pick two shows about scattered body parts to follow this season. 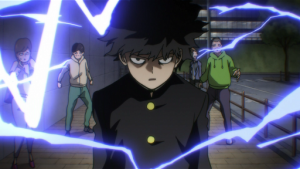 Mob Psycho 100 II #9 – Dimple tries to assure Shigeo that those aren’t really the singed corpses of his family, and merely calms him down enough to focus on beating up the nearest suspicious psychics he can find. It takes a whole team of allies to get Shigeo to the secret hideout and settle him down. After which Reigen and Dimple compare notes, and realize that they’re both completely making stuff up and Shigeo may be even more upset when he finds out, but what the heck, everyone gets to survive at least a few more hours this way.

Meanwhile, Claw kicks off its attempt to take over the world despite there being at least two plots in progress to take out the leadership. Behind one of them is Shō, who, as we all suspected, faked the Kageyama family’s deaths to set off Shigeo. If Shō doesn’t realize just what kind of godlike fire he’s playing with, well, he will shortly.

Which is not to say that it isn’t all very entertaining. I look forward to seeing what kind of knots this whole army of superpowered idiots will be tying itself into next week. 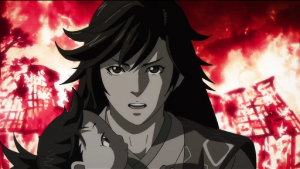 Dororo #9 – Dororo falls ill with Generic TV Disease, leaving an opening to insert his tragic backstory while a kindly Buddhist nun nurses him back to health. Mainly it serves to demonstrate that the Sengoku Period really sucked for just about everyone involved, though I’m guessing this Itachi fellow will be turning up again.

But the real point of this episode is the revelation of what Dororo is hiding under his clothes. I can’t write up a proper reaction to it, because some people were very eager to spoil this particular twist as soon as the show started airing. On the other hand, because they went into detail about exactly how the manga handled it, one can say for certain that Dororo identifies as a boy, so we’ll stick with masculine pronouns for him. 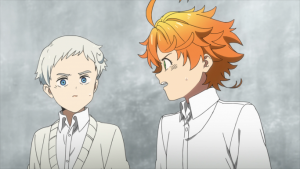 The Promised Neverland #8 – Isabella decides the time has come to break up the escape plot, and does so decisively. In the space of a few hours, she gets rid of Krone, arranges for Norman to be shipped out, breaks ties with Ray, hobbles Emma, and even has a little speech prepared about how she’s totally doing the right thing.

Krone, on the other hand, despite her general insanity and her relentless focus on taking over Isabella’s position, seems to have nurtured a tiny flame of rebellion. Though she worked her way up through the ranks of Mother candidates, she had something she wasn’t supposed to have, heard something she wasn’t supposed to have heard, and has now passed those things on to Ray as a final “screw you” to the farm system.

This doesn’t make her not a horrible physical caricature, and it’s a depressingly familiar arc to have the black character die nobly to save the others. I’m interested in seeing what her secret was, but she still warrants a big warning to anyone planning to start this show. 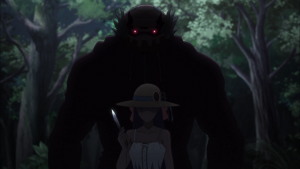 Magical Girl Spec-Ops Asuka #8 – After weeks of desperately trying to hold the clichés in, Magical Girl Spec-Ops Asuka finally explodes, splattering a rainbow of R-rated movie tropes everywhere. Child soldiers. Somalia. Vital yet super-secret multinational trade summit. Deranged lesbians. Girls threatened with rape. A person presented as a helpless cripple after losing half a limb. And, of course, a new round of needlessly complicated torture.

As odd as it may sound given the number of different ways the author has thought of to get characters writhing in pain, I don’t think we really know what the story’s overall opinion of torture is. I mean, it’s obviously a go-to strategy for pumping up the darkness level, but it hasn’t really provided a verdict on whether it thinks it’s a good thing for the good guys to be embracing torture just as eagerly as the bad guys. I think we will get that when (if) Asuka finds out what Kurumi’s been up to on her behalf. Will she just nod and say that’s part of war, or will she feel let down?

Chisato’s backstory brings us two new major pieces of information about the Babel Brigade. One is that they recruit people at moments of maximum suffering. It could be that they reached Francine when she was attacked while she was alone, and she had turned by the time Asuka reached her. (Note that her eyes have changed color by then.) The other is that the Brigade contains serious Fullmetal Alchemist fanboys. The concept of a boy’s soul living in a big spiky suit of armor is too specific to be anything but a deliberate homage.