In this week’s viewing: With nothing falling apart at episode 2, painful decisions are made to set our lineup for the rest of the season. 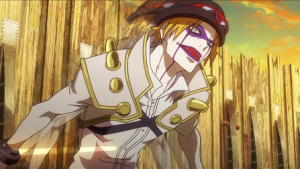 Double Decker! Doug & Kirill #2-5 – Since arriving at his new job, the newly minted Detective Constable Vrubel has gotten to know his colleagues and his enemies. He’s learned that the scourge of Anthem has permeated every corner of Lisvalletta and turned the most unexpected people into its agents. And viewers have learned that there’s a lot wrong in his world.

It just seemed like the show being quirky back when Doug said he became a detective to erase class and poverty. But we’ve since seen how desperately poor Kirill was growing up, and the state of the factory workers, and the master criminal who considers wasting food one of the most unforgiveable things a person can do. There are other problems lurking in the background, too; the stories in the newspaper Kirill reads during his stakeout suggest an ecological collapse in progress. And if that isn’t big enough, the presence of Apollon Media and the general technological level suggest it’s in the same world and time period as Tiger & Bunny— except the setting of T&B had only one sun.

So while we may be looking at a slick buddy cop comedy-drama for now, it shows every sign of aiming to expand into something much grander. Either way, it’s the class of the field this season in everything from writing to animation. 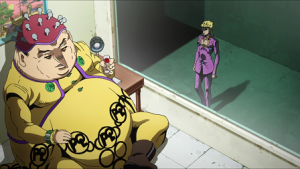 JoJo’s Bizarre Adventure: Golden Wind #2-3 – Giorno has to figure out how to use his rather unaggressive powers for combat as quickly as he can, only just barely pulling out a win against Bruno. And then, in the finest shōnen tradition, he converts his first opponent to an ally by laying out his reasons for wanting to join the world of organized crime. This gets him a job interview with the local mob, and a simple test, which, also in the finest shōnen tradition, escalates without warning into a matter of life and death.

This arc is earning the “Bizarre” in the title more quickly than any before it, but it’s not doing it recklessly. Every aspect of the powers presented has been carefully thought out. The author has really hit his stride here in constructing fantastic challenges for his latest hero. There is still next to no knowledge of the rest of the story needed.

This is one of the finest fighting stories ever to make it to animated television, and it would be a huge shame to not keep following it. 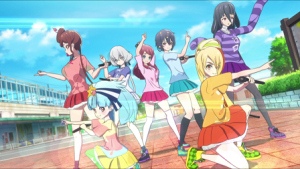 Zombie Land Saga #2-3 – Now that all but one of the zombies has regained conscious thought, nothing is any easier. Tensions break into the open in the form of an epic rap battle, and then the two experienced idols try to sit the next concert out. But then something magical nearly happens, and everyone manages to pull in the same direction for a minute…

If there’s one worry I have about this show, it’s that it may forget to keep lampooning the idol world and go too far toward, um, idolizing it. An occasional moment of seriousness is okay, but it’s at its very best when it’s zombies vs. police vs. thugs in a spontaneous rap contest. More of that sort of thing, and this will be wonderful. 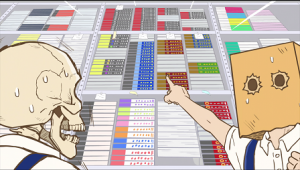 Skull-face Bookseller Honda-san #2 – It’s time for a lesson about restocking and the different problems it presents for each section, from getting the timing of magazines right to wrangling the American comics which, like everything else in Cartoon America, weigh far too much. Then we get a segment about the manga this show is based on, confirming what we’ve all started suspecting by then: these are the true-life adventures of an ex-bookstore employee, who has just taken an unusual approach to anonymizing his old co-workers.

This means it is not, technically speaking, sf. It’s still certainly of interest to anyone who wants to know more about the international modern book trade, including many sf fans, but being not sf disqualifies it from weekly commentary in this column. Petty, I know, but there are so many good shows this season that I need the petty reasons if I’m going to cut this list down to size.

SSSS.Gridman #2-3 – Sure enough, Yūta is trapped in a reality under someone else’s control. That someone is his classmate Akane and/or her mysterious friend Alexis, who appear to have created it as a trap for Gridman. With Yūta to help him manifest and his powerups gathering, though, they aren’t taking him down without a fight. Or, actually, a whole series of weekly fights, since this is based on a live-action fighting show.

Rumor had it that there was going to be a big shocking change to the show around now, but it obviously hasn’t gotten there yet. I’m guessing it will be Yūta breaking out of this created reality, but there’s always the chance that the whole Gridman thing is a fakeout and the rest of the show will be about something else. (In support of that, see the massive accumulation of Transformers references in the character designs.)

Judged just as a straight fighting show, this is a well-animated one with a couple of interesting twists. As a serious one, it’ll make a nice counterpoint to the antics of Double Decker and JoJo, so let’s see where this goes. 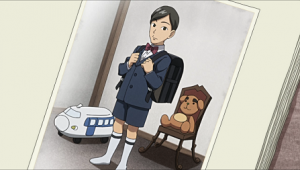 Karakuri Circus #2 – After fighting off another giant puppet, our heroes get some time to catch their breath. Narumi and Shirogane each spend some quality time with Masaru, amping up their unspoken battle over who can parent him better. But then Masaru is snatched away, and the only way they can get a lead on his whereabouts is to collaborate with one of the people who want to kill them.

Karakuri Circus is moving fast, no surprise when it reportedly needs to adapt a bit more than one manga volume per episode, but it doesn’t feel like it’s leaving anything important out. Narumi and Masaru’s talk about their childhoods, especially, feels like it is given every unhurried moment it needs.

This is a solid show with action, humor, heart, and my favorite opening theme of the season. The only thing wrong with it is that it’s debuting alongside two other semi-humorous action shows with heart, Double Decker and JoJo, which are not just good but great. 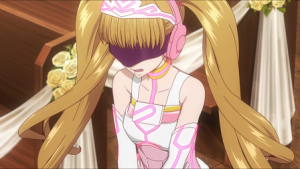 The Girl in Twilight #2-4 – A mysterious figure starts feeding Asuka and her friends hints to find other timelines, where they start bumping into other versions of themselves trying to live their lives under various trying circumstances. But those timelines are being attacked, too, and the warrior Asuka can’t stop all the attackers on her own.

Sony may be here to sell merchandise, but the script is doing a fabulous job of minimizing that and finding unusual angles to play from. While the two alternate timelines we’ve seen so far compare badly with ours, they aren’t so dystopian that the girls who temporarily take their doubles’ places don’t feel some attraction to staying in them. The two parents we’ve met so far aren’t evil or clueless in the way most parents in teen-centered sf are. And it is against all anime precedent that the first girl in the core group to develop her own powerup isn’t the most central character.

This may not be the best-animated show this season, but it’s easily one of the most interesting, and I think it will be rewarding to see where it goes. 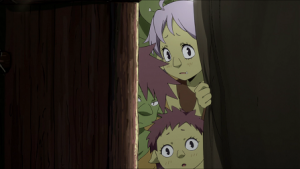 That Time I Got Reincarnated as a Slime #2 – Rimuru Tempest, as we now know him, tucks his new dragon friend away in his self of holding, escapes his captivity, and almost immediately is accosted by some goblins with a problem. Removing the dragon means that weaker but more unpleasant creatures are starting to move in, and since Rimuru is obviously powerful and not attempting to kill the goblins on sight, could he help out?

Leaving the cave means an end to the more creative visuals, though the animation of the human and humanoid characters still includes superb attention to detail. Unfortunately, the story also still faces the usual problems of light novels, like way too much talking and no real obstacles for the protagonist. While Rimuru is the most likeable light-novel hero I’ve seen some time, it just doesn’t add up to a strong enough argument in this particular season. 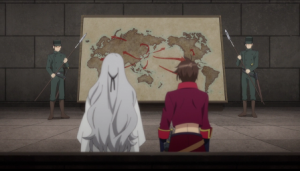 Bakumatsu #2 – Various forces battle their way into the fantastical “castle”, where the villain of the piece is holding both the emperor and the last of the Tokugawa shoguns captive. While the shogun is sprung by his agents, Shinsaku is treated to an explanation of the evil master plan. Having accelerated the development of steampunk, the new boss will now make use of that technology to kick off World War II approximately 70 years early, and conquer the world!

So this is how Bakumatsu plans to make sympathetic characters of both the imperial loyalists and the glorious lost cause of the shogunate: give them an enemy they have to join forces to fight. (An enemy who, incidentally, since he’s got all the technology and the ultimate powerup, is basically a light-novel power fantasy hero. Now there’s a story idea I’d love to see.)

It looks like an interesting way to get a whole bunch of historical figures smacking each other around, but once again, we are so spoiled for decent action shows that Bakumatsu isn’t going to make the cut.

Everything on this list was good enough that I could have continued watching it in a season not so oversupplied with good shows. But, since I need to get things down to a maximum of five, they’ll be Double Decker, JoJo, Zombie Land Saga, SSSS.Gridman, and The Girl in Twilight. There’s one more premiere coming next week, assuming it gets a streaming deal, but it’s going to have to be pretty incredibly awesome to knock any of those out of the lineup.

A reprise of our interview with the champion of art and authors – Ursula K. Le Guin

A winter blast of new anime series is coming your way in January!

A newly discovered planet, Wolf 503b, is twice the size of Earth

Review: Another War by Simon Morden