Home Opinion/Editorial Where We Come From, Where We Are Going

One of the things that pleased me the most about Amazing Stories’ debut at WorldCon76 was the apparent recognition of and acceptance of what we are trying to do, mostly by older Fans*.

They’ve been around the block, have lived large portions of the history of this genre and attendant social phenomena.  Many have actual exposure to both formal and informal histories, anywhere from participating in Fan History projects to listening to a fourth-hand game-of-telephone recounting of some historical happening during a panel discussion and so it is not much of a surprise that these people picked up on various clues displayed at our booth.

What someone visiting our booth saw (beyond a handful of peripatetic “newsboys” eagerly giving away copies) was a display of anthologies and facsimile magazine editions, featuring old-school pulp art covers accompanied by dates, none more recent than 1961, sitting next to and promoted with a magazine dated in 2018 and featuring some of the most currently recognizable names in the field. 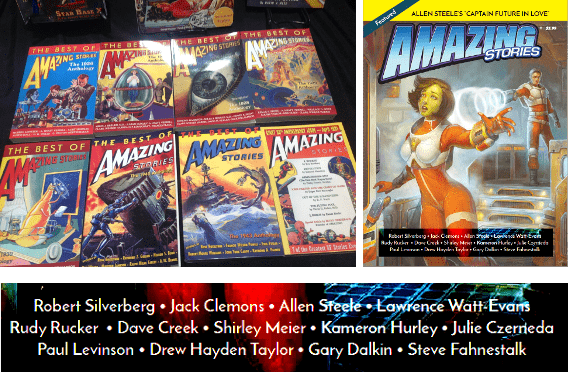 They saw a large banner featuring a magazine cover that, for the initiated, was an obvious riff on the very first cover illustration ever produced for Amazing Stories. 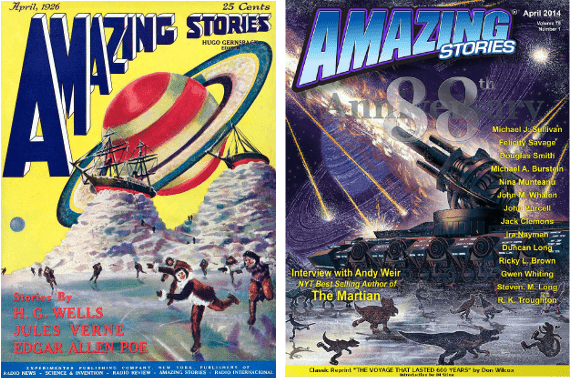 If they delayed their gratification of paging through the issue long enough to have a chat, they’d have heard words like “tradition” and “pulp” and “history”, phrases like “shoulders of giants” and “bridging the gap”;  if they grabbed and ran, later, they might have noticed that the name of the publishing company behind all of this had a familiar name – The Experimenter Publishing Company.

They would have also noticed that the layout, the format, the presence of title art, carries a modern design sensibility, while also harkening back to an earlier era.  All of these things would have signalled to someone able to recognize the clues, that this operation not only recognizes its roots, but is seeking to plant one foot in the past and another in the future.

For those not so familiar with the history of our genre (“I thought the magazine was based on the TV show…”), these visual clues were probably not so obvious.  Here then, is a straightforward explanation:

Further, there is value in that history, the value of lessons learned, not only from experiences of the past, but also from re-examinations of that past.

There is also the comfort and familiarity of having a shared background, of commonalities that can serve as ice breakers, the fun that can be had from reinterpretation.

There is also the need to recognize that each generation’s own experiences, while flowing out of and influenced by preceding generations, is unique, and different, and may require a different sensibility and approach.

While it is true that each generation of Fandom has its touchstones (mine were Fireball XL5, Star Trek and Lost in Space;  for others it may have been He Man and the Masters of the Universe, along with that TV show bearing a familiar name), ALL of us have had a moment when we realized that this genre was something special to us, and ALL of us have had that moment when we found other people we could share that something special with.

For these reasons, we have chosen to try and represent both the roots of our genre and community, and its future.  Our anthologies and facsimile editions mine the past and make it accessible, our magazine publishes contemporary works and our website engages in both.

*Seeing as how ALL attendees at WorldCon are Members of WorldCon, be they Committee, panelists, Guests of Honor, volunteers, moonlighting astronauts, dealers, award winners and award losers, or those people who always show up and never seem to leave the lobby, the word “Fan” has been and is now meant to be all-inclusive