On my last trip to London and MCM Expo, I was remembering my first con I attended many years ago back in North Carolina. It was a true con, as it was mainly dedicated to comics and graphic novels. This further sparked my contemplations about the genre, and too my surprise, my partner had picked up some graphic novels when we went to Forbidden Planet in London. (Side note here – if you’re ever in London you have to go to Forbidden Planet; it’s nerd nirvana!)

Long story short, I ended up with the graphic novels and I decided to get back to my roots of loving the comics I grew up reading, and share my thoughts on some of the newer ones out there. 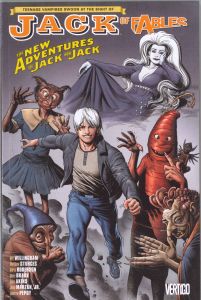 My first review is for Jack of Fables: The new Adventures of Jack and Jack. First thing to catch my eye was the intriguing cover art. Add to that, at the very top of the cover it says “Teenage Vampires Swoon at the Sight of” alluding to Jack (or Jack) – one or both of them. As most probably are aware of, I’m fond of vampires. I’ve published five vampire novels of my on.

Upon reading the stories, it was even more delightful than I thought it would be. Mind you, it has been quite some time since I had really delved into a comic/graphic novel. I was surprised at some of the offerings in this particular one.

Up front, they explain the two Jacks, explaining that Jack is also known as Little Jack Horner, Jack B. Nimble, Jack the Giant Killer and a list of other aliases. He is the hero of the story, and as they put it, the lovable rogue without the lovability. The other Jack is Jack Frost, the son of Jack Horner and Lumi, the Snow Queen. He is looking for his lot in life.

I won’t give away the plot in case others want to read this for themselves; I do hope that many of you will – it’s a great read! The story is broken into parts. Jack ‘n’ Apes is the first tale where Jack ends up tied to a pole in a hut, naked, conversing with an ape who apparently has the gift of speech. If that’s not enough to spark your interest, the other tales include Jack as a fat father figure to Frost, and for some reason Babe, the Blue Ox is following him around. There are dragons, miscreants, and all sorts of the kind of characters that show up as father and son find their way.

The art is superb. The story fast-paced and well-written.

I’m off to London in a couple of weeks. There aren’t any cons going on while I’m there, but I will be visiting some comic shops, and I’m meeting with a group of London Comic Enthusiasts while I’m there. I hope to bring back more interesting and exciting comics/graphic novels to review for you. Cheers!