Welcome to Autumn! New releases in science fiction romance are arriving daily and I’ve got a fresh report for you, starting with – you guessed it – more cyborgs. 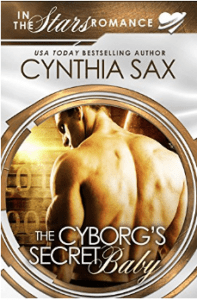 Welcome to Autumn! New releases in science fiction romance are arriving daily and I’ve got a fresh report for you, starting with – you guessed it – more cyborgs. Before I get to the specifics, however, first a little note that every week of every month there are large numbers of new SFR titles released by publishers and independently published authors so in these posts I try to bring you a bit of a sampler. But there’s a whole huge galaxy of SFR out there to read once you’ve gotten started. Now, on to the books for this installment!

USA Today Best Selling author Cynthia Sax has released The Cyborg’s Secret Baby (In the Stars) but don’t let the Harlequinesque title and cover fool you – this is another entry in her Sizzling Cyborg series, in a world that she herself calls a “dark, gritty, often-violent universe”.

The plot: A fierce cyborg warrior and his curvy human female share a no-longer-so-little secret.

Stealth, a K Model cyborg, knows his passion for Zebrina, the commander’s human daughter, is forbidden, yet he can’t resist the curvy female. He craves her touch, cherishes her sounds of pleasure, would do anything to keep her safe.

When he’s faced with the choice of protecting his fragile human or living to see the next sunrise, he chooses her, always her, sending Zebrina halfway across the universe to safety. He doesn’t realize their stolen moments had consequences neither of them believed possible.

After hearing her warrior died in battle, Zebrina focuses on the last gift he gave her. Doing what is right for their child is her sole priority. She will put their son’s happiness first, even if that means choosing another male over the love of her life. 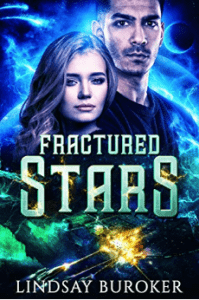 Lindsay Buroker (author of the acclaimed Fallen Empire series) has released Fractured Stars, incorporating some unusual plot elements. The blurb: McCall Richter finds criminals, con men, and deadbeats better than anyone else in the empire.

She’s proud of her success and that she owns her own spaceship, especially since she struggles to understand human motivations, can’t tell when people are lying to her, and is horrible at recognizing faces. Being autistic in the empire is frowned upon—and there’s a handy normalization surgery to correct it—but she’s managed to prove her worth and avoid irking the tyrannical regime.

Except for one thing.

Two years ago, she liberated the android, Scipio, from an imperial research facility where he was treated worse than a slave. He’s become her business partner and best friend, but if the empire finds out she has him, a “normalization” surgery will be the least of her worries.

When her ship is confiscated by a cyborg law enforcer needing to transport prisoners, McCall knows she and Scipio are in trouble. Worse, the enforcer’s pilot is a former bounty hunter and business competitor she beat to the prize many times in the past.

Soon, he’s snooping all over her ship and questioning her about her past.

And there’s something strange about him. He knows far more about what she’s thinking than any human should.

It’ll only be a matter of time before he discovers her secret. And then what? 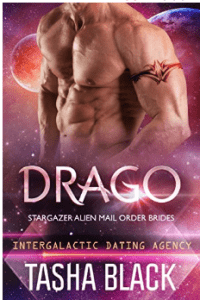 New from USA Today Best Selling author Tasha Black is Drago: Stargazer Alien Mail Order Brides #13 (Intergalactic Dating Agency). Tasha releases the novels in this series in connected trilogies, and Drago is the first in this new set. As she says, “Educated about humankind by the 1980s movies that came to them in an interstellar time capsule, these gorgeous gentlemen are eager to meet Earth girls…” The action occurs primarily on an Earthly farm, which is a novel location for science fiction romance involving aliens. The story: He’s her lab subject. She’s the subject of his forbidden fantasies…

When Arden Green was hired as a lab tech, she didn’t expect her duties would include delivering titillating movies to hunky aliens and retrieving their specimens. But when she finds herself in Stargazer, Pennsylvania doing just that, she figures things can’t get any worse. Until she starts to fall for one of the men she’s supposed to be studying…

Drago has made the extraordinary journey to Earth from faraway planet Aerie. But his life as a lab subject is simple. He eats, he reads, and he dutifully tries to click permanently into his human form. Most of all, he lives for his momentary daily contact with lab tech Arden Green, the woman he recognizes as his mate the first time he sees her.

But the delicate balance at the lab won’t last forever. When circumstances force Drago and two of his brothers to flee, Arden must help them escape. But can she keep her relationship with her subject professional? Or has science blinded her to true love? 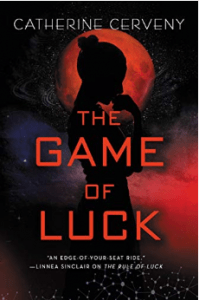 Catherine Cerveny released The Game of Luck, the third in her Felicia Sevigny series, which features some interesting new angles on Cerveny’s plot twists involving the DNA-based nature of luck itself in her world. I’m also always intrigued by stories involving tarot cards. The blurb: The perfect society One Gov engineered from Earth’s ashes is beginning to crumble. As social unrest and dissatisfaction spread throughout the tri-system, One Gov struggles to maintain order, and a single misstep could see civilization spiraling into chaos.

During this dark time, Felicia Sevigny is eager to use her card-reading ability and new position with One Gov to help restore peace. But she soon learns that the game of politics is a dangerous one, and being married to Alexei Petriv, head of the Tsarist Consortium and One Gov’s biggest rival, is not necessarily a hand in her favor.

When members of her family begin to disappear, the stakes skyrocket. There are those who would stop at nothing for the chance to exploit Felicia’s luck gene to seize power all over the tri-system. And as the threat of revolution seems imminent, it may be that this time, nothing will be enough to keep Felicia and everyone she loves safe-not even luck. 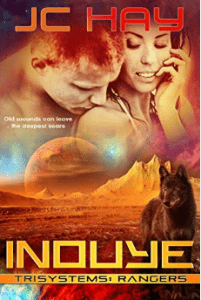 JC Hay, well known in SFR circles for his Corporate Services series, featuring dark cyberpunk tales, has moved into outer space with his plotting and begun a new series with Inouye (TriSystems Rangers Book 1). The second book in the series, Grenville, has also recently been released. The plot for Inouye: Old wounds can leave the deepest scars.

Lance Corporal Ren Inouye has spent a decade forgetting his homeworld and the girl who cut out his school-age heart. With the help of his umbra wolf partner, he’s almost succeeded. When he’s ordered back home, the last thing he wants is for her to drop back into his life and tear open those scars he thought long-healed.

Lucia has spent five years doing refugee work, trying to make up for her family’s name and her own spoiled childhood. When her aid shuttle gets shot down, she’s forced to rely on the one person she thought she’d never see again.

Thrown together, it’s impossible to ignore that their old passions still run hot. If they want a future, they’ll need to put the past on hold and work together, because someone’s trying to heat up a cold war on their homeworld, and the fastest way to do that is to make sure they’re both dead. 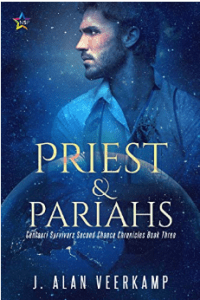 Priest & Pariahs (Second Chance Chronicles Book 3) is an intriguing new book from J. Alan Veerkamp. In some ways  I feel impelled to read the book just to find out the backstory for the spaceship’s unique name (kidding!).  Sounds like good classic space adventure. The story: Costa McQuillen has escaped from Earth, where being para-human—a Pariah—with tech empathic abilities is illegal, and marks him for extermination. Arrogant and standoffish, Costa is unable to trust anyone but is willing to risk everyone’s safety in his desperate effort to reach the planet Omoikane. His best solution, gaining passage on board the Santa Claus.

Arbor Kittering is the crew’s newest coding tech. Having spent a short time in prison for data hacking and falsifying government files, the Santa Claus is his last chance at a new start—if he can decipher the strange malfunctions plaguing the ship.

Eugene “Priest” Jones, the Santa Claus’s Head Pilot, is a bit of a scoundrel. Perpetually single, Priest is attracted to Costa and Arbor. In truth, he’d like to have both, but it’s clear even his grifting and gambling skills can’t make that happen.

Now as they all travel together, it appears Priest needs to make a choice before it’s too late as each of their lives intertwine with potentially dangerous and deadly consequences. 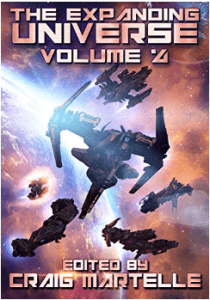 I’ll conclude with The Expanding Universe Volume 4 edited by author Craig Martelle, which is not science fiction romance but a science fiction anthology. (Maybe a little romance sneaks into a few of the stories!) I always enjoy reading short stories and sampling new-to-me authors so I thought maybe you would too. The blurb: Twenty remarkable stories. Twenty award winning and bestselling authors. One incredible science fiction collection to awaken your mind to infinite possibilities. Aliens, snipers, warships, royalty, intrigue. Battles fought with railguns, plasma beams, and blasters–with words–or even only within the mind.

The universe is expanding, and these are its fantastic stories, beyond our understanding, beyond time and space itself. What we do know should terrify us–and what we don’t know can kill us. Yet human courage will take us beyond our limits—far beyond in deep space. Maybe even closer to home where the boundaries exist only in our minds.

I’ll be back in October with more titles for you! Happy Autumnal reading!

In this week’s viewing: The last few winter premieres, and too many good shows to keep on keeping up with.