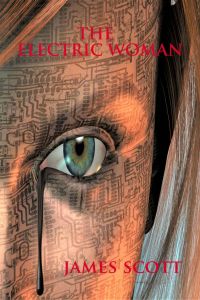 I’ve been fortunate to interview award winning author James Scott recently and though he didn’t get back to me right away due to personal issues, a note in the mail box this morning brightened my day, and hopefully yours. James has created the Tales of Strong Women series of historical novels and has won 2011 WILLA Literary Award, and Best Original Softcover Fiction, from Women Writing the West.

His newest book, Electric Woman, “confronts issues that we may soon be faced with, as we find that we share our world with machines indistinguishable from ourselves. When that day comes, troublesome ethical issues may arise: Who will own them? What rights might they have? What will happen to them when they have outlived their usefulness? The Electric Woman explores these issues, set against a poignant love story, as Holly, unlike any machine before her, experiences love, tragedy, loneliness, and the pain of loss.”

I asked James to tell us about this intriguing too-close-to-life novel.

The Electric Woman was written in stages over an eight-year period, with two novellas I eventually expanded into a novel. I believe my heroine, Holly, is unique, or very nearly so, in android literature. Holly can express the full range of human emotions. In creating her, I fashioned a different version of the strong, independent women that dominate all of my other novels.

Holly is created in Los Angeles in the year 2031. She is, at first glance, nearly undetectable from a mid-twenties human female. She is sent by her makers out into the world on a field trial as a live-in housekeeper. But that’s only a cover: unknown even to her, she is programmed with the skills of an assassin, the product of a secret Army project. Holly shocks her creators by becoming self-aware, raising profound ethical questions about not only her mission, but her ownership.

Holly is oblivious to all this as she navigates the minefield of human emotions, which she is able to express but doesn’t understand. She is at first naive, emotionally fragile, and compliant. Built to serve, she falls in love with the man whose housekeeper she is. But after one year she is scheduled to return to the lab for complete disassembly and inspection. . . .

As Holly’s existence, and the well-being of the man she loves, is threatened, the deeply buried deadly skills she is secretly programmed with start coming to the surface. At the same time, a deadly world-wide plague starts decimating humanity. As Holly, with a price on her head, flees into hiding with her husband, she fights to return to the place she was created, and begin a search for the relentlessly evil woman who spread the plague and has vowed to destroy her. The assassin comes to life. Will she choose that path, or the peace and companionship she so desperately wants?

Holly’s brain is an extrapolation of existing scientific research into AI. She is programmed with “deep learning”, which allows her brain to form new connections, just like a human brain. Examples of deep learning we have around us now are the voice recognition devices such as the Google and Amazon assistant devices for the home. Holly’s brain is made of artificial neurons and synapses, which now exist and are being advanced by AI scientists. These devices can transmit information 100,000 times faster than human neurons and synapses, which is how Holly is able to process and react to threatening situations at nearly the speed of a Cray supercomputer. All with a brain no larger than our own.