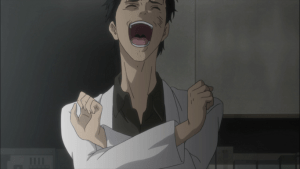 Steins;Gate 0 #21 – Three thousand jumps times a few hours to explain what’s going on each time and get set for the next one, by my back-of-the-envelope calculations, makes over twenty months of subjective time spent travelling back to 2011. And that’s without a chance to stop and sleep. No wonder Okabe is a bit insane by the end of it.

That’s the long-awaited re-emergence of his mad scientist persona, Kyōma Hōōin. Loopy and arrogant, but also a sign that Okabe is feeling himself again. And why shouldn’t he, having succeeded on his mission, making it all the way back with the solution to finally get Mayuri and Suzuha away safely?

And after that whole odyssey, he still fails. The fact that it is known when the time machine leaves, whenever that turns out to be, means that Leskinen can always warn his own past self and arrange for the helicopter to show up at the right moment.

There is a wall at July 7, 2011 that cannot be crossed, not by the time machine nor by the time-leap machine. Okabe simply can’t go back any further. So the next step is to look at why, and how to get around that reason. 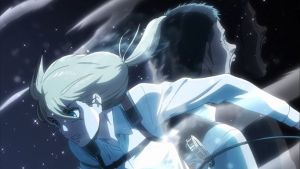 Attack on Titan #46 – So the reason Erwin’s so sure of where Reiss is headed is that abberant Titans home in on large concentrations of people, which also means it’s pointless shifting those large concentrations of people around, because the Titan will just head to their new location, and Erwin’s bright idea for avoiding a catastrophe is that maybe they can blow it up at the last possible moment. Well, as they acknowledge here, the Scouts are used to dealing with desperate odds like this.

Eren’s reminiscence is a reminder that not only is a new generation of kids getting the opportunity to be traumatized, we haven’t seen an outbreak of gory body horror in a while. The confrontation at the wall certainly delivers on that.

Although the Titan is stopped outside the wall, it is known that blowing up a large fleshy object tends to distribute it across a substantial area, so Orvud does still have to contend with flaming chunks of Titan blubber raining down on it. One of those chunks contains Rod Reiss— and Historia gets her chance to stand up to him, for the first and last time. Now she’s ready to take on the role she was meant for as the true Queen of the Walls.

Historia has come a long way, and it’s a great moment to see how much she’s changed. 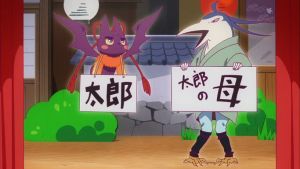 We Rent Tsukumogami #9 – It’s time for the story of Satarō and Suō to step into the foreground as a new clue leads Seiji to another person who very much wants to find out what happens. Gompei has feelings for Satarō’s ex-fiancée, and all this time has assumed that Satarō stole Suō to help out his true love.

All the digging by Seiji, Gompei, and the tsukumogami helps to eliminate some suspects. The servants know that Suō was there shortly before the fiancée arrived. But he was gone while Satarō was meeting her in the garden. Satarō reportedly protested that he did nothing, so if he’s telling the truth, who does that leave? Satarō’s mother, who, according to Goi’s little reenactment, was using the disappearance to hurry Satarō into marriage.

That still leaves the question of where Satarō himself has vanished to. His household is scandalized by even mentioning him. We haven’t actually seen Matagoro, so it still remains possible that he and Satarō are the same person. I’m not sure how he would have convinced his mother to agree to that move, though. 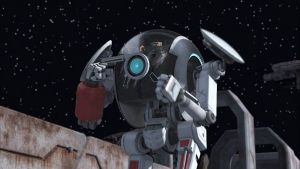 The Journey Home #10 – All right, fine, the internal episode numbering has vanished for good, so I’ll switch to using Crunchyroll’s.

It’s time for a check-in with the General and his henchfrogs, who are still following the same path as our heroes. The problem with subjecting the badguys to peril is that they’re so one-dimensional, there’s not much sympathy to be had. Humpty, on the other hand, isn’t evil, just unlucky to have been co-opted and abused by the frogs.

So it’s Humpty who gets strapped to an operating table, dismembered, and reassembled into a new, monstrous form to provide this week’s reason why this show could never have been made with human characters; and it’s Humpty who gets to make a classic anime move to KO the janitor robot and let everyone escape. Next stop, possibly Earth! 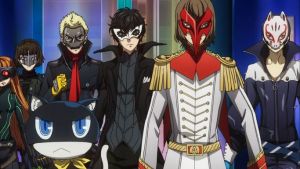 Persona5 the Animation #24 – Akechi gets his chance to transform and show off his Persona, and he isn’t the person in the black mask. But then Sae says that someone has betrayed the Phantoms, and was Akechi supposed to have admitted that he had access to Okumura’s Palace? I am not yet convinced that he’s on the side of good.

A date has been set for the capture of the Phantoms, so they respond to this deadline by… not developing any sense of urgency. Once again the main plot is put on hold to cram in a side story from the game.

They do at least make the first visit to Sae’s Palace, which is the casino from the first episode. But Sae herself hasn’t changed at all in the flash-forward segments, which means that raid wasn’t successful. So what’s really going on in the interrogation? Has Ren let himself be captured to open up the treasure vault inside the Palace?