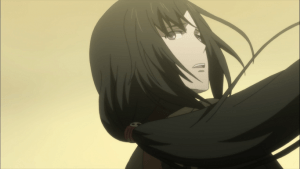 Steins;Gate 0 #20 – Let’s review how the time leap machine works. It scans the brain of the operator, then uses the Rube Goldberg-like chain of machinery including the special CRT in the shop downstairs and some co-opted particle power from CERN to beam that into the past and overwrite the brain of the same person at an earlier point in time. Thus, a natural extension of its functionality is that you might find a cached copy of a brain scan lying around on the PC used to operate it and be able to restore the person from the backup.

And that’s how Okabe from 2011 finally finds himself in horrifying future he’s tried so desperately to avert and then ignore. Mayuri, older Kagari, and older Suzuha are still dead in the past. Okabe himself and Daru have both wasted away to mere shadows of themselves. But Ruka! Seeing Ruka matured into an all-out gun-and-sword-wielding badass warrior almost makes up for seeing her get killed off immediately afterward.

Okabe finds one shred of hope in the time leap machine still existing, but without an explanation of why it failed in 2011, who knows if it’ll be any use. Was it sabotage, or did they run up against some limit of how much time could be meddled with? 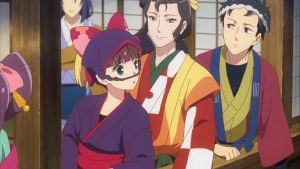 We Rent Tsukumogami #8 – Kōnosuke is back and still being invited to awkward parties, and seems to have picked up a male patron with an excessive interest in him, so Seiji, O-Kō, and the tsukumogami are on the case again. Luckily, the man has decided to rent a whole party boat for a river cruise and needs more people to fill it up.

Here we confront the unfortunate fact that not everything translates well to a visual adaptation. I expect the introduction of Hansuke worked very well in text, but an obviously female voice plus the character designer giving him girly eyelashes kind of gives away the whole game immediately. Still, a nicely handled story, and it’s refreshing to see an anime not treat a gender-disguised character as a joke. (We still got one popular gender-related trope, though: the husband-stealer is a bad person and a bad cook, whereas the jilted wife is a good person and a good cook.)

Incidentally, cruising the Sumida River is still a thing in modern times, although with more to look at than a bunch of watchtowers. If you’re feeling meta about seeing something anime has introduced you to with more anime references, options include a futuristic boat designed by an anime legend. 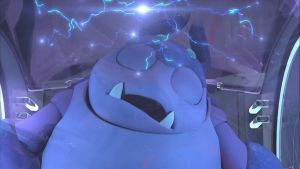 The Journey Home #17-18 – One more evil electricity-sucking bug is lurking in the Stork, but the prospect of a chance at the last piece of takoyaki gives Marbo, Doc, and Midge some courage. Off they go to determine which is the best man by seeing who can defeat the cockroach first, and at that point, is anyone in any real doubt as to who’s going to be winning the prize?

This is a rare moment when The Journey Home really feels like a kids’ show. It’s not just the low-stakes competition with the easy-to-guess punchline, but also the clear message for young viewers delivered by Master Wang afterward.

And then another takeoff attempt is interrupted by yet another robot, only this one is basically a giant vacuum cleaner with root access privileges. And also technically the Stork should have lost all its air by now because I get the impression the garbage dump doesn’t have its own atmosphere, but I suppose it doesn’t matter at this point with Ellen and Master Wang safely in an enclosed chamber, and the others in their mechs. 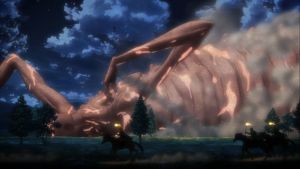 Attack on Titan #45 – Taking the Titan serum orally would appear to be contraindicated. Sure, it turns Rod Reiss into the most amazingly colossal Titan ever, but side effects include mild body horror and weirdly specific destructive impulses. I don’t recall anything explaining why he should want to go and attack that exact town, but apparently there’s some reason that makes Erwin certain he’s targeting it. Hopefully Erwin is just as correct about not needing to evacuate the place.

Everyone sure makes a quick leap to justifying Grisha Jaeger’s actions. He was a nice guy; therefore he must have totally been forced to massacre the Reiss family because otherwise…? He failed at that, and it seems to have turned out all right. Okay, plus or minus an abberant Titan currently bent on the destruction of an entire town.

It is now also asserted that the choice not to destroy the Titans is one for preserving peace, and therefore pacifism is evil. (Again, few people know yet that the Titans are their fellow citizens forced into that form.) And also that the choice to keep hiding the past is brought on by the surviving will of the king who did it, coming along with his memories. Giving Eren control of the Titan, someone who isn’t so susceptible to those memories, means that will is thwarted… for now. But he does have the ability to access them with Historia’s help, so who knows how long that will last. 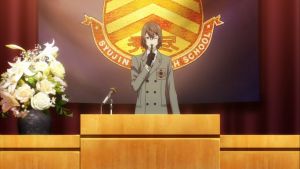 Persona5 the Animation #23 – It’s the obligatory school festival episode! But at least it maintains a connection to the main plot, because at the top of the crowdsourced recommendations for guest of honor is: Gorō Akechi. In between the games and the exhibits and the questionably themed food, he teases the Phantoms before revealing that he knows who they are, he’s been to the metaverse, and he has a job for them.

Not only is this gang terrible at operational security, they have no ability to spot a trap. Akechi even admits that he’s engineered the whole situation that sets up the meeting. Sae’s Palace is too tempting a target. I’m doubling down on my bet that Akechi is the mysterious figure in the black mask.

Now, the place the Phantoms were shown breaking into in the first episode looked like a casino. How does that connect with Sae? I don’t think that’s her true Palace; I think the interrogation cells are more likely to be it. But maybe she needs to see herself as stopping criminals before they can reach her inner sanctum?