Lets pretend that Amazing Stories is actually the cover name for the covert communications department of SPACE FORCE.

Actually, no, lets not do that.

Let us instead just get on with the serious business of informing you of IMPORTANT information regarding the up-coming week of Worldcon Wonderment (which those of you not in attendance can refer to as “things you will sadly not get to experience”*.

Kermit (art director AKA selector of GREAT art), Ira (Editor-in-Chief AKA selector of GREAT stories) and I (Publisher – aka Head of Scut Work) will all be in attendance at our booth (which, incidentally, is going to display some fantastic art work) where our table will be groaning under the weight of FREE issues of the Fall 2018, Volume 76, Number 1 issue of AMAZING STORIES.

We will each, individually be taking time out from our hucksterly duties (yes, I’m old school – Filthy Pros, Hucksters, BNFs, SMOFs, warts and all) to attend various panels, parties & etc., so we may not all be in attendance at the same time, but you can ask when we will be there if you are looking for someone specific.  (We have a duty roster, but of course that schedule will go out the window the minute the convention begins.)

We expect that other luminaries** will be in attendance from time to time:  our contributing authors and artists are invited to take up a seat and hang out whenever they feel the urge and we have offered to serve as a mail stop for the File 770 crowd (you know, the fanzine whose contents we summarize every Sunday).

Our booth is presumably situated next to the SFWA booth (Science Fiction and Fantasy Writers of America) and, if so, we can expect regular visitations from members of that fine organization.  I’m personally hoping to get some time with Cat Rambo, current President, who has been so kind and supportive for many years.  Not to mention so many authors who I’ve only been able to read, but have never met.

We’ll be selling subscriptions to both the electronic and print editions and will be offering 1, 2 and 3 year options.  Bonus:  if you pick up a three year subscription, you’ll get a complimentary Amazing Stories lapel pin 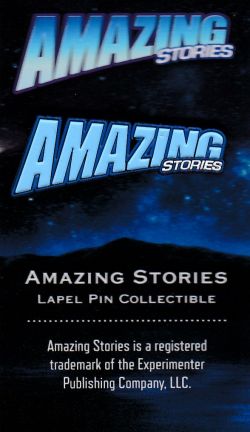 (which, from our recent reveal, we understand has already become very desirable).  Kermit, Ira and I will be wearing ours nearly 24/7 just to make you all a tiny bit jealous.  (Jealousy easily rectified with a 3 year subscription purchase.  See?  Hucksters!)

We’re going to have a gigantic repro of the cover art for this first issue on display.  We’ve not yet quite figured out what to do with it, but we’re pretty sure we’ll come up with something during the convention.

We’re also going to have a small handful of copies of the various books we’ve produced in conjuntion with Futures Past Editions and have just learned that it’s going to be much easier for indy bookstores to obtain these – they’ll soon be available for order from Ingram’s PoD service, so, if you are an indy bookstore that doesn’t like to deal with Amazon, now you don’t have to. (Books will still be available through Amazon as well.) And – they’ll also soon be available through Baker and Taylor for library orders.

Pictures!  We will be taking pictures of fans receiving their copies of the magazine.  In particular, if you are an author, artist, editor, publisher or Actifan, we’d really like to get a picture with you.  If you’d rather not, just let us know.

You’ve come this far and were probably expecting to see a reveal of the cover.  Sorry.  Not till the convention!

As far as the website goes, I will be endeavouring to write up a con report daily, though booth duties, parties and a non-customary amount of alcohol may conspire to interfere with that.  It is MOST likely that the publication schedule will change to a late night final rather than the usual 11 am (est) publication time.

*For those who can not be there:  subscriptions are already available on the website.  Please be aware that we will be servicing those subscriptions AFTER the convention has concluded and we have all returned to our homes.  (We’ve already had one individual request a refund because they’d not yet gotten “their product”.  That’s not because we were stiffing him, it’s because there is no product to send, yet.  To be more specific, the electronic editions are ready to go and the print copies are in trucks, being shipped to various places across the country.  Further, we committted to debut at the convention, which means folks at the con will be the first to actually get their copies.  We appreciate how eagerly everyone wants to get their copy, but there is a schedule and dammit, we’re sticking to it!)

**The phrase “We expect that other luminaries…” would seem to suggest that we have adopted the mantle of luminary for ourselves.  We’ll stand by the judgement of those who get their copies at Worldcon.