An interview with Erin Bowman, author of the space thriller Contagion 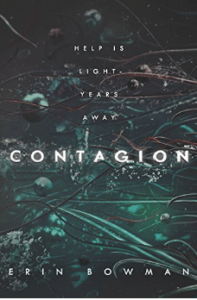 I love science fiction that keeps me on the edge of my seat, reading way past my bedtime, and especially if I can feel myself ducking for cover when the characters go around that next blind corner or take a ride in a dodgy elevator. If the book puts me in the same headspace I occupy when watching a classic movie like “Aliens,” so much the better!

Contagion by Erin Bowman fell very much into all these categories and I was excited to interview her about the novel. Although the book was published by the HarperTeen imprint at Harper Collins, and one key character is a young intern, I assure you this is a full on science fiction thriller for all ages Young Adult and up.

The blurb (courtesy of HarperTeen):  After receiving a distress call from a drill team on a distant planet, a skeleton crew is sent into deep space to perform a standard search-and-rescue mission.

When they arrive, they find the planet littered with the remains of the project—including its members’ dead bodies. As they try to piece together what could have possibly decimated an entire project, they discover that some things are best left buried—and some monsters are only too ready to awaken.

Veronica Scott for Amazing Stories: What were your major influences or ‘story sparks’ when writing the book?

Erin: I am a sucker for gritty space thrillers and my all time favorite sci-fi movie is ‘Alien’ (followed closely by ‘Aliens’). The dark, tense, foreboding atmosphere of these movies definitely inspired Contagion. There is no alien in Contagion, but there is something foreign and unknown, and I tried to build suspense around that much in the way that ‘Alien’ builds tension around the xenomorph. (I may have even listened to this Nostromo countdown sequence while writing the climax of the novel.) I also love the cast dynamics in ‘Alien’: The way a crew member (Ash) has a damning secret, the way characters make poor decisions (like bringing the facehugger onboard in the sake of helping a friend), how the instinct to survive kicks in hard.

Another big influence for me was ‘X-Files’, specifically the set-up of many episodes. You know the drill: a strange occurrence gets Mulder and Scully called in and they find themselves scrambling to uncover what happened, often unearthing more mysteries before getting to the truth. I find this sort of setup (and the subsequent reveals) addicting.

Lastly, the largest story spark for Contagion came from a nightmare. In this dream I was part of a crew that had landed on a remote planet. Our mechanic began acting strangely and after watching him claw at his own face while his eyes filled with blood, we isolated him in an air lock. That image alone was the initial story spark. I started a notebook the next morning (I keep individual notebooks for each story idea I explore) and built the world, plot, and characters around that moment. In the finished novel, it’s not the mechanic who falls ill first, nor an airlock that contains him, but this nightmare remained a big source of inspiration throughout drafting and revising.

ASM: Quite the set of influences (and since ‘Aliens’ is my personal favorite movie ever, no wonder I so loved this book!). Which was the most difficult character to write and why?

E.B.: I actually found Thea (one of the two main protagonists) the most challenging. She’s a bit reserved, soft-spoken, and fairly sensible… I’ve always had an easier time writing characters who are risk-takers; gutsy and sassy, jaded and sarcastic. But Thea has a quiet strength about her, and it just took me a little while to figure out how to bring that to life. And once the contagion is loose—once Thea is fighting for her life—she turned out to be a bit of a risk-taker after all.

ASM: I enjoyed Thea’s character arc in the novel. What distracts you when you write?

E.B.: The internet. Always the internet. I finally bought Freedom last year so that I could block distractions like social media while still having the ability to stream music and quickly research/fact check things. It’s been a game changer.

E.B.: “Follow the bloody footprints, they said. What could go wrong, they said.”

The security detail grumbles this quote in Contagion. I love this because while he’s being sarcastic, it’s also prophetic. (And exactly what the reader is thinking, to boot.)

ASM: Is there a TV show you’ve recently binge watched?

E.B.: My husband and I recently binged the most recent season of ‘iZombie’. I love how this show doesn’t take itself too seriously but also manage to pack quite the emotional punch from time to time. The season finale definitely got to me.

As for movies, there are a few I always get sucked into rewatching: ‘Jurassic Park’,’ Forrest Gump’, ‘Alien’ + ‘Aliens’, ‘Back to the Future’, ‘ET’, and any Indiana Jones movie except ‘Crystal Skull’, which I pretend doesn’t exist.

ASM: Sounds like you’re describing most of my movie collection! What’s next for you?

E.B.: Contagion is the first in a duology and the second book will be out next summer. July 2nd, to be exact, assuming everything stays on schedule.

I’m also playing with a new book idea that incorporates a little of everything I’ve published so far—dystopia, sci-fi, western. I’d really love for it to be my next published work, so here’s hoping it sells!

ASM: Can’t wait for that sequel and the further adventures in the Contagion universe. What’s on your To Be Read List?

E.B. : I’m currently reading I Am Still Alive by Kate Marshall, and up next is Fates and Furies (Lauren Groff) and Monday’s Not Coming (Tiffany D. Jackson).

For more about Erin and her books visit http://www.embowman.com/

USA Today Best Selling Author Veronica Scott usually covers science fiction romance for Amazing Stories, when she isn’t writing SFR novels herself. She was raised on a diet of science fiction classics, however, and may interview SF&F authors in this space from time to time.

Astronomers discover a nearby free-range planet with incredible magnetism

First, a little awards news: Nominees for the Seiun for Best Media (roughly equivalent to Hugo nominees for Best Dramatic Presentation) include two anime series, Bodacious Space Pirates and Eureka Seven AO. E7AO is a particularly unsurprising choice– I’ve never seen a TV show that so desperately needed a viewer advisory on the front of […]

New Satellite Will Shift Shape While In Space

Goth Weekend in Whitby – Just in Time for Halloween Inspiration