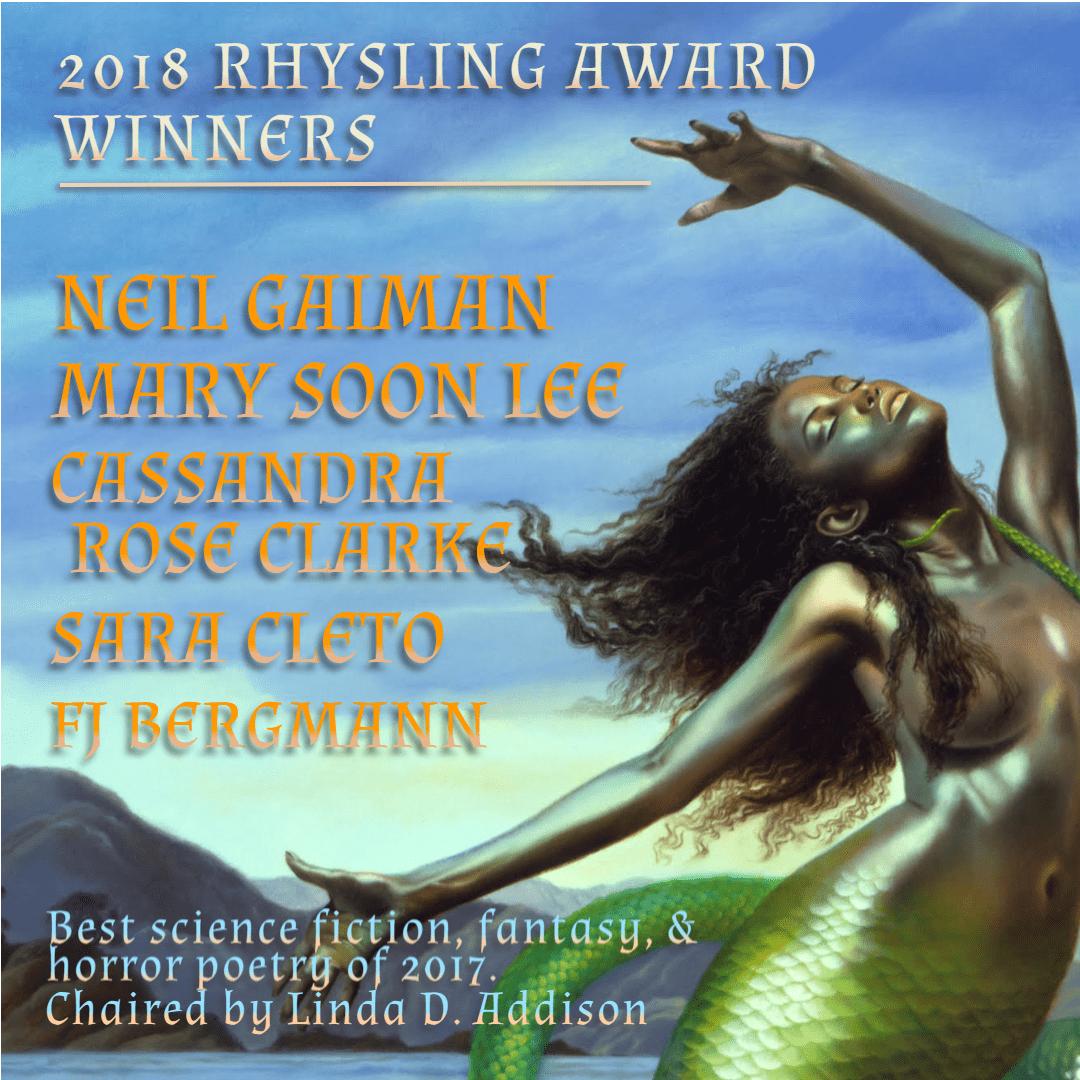 The Rhysling Anthology Editor and Award Chair, Linda D. Addison, and the officers of the Science Fiction and Fantasy Poetry Association are pleased to announce the winners of the 2018 Rhysling Awards which include 1st place winners, best-selling and beloved author, Neil Gaiman, and the prodigious poet, Mary Soon Lee for their poems The Mushroom Hunters” and Advice to a Six-Year-Old” respectively.

Each year, the SFPA publishes the Rhysling Anthology comprised of works nominated by its international membership for the Best Science Fiction, Fantasy, and Horror Poems of the previous year.

SFPA President Bryan Thao Worra said: “My deep and personal congratulations to all of the winners and all of the nominees. The SFPA thanks everyone who nominated these poets and those who took the time to vote this year. Every year the awards are filled with great excitement, even as it is often deeply challenging to choose the best poem among so many styles and talented voices from around the world.

We’re looking forward to many more decades ahead of our members celebrating profound possibility, inquiry and imagination through verse.”

Winning works are regularly reprinted in the Nebula Awards Anthology from the Science Fiction and Fantasy Writers of America. Rhysling Awards are considered in the speculative literature field to be the poetry equivalent of the awards given for prose— achievement awards given to poets by the writing peers of their own field of literature.

First established in 1978, the Rhysling Award is now in its 40th year. Science Fiction fans may recognize the name. The Rhyslings were named for the blind poet Rhysling in Robert A. Heinlein’s short story The Green Hills of Earth.” Rhysling’s skills were said to rival Rudyard Kipling’s. In real life, Apollo 15 astronauts named a crater near their landing site “Rhysling,” which has since become its official name.

The Science Fiction Poetry Association offers 3 annual awards for speculative poetry: the Rhysling Awards recognize individual poems, the Dwarf Star Awards are given for short-short poems, and the Elgin Awards are presented for genre poetry books and chapbooks. The organization was also founded in 1978 to bring together poets and readers interested in science-fiction poetry.

The Rhysling Awards will be formally presented at DiversiCon 26 on Saturday, July 28th at 3:00pm in St. Paul (Bandana Square Best Western) by SFPA President, Bryan Thao Worra and other members of the SFPA executive committee. All members of the SF community are welcome to attend the ceremony. For scheduling at updates, visit www.diversicon.org.

2nd Place: “How to Grieve: A Primer for Witches” – Sara Cleto

The SFPA was founded in 1978 to bring together poets and readers interested in speculative poetry and is an international literary organization. It produces two journals and confers three annual awards in speculative literature. You can visit them online at www.sfpoetry.com

(Editor’s note:  Congratulations to all of the winners.  We’re particularly pleased to see one of our contributors, F.J. Bergmann, among them!)