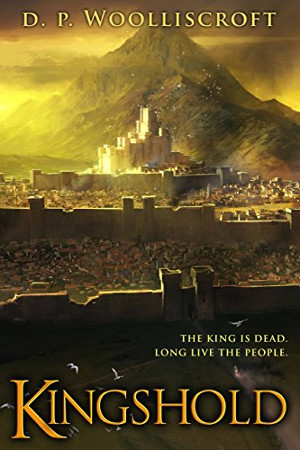 For those looking for a fresh take on the worn fallen kingdom fantasy tale, Kingshold just might be the escape you’re looking for. For a self-published book, this fast-paced story by D.P. Woolliscroft reads like something from one of the larger fantasy distributors. There are a few noticeable stumbles and editing glitches that remind readers that this is a maiden voyage, but overall it is a fun adventure that is sure to garner plenty of fans wanting more.

The story takes place immediately following the death of the King and Queen of Kingshold, a land of long discontent where the citizens were not too saddened by the news of their ruler’s demise. The powerful magi Jyuth who has stood firmly behind the throne decides to try something new when the time comes to replace the ruler. Why not let the people decide who they would like as a governing proctor? Why not hold an election?

This unique approach to reseating the throne has many problems, all of which come to light in this world of political turmoil and magical mayhem.  Not surprising, and perhaps the most compelling aspect of Kingshold is that this fictional premise emulates a lot of current, real world issues.

Though some of the characters are archetypical in name and social role and the dialog can become rigid at times, the large cast is well orchestrated to maintain a flowing plot, an element many first-time authors neglect to address with success. This also helps the reader focus more on the core characters who are well developed and easier to follow.

One distracting technique the author may want to avoid in future books is the unnecessary use of historically inaccurate slang, especially from a narrator who is supposed to be considered reliable. An example of this is the author’s use of the term “stogy” which appears in the first few pages. Granted language used in fantasy can be fluid and is typically unrestricted, but a term originating in the mid-19th century North America region and more suitable for pulp literature is quite shocking to find in a fantasy world. And when this occurs so early in a book, it may dampen the will to continue. Luckily, I continued.

A skilled worldbuilder, Woolliscroft does paint a vivid setting that allows the reader to be effortlessly absorbed into the story. This also helps establish a firm foundation for any Kingshold books that follow.

A strong debut fantasy novel with noted similarities to modern social and political issues, Kingshold by D.P. Woolliscroft is an entertaining story that differs from the traditional fantasy adventure.