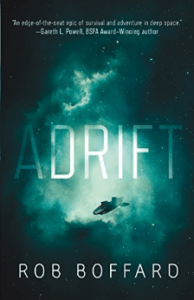 Editor’s Note:  Some language may not be appropriate for all audiences

Veronica: I recently read a newly released science fiction novel that I found myself unable to put down because it was so exciting. Had to read it in one sitting – forgot or abandoned everything else on my to do list for the day!

Adrift by Rob Boffard is a science fiction roller coaster ride of plot twists and turns, and high suspense. Every time I’d think I knew where the plot was going, something new would happen and take the characters – and the reader – in a new direction.

Possibly no one ever had such a bad first-day-on-the-new-job as Rob’s heroine Hannah.

I was fortunate enough to interview Rob about the book and get a few insights into the story and his writing processes.

First, the blurb for Adrift (courtesy of Orbit):

Sigma Station. The ultimate luxury hotel, in the far reaches of space.

For one small group, a tour of the Horsehead Nebula is meant to be a short but stunning highlight in the trip of a lifetime.

But when a mysterious ship destroys Sigma Station and everyone on it, suddenly their tourist shuttle is stranded.

They have no weapons. No food. No water. No one back home knows they’re alive.

And the mysterious ship is hunting them.

Veronica for Amazing Stories: What were your major influences, or sparks for the story when writing the book?

Rob Boffard: There was actually really just one – a trip I took with my family to Chicago. We went out on Lake Michigan on this crappy little tourist boat. It wasn’t the most exciting ride, so I started gazing out at the city, and started idly wondering what would happen if it were blown up. What would become of us? Presumably we’d just mission over to the Canadian shore…but what if we couldn’t? By the time we docked, I had the entire story in my head – or the broad strokes, anyway. It was too good not to write.

I guess, if I have to pick a couple more, is that my wife and I were going through some immigration nonsense in Canada at the time, and we were feeling a little displaced. That fed into the book itself: this feeling of being completely stranded in a place where you could die horribly at any moment, because physics doesn’t give a shit about you. Well, perhaps that’s a bit extreme; I’m not sure Canada’s immigration authority was planning to murder us. But I was definitely feeling a little isolated and anonymous at the time.

ASM: Well it’s true that physics doesn’t care! Which was the most difficult character to write and why?

RB: Probably Jack, the alcoholic, embittered hotel critic. I thought he was going to be easy, because that kind of character is a lot of fun to write and doesn’t take a lot of effort… Unless they turn out to be a lot more complex and hard to pin down than you thought, with emotions and feelings that you didn’t anticipate. He surprised me the most, because I genuinely thought he would be the biggest internal threat to everyone on this little tourist ship, and he turned out to be a lot more nuanced. The problem with that, of course, is that if a character shows you that side of them, you have to take it all the way. You can’t half-ass it. That meant a lot of heavy lifting to make sure that there were good reasons for him acting the way he did.

ASM: I never felt like I had Jack figured out when I was reading the book – he kept surprising me, but in a way that was quite consistent with his backstory. He was certainly a complex guy! Do you think of yourself as a plotter or pantster when it comes to writing? 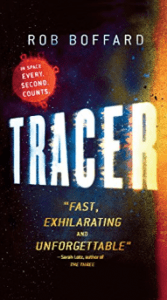 RB: A little bit of both. When I wrote my first novel, Tracer, I had no idea how to actually write a book. I ended up doing an outline because it just seemed like the most logical thing to do. The success of that book, and the pleasure I got from writing it, meant that I’ve stuck to the same approach ever since. However, I’m also very careful not to let the outline constrict me. Every single book has a moment where things go off script, where the characters take over, and where you have to make things up on the fly. Ideally, every moment of the book would be like that, but writing a book is a fraught experience, and I like having a roadmap that I can return to if I get a bit lost.

ASM: What distracts you when you write?

RB: I’m not known for making brilliant decisions, but I did make at least one quite recently: the banning of all phone/email/social media/Internet activity before I’ve done my morning writing. It’s been absolutely brilliant. Before that, the biggest distraction was going down the rabbit hole of social media. Not a surprising answer, I grant you, but also one that I think most writers face these days.

ASM: Yes, I have to really pay attention to how much time I spend on social media when I’m supposed to be writing, for sure.  Is there a TV show you’ve recently binge watched?

RB: ‘American Gods’. It’s mad. Brilliantly, weirdly, stupidly mad. I’m one of the very few people who didn’t actually enjoy the book at all, so I was skeptical, but the show was such a visual feast that I was totally hooked. Plus, Ian McShane is a Don.

RB: Just one. “Who the fuck pissed in your cereal?”

ASM: What were the books or movies that inspired you to become a science fiction author?

RB: I’m unusual in that I’m not a textbook sci-fi or fantasy geek. When I was growing up in South Africa, things like Dungeons & Dragons, ‘Star Trek’, even ‘Star Wars’, were very easy to come across. They were there, but I didn’t get exposed to them to near the same extent as kids from the US, for example, would have been. What I gravitated towards were mystery books and thrillers, by people like Ed McBain. I can only really remember one sci-fi novel that I really got into as a kid, which was The Knights of the Black Earth by Don Perrin and Margaret Weis. Even then, when I wrote Tracer, I saw it as a thriller that just happened to be set in space. I love everything to do with space, but I’m far more interested in present day or near future technology than far future. Fortunately, I’ve read some really brilliant sci-fi since I started writing books. Big favourite is the amazing Illuminae series, which left my jaw on the floor.

ASM: I read the entire McBain 57th Precinct Series as a teenager – borrowed my Dad’s beat up paperback copies. And I’m totally in agreement about the Illuminae books by Arnie Kaufman and Jay Kristoff. I actually bought the hard copies so I could have all the graphics and visual elements right there on the page in front of me, although I usually read on a kindle.  What’s next for you?

RB: I have a superstittion of not talking about things I’m working on until they are ready to go, so I can’t say right now. I will say it’s something very different, and you’ll be seeing it at some point next year.

ASM: Fair enough!  I can totally respect another author’s superstitions. I have more than a few myself.  What’s on your To Be Read List these days?

RB: Lifelike, by Jay Kristoff. I’ve also heard really good things about the new Gareth Powell book – but then, I’m kind of biased, because he said he really liked Adrift. I’ve also got the Hugo nominees to go through, which is going to be a lot of fun.

For more about Rob and his books visit http://www.robboffard.com/

USA Today Best Selling Author Veronica Scott usually covers science fiction romance for Amazing Stories, when she isn’t writing SFR novels herself. She was raised on a diet of science fiction classics, however, and may interview SF&F authors in this space from time to time.