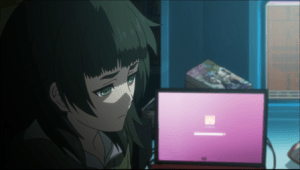 Steins;Gate 0 #11 – Okabe is in luck for once, and the secretive trusted expert Hiyajō has hired is someone already known to them both. After a lot more agonizing about her decision, and another hair-raising escape from the mysterious commandos (and a nice little homage to The Shawshank Redemption mixed in there), Kurisu’s old laptop is beyond use. Since the time machine can’t be constructed with information collected via itself, that means the laptop is also safe from time-traveling shenanigans. The troublesome Americans are on a plane back home, Hiyajō is going to move forward with her life, and Okabe thinks World War III has been averted. Everything’s fine now, right?

Hahahahahaha of course not. If World War III were no longer happening, Suzuha’s memories of it would be gone. Amadeus still has enough information to recreate Kurisu’s time travel theory. The commandos still haven’t gotten what they wanted. Kagari’s missing ten years still haven’t been filled in. Nothing is fine.

Well, one thing is fine, and that’s the treatment of Hiyajō these last couple episodes. She’s gotten the space to reflect and sort out her feelings about Kurisu for herself. Okabe has helped, but he hasn’t taken over her story and solved her problems for her. It’s especially nice given that Hiyajō is a member of an indigenous minority that gets even less screen time than the Ainu. When she said in the first episode that her name sounds weird but it’s a lot more common in Okinawa, she’s basically saying she’s Ryukyuan. (Oblique, yes, but Japanese minorities are almost never directly named in anime.) 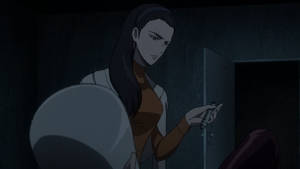 Megalobox #12 – As predicted, Yūri has his Gear removed so that he can fight Joe as an equal, leaving Yukiko Shirato muttering about what exactly the use of a tournament of cybernetically enhanced fighters is when no one has enhancements. Well, she does have a point there. Maybe remember to put something about that in the rules next time?

As the warmup for the final battle, a couple of familiar faces come back to explain how fighting Joe was a transformative experience for them. Mikio Shirato and Aragaki both look awfully happy and relaxed for defeated men. If they lost, they are at least confident that they lost to the very best, and they’re willing to make sure his championship is memorable.

With Yukiko the odd one out, this turns into an unfortunate rendition of Women Just Can’t Understand Manliness. But even in this, Megalobox executes with grace and style. We know where the story is probably going, but even so it’s possible to be confident that it’s going to deliver the best finale of the season. 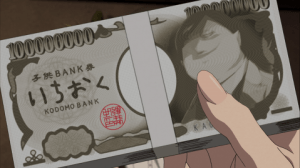 Persona5 the Animation #12 – Forget that idea that Sae Nījima became interested in Ren because Makoto had joined the Phantoms— she doesn’t find out until she’s interrogating him. Instead, she’s after them because they cost her the promotion she could’ve had by stopping Kaneshiro himself. I’m beginning to wonder if she’s being built up to eventually be a full-fledged opponent to the Phantoms.

The confrontation with Kaneshiro goes according to the established routine, only his final form doesn’t clash with the rest of the visual style so badly and the breaking into rap is very extra. I’m kind of disappointed that it didn’t turn into a climactic rap battle.

Makoto sees that she can be useful to the Phantoms when it turns out they don’t really have a plan for infiltrating the bank. Having someone around to remind them to not discuss their business while standing around in public would be awfully useful too. But there are bigger problems afoot— specifically, that mysterious person with a black mask and access to the same dimension as the Phantoms. Who could it be? Well, who’s been hanging around in this story and badly underutilized for several episodes now? How about that boy genius detective? 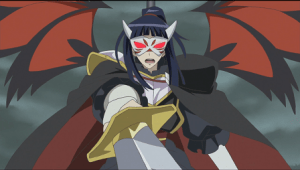 Cute High Earth Defense Club HAPPY KISS! #11 – At last it’s clear why Furanui attached himself to Ata. Ata has been a boiling reservoir of petty grievances ever since he and Kyōtarō first crossed paths, just needing an extra push to erupt. Ata was never the ideal leader, he was the perfect person to build into the monster needed to defeat Karls. That explains why Cute High gave up on tying things to his theory of government episodes ago and has been focusing on his frustration instead.

Kyōtarō’s response is classic Kyōtarō: take it, apologize, hug it out, naptime. Except there will be no naptime, as what the prime minister of Honyala Land has been up to all this time has apparently been laying the groundwork for a royal kidnapping. (Or, a “final test” that simulates a royal kidnapping.)

Ata’s deepest grudge also finally provides the link we’ve been looking for to the previous series. For those not familiar with it, the coupon came from Yumoto Hakone, leader of the magical boys from all the previous seasons. That places this series a mere ten years later. It’s still a little odd that Mr. Tawarayama hasn’t aged at all, though. 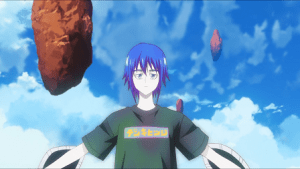 Hakyu Hoshin Engi #22 – Another heaping helping of backstory puts us ever more firmly in science fiction territory. It’s not the ancient past but the far future, after civilization has risen and been wiped away again and again by Joka. The Sennin are the highly evolved humans who have survived all that.

And Ō Eki was once one of Joka’s people. His soul was “split” by Genshi Tenson, which explains how he’s dead but not, and he’s been secretly working against her. Or at least he was before joining forces with the Sennin. The level of cruelty he’s displaying now suggests that his corruption by Dakki was genuine. That or he’s in very, very deep cover.

There’s still an awful lot left to wrap up in the finale, and I’m having doubts that Hakyu Hoshin Engi is going to manage it gracefully. We got the final confrontation between Bunchū and Hiko, but that leaves Bunchū vs. Taikōbō, getting Dakki back onstage, solving the Joka problem, and what the heck happened to those three sisters, anyway?