When my friends invited me to see Star War’s newest movie Solo: A Star Wars Story, I had a sort of ‘meh’ feeling about going. I like my friends and enjoy their company, so I accepted. The reason the movie didn’t excite me that much was because the last two episodes of this highly acclaimed series put me to sleep.

I’m a senior. I am not a big fan of loud noisy space ships shooting missiles and blowing up the universe scene after scene.

Now true-blue Star Wars fans can get on my case if you want about the negative attitude I have about the series. But being an author who has listened to lecture after lecture on ‘how tos’ of storytelling, and have read book after book on character arc and pacing, and who is a huge fan of Michael Hauge’s screenwriting tips, I have found Hollywood’s massive special-effects-takeover somewhat lacking. And boring.

But because I like my friends I went to see Solo.

From the opening of the movie I sighed with relief. “Could this be? The old Star Wars is back?”

In fact, in my humble opinion, Solo was even better than any of the ‘old’ Star Wars. 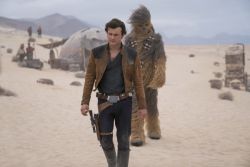 Alden Ehrenreich as a young Han Solo was loveable.

I keep reading critical reviews about how “Star Wars fans are disappointed” in this movie. Come on, guys! Did these critics really ask Star War fans before they wrote their columns? I posted kudos to Ron Howard on my Facebook page and within hours I had 33 people agree with me. Some of my friends left hearts and capital-lettered comments saying “I agree!”.

Not only did we see a young and rebellious Han Solo in all his zealous self, but we had a wonderful glimpse into his backstory.
A good plot. Stirring relationships. A few truly tense moments that left us wondering, and all the shoot-em-ups Star War junkies look for. What more could you want?

Then there were close attention to the details that some of us filmmakers look for in the cinematography – editing niceties such as color…yes color of a film is crucial as contrast and hue can make or break a film as well as can sound.

And for me, and I’m fussy about pacing and humor.

One of my major complaints about the original Star Wars was the inappropriate moments the humor was inserted. (Why should those silly robots crack jokes when people are being killed?) Not so in Solo. The comic relief came at all the right times.

To me, this was the best Star Wars episode of them all.
Not sure why “the fans” aren’t raving,(I bet they are) but I’m telling all my friends they should go see Solo: A Star Wars Story.