Made on the Moon is a little novella by Steven Paul Leiva that looks at one man’s determination to dream the impossible.

Everyone has their own perspective on space travel. Is it worth the time, effort and money to reach for the stars? For some, the answer is obvious. 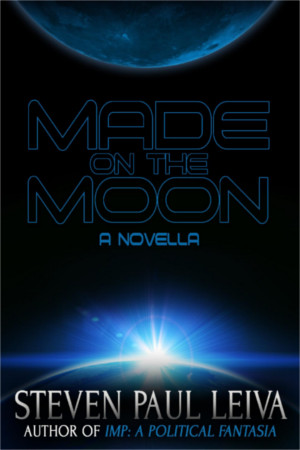 Made on the Moon is a little novella written by Steven Paul Leiva published in ebook from Crossroad Press that tries to answer these questions from a unique and somewhat unexpected viewpoint.

At first the dialog was a bit confusing and seemed disjointed as the story bounced around a bit, a dangerous gamble for writers hoping to grasp readers and not let go. But it doesn’t take long to realize the confusion is all part of the journey, sharing the experience of three interviewers delving into the twisted yet methodical mind of Stanley Lewis. All Stanley ever wanted in life was to go to the Moon. And discovering what lengths he is willing to go to reach this goal is at times both sad and inspiring.

Stanley is a sincere character with a vivid imagination and an innate ability to take the reader in multiple directions at the same time. With a vivid recollection of a century worth of memories, he instills a smooth mixture of James Thurber’s daydreaming Walter Mitty imagination and the relentless “what if” determination of a Ray Bradbury (which should not surprise Leiva fans who might’ve read the author’s “Searching for Ray Bradbury,” previously reviewed by Amazing Stories here).

Even though you will most likely feel the urge to often pause as you digest the plot, the story is surprisingly a very quick read with a satisfyingly surprise ending reminiscent of something one might find in a Twilight Zone episode. Once all of the loose pieces come together, readers will be able to look back and give an agreeable, “I see what you did there,” kind of nod to the author. So, stick with it.

With just enough satirical elements to emphasize the blurred line between logic and insanity, true fans of science Fiction will find a kindred attachment with the Stanley Lewis character. It is a hero’s journey, a relentless determination to dream the impossible. Made on the Moon by Steven Paul Leiva shows us that reaching for the stars is not just a dream, for some, it is a way of life.

Steve tells you where to get a free SF book and revisits/rewrites an old column dealing with Worldcons and nametags and such.

University of Glasgow Launches Centre for Fantasy and the Fantastic