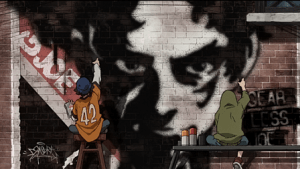 Megalobox #7 – Finally, a proper cyborg. While other megaloboxers just use their Gear to give their punches some extra oomph, Mikio Shirato has taken things to the next level and added some true intelligence to his. Unfortunately, his computer wizardry doesn’t stop there.

Megalobox has updated Ashita no Joe very, very well. The ultimate underdog of our day and age is the undocumented resident, and the villain of the moment is the rich tech bro who knows way too much of your personal information. The clang of the closing doors is the sound of Gearless Joe’s career ending for good. I expect that when this show is over, that’s going to be one of the iconic moments of it.

There are still ways to get him into Megalonia. The promoters can decide that he’s too popular to ignore even if he did forfeit. One of the already-named competitors could suddenly become conveniently ill or dead. Some previously unmentioned technicality could be pulled out to disqualify Shirato.

Or it could turn out that Megalonia has been a great big red herring and the plot is going somewhere else entirely. A show has to be very good and very confident in itself to be able to pull such a radical change off, but Megalobox is good enough. 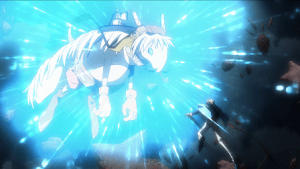 Hakyu Hoshin Engi #17 – With Ōtenkun dead, anything resulting from his powers, like the parasites sapping the fighters of Kongrong Mountain, should vanish. Possible explanations: (a) he’s not really dead; (b) they were created by someone else, who is still alive; or (c) let’s forget about figuring it out and pull out a previously unmentioned power to obliterate them regardless!

If you’re unfamiliar with Tove Jansson’s Moomins, take a look at that link. In addition to Sūpūshan’s obvious resemblance, the appearance of Sūpū Valley, Sūpūmama, and Sūpūpapa removes any doubt as to the homage. Japanese readers of the source manga are expected to get the reference, because the Moomins are incredibly popular in Japan. There’s a Moomin café in Tokyo, and a Moomin theme park will be opening nearby next year.

Back at the main plot, it’s become clear over the last couple episodes that Genshi Tenson and Tsūten Kyōshu have long known who the real enemy is. But even they weren’t strong enough to oppose Joka directly, so the Hoshin Project was created as a cover for whatever is really supposed to happen.

It’s not clear how the destruction of the Sennin strongholds furthers that goal, but Taikōbō and Bunchū are, knowingly or not, completely on the same page about destroying them. There should be some pretty earth-shattering kabooms coming up soon. 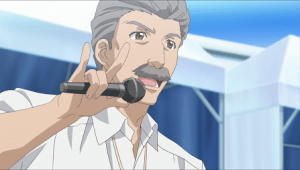 Cute High Earth Defense Club HAPPY KISS! #7 – How has this show made it two and a half seasons without the nearly obligatory swimsuit episode? Well, time to fix that, and in the bargain we get the return of the Pretty Boy Contest from season 1. Then, it was a jumping-off point for lampooning masculinity. Now, it’s another episode of low-key antics, including a surprise shout-out to another very silly show.

Presiding over the festivities is the school principal, who goes unnamed but is clearly Mr. Tawarayama, former adviser to the Earth Defense Club. Although he is, so far as we know, unaware of the fact, having been an animated corpse at the time. He was eventually supposed to get better due to an application of alien technology, and it looks like it finally worked. Of course, since frighteningly advanced technology was involved, the fact that he doesn’t look any older doesn’t necessarily mean this is happening right after the last season. 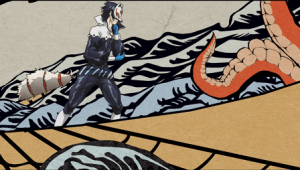 Persona5 the Animation #7 – The Phantoms are all ready to cruise into Madarame’s Palace, but it’s not so easy this time: psychological effects propagating from the physical world to the Metaverse mean that a door blocking the way in the Palace first has to be opened in Madarame’s house. Which for some reason means that now Ann has to get nude, as if the story hadn’t muddled its point about her escaping from being objectivized enough.

The point of all this is really to pull Yūsuke in, open his eyes about Madarame, and get him on the team. He finally gives in when he finds out that his work isn’t just helping a kindly old man with artistic block but helping fund a lavish lifestyle. (Incidentally, if the plot to sell forged copies of the allegedly stolen Sayuri sounds familiar, you’re recalling either a famous fabrication about a real theft or a classic Doctor Who story.)

Yūsuke’s Persona, Goemon, is named for the 16th-century bandit Goemon Ishikawa, who was remade into a folk hero after his death. It was claimed that he was a rogue ninja, and that he stole from the rich and he gave to the poor, much like Robin Hood. Fantasy Goemon is a great fit for the Phantoms. And with that necessary moving around of pieces taken care of, I hope they can wrap things up with Madarame now. 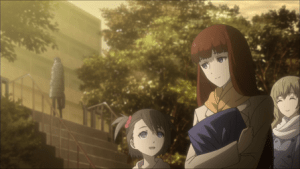 Steins;Gate 0 #6 – Welp, there’s another show I can cross off my list of things I can recommend to my trans friends. It has once again imitated the original Steins;Gate, only when someone took too much interest in Ruka’s crotch back then, the scene was focused on how unpleasant it was for her, and the offender was immediately forced to spend three hours in a stress position by Kurisu. I have never missed the real Kurisu more than right now.

At least no one questions Ruka’s right to serve as a miko (shrine maiden). If it looks a little weird that all her friends are joining in all of a sudden, this is perfectly normal in Japan. Shrines throughout the country hire extra mikos for the holiday rush, and there are no religious qualifications for the job other than being a young woman.

Once the fun’s over, it is over. Because underneath their blundering act, the American scientists are looking for Kagari, and once they’ve spotted her, it’s a straight line to Okabe reliving his nightmare of all his friends being threatened by mysterious armed figures. Things have gotten serious in a hurry. In fact, if Kagari is connected to the goings-on in the US, things were serious before Okabe ever met Hiyajō. Their meeting, and his introduction to Amadeus, all look like part of a setup now. He’s been caught in a trap since episode 1.

The Golden Amazon, a Pulp Fiction Heroine Who Made Doc Savage Look Like a Wimp

Boskone Starts A Week From Today: My Schedule