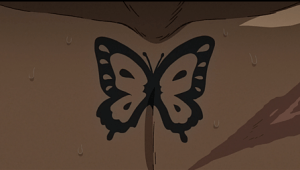 Megalobox #5 – Modern Japan famously maintains  a military only for purposes of defending its territory, but it has been participating in UN peacekeeping missions since 1993. Throw in a cultural tradition of treating mental illness as a personal failing to be kept to oneself, and it’s got just as good a chance as any country of having a population of veterans with issues brought back from overseas.

Compounding Aragaki’s trauma is that Nambu’s gym seems to have been a kind of surrogate family for him— but one that wasn’t there when he wanted to reach out for help. Now Nambu has resurfaced, and he’s taking care of some punk kid from the slums, and, well, it’s no surprise that Aragaki wants to completely destroy him.

The more we learn about Nambu’s past, the more it highlights what we don’t know about Joe. Maybe he’s just supposed to be an enigma, a complete nobody from nowhere. But given that anime is just as youth-obsessed as every other form of TV, I don’t mind if the story is just more interested in talking about its older characters. 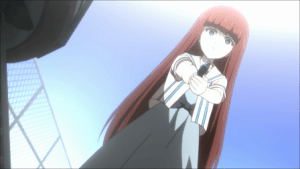 Steins;Gate 0 #4 – How is the grim hard-sf tale of AI and time travel going this week? Leskinen is hoping Okabe will develop romantic feelings for the Amadeus simulation of Kurisu. Amadeus is trying to fix Okabe up with Hiyajō. And Suzuha is desperately trying to get her parents’ romance started.

But darker things do intrude when Suzuha admits to having had a travelling companion: Kagari Shīna, an alleged war orphan adopted by future Mayuri, who bears a suspicious resemblance to Kurisu. In all likelihood she’s a clone, who wound up with Mayuri after future Okabe was captured (or taken into hiding “for his own good”, perhaps, by the local military).

The attention paid to Okabe’s phone in the future scene suggests Amadeus may have been involved somehow. The nature of Amadeus’s offer to help with the search for Kagari in the present is a reminder that it’s not human, it’s just wearing a mask that looks like one. What is its agenda?

Kagari appears to be opposed to erasing the future, and she’s almost certainly Ruka’s father’s mystery guest. And just as she reappears, someone is bessing about with time again. Well, either that or Okabe is finally losing touch with reality. Or both! 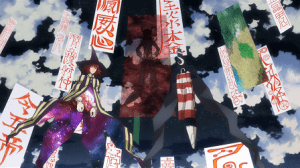 Hakyu Hoshin Engi #15 – Hakyu Hoshin Engi makes up for its off week with yet another fabulously realized space. The mechanics of the fight with Kinko Seibo and Yōtenkun are fairly simple once the crew from Kongrong figures out what’s really going on, but who cares, look at that scenery!

Yōzen is able to save the day with one last gasp of power, but now he’s barely able to hold a human form. Ōtenkun is hoping to drain him enough that he has to reveal his true form to all his friends. There’s just one small problem with this plan: What if they still think he’s a great guy despite being what he is? Our heroes are certainly quick to fight yōkai right now, but that seems to be only because they’re allied with Kingo Island, not from any generalized prejudice.

Meanwhile, Taikōbō is reminded that he did have a goal at one point, and he needs to quit wasting time and go fight the boss in order to achieve it. He’s decided that if there can only be one war between the Sennin, he’s going to really make it count and destroy both sides. The end-credits sequence suggests he’s going to manage it, but I don’t think I saw any pieces of Dakki’s ship lying around… 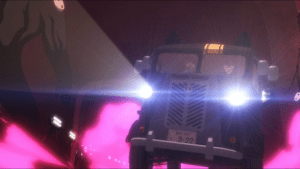 Persona5 the Animation #5 – With Kamoshida taken care of, Morgana uses the lull in the action to introduce the team to some more rules of the magical universe. Since they are in Tokyo, of course the collective unconscious that connects everything resembles the subway. And of course the idea that a bus can look like a cat is very strong there, because everyone has seen My Neighbor Totoro. I’m not sure what makes the Citroën HY the official van of Japan’s dreamworld, though.

The team also has a chance to make some decisions of their own, like selecting a leader, setting some ground rules, and most importantly, picking a name. They decide to call themselves “The Phantoms”, but hang on, hasn’t their name already been revealed as the Phantom Thieves, or the Phantom Thieves of Hearts?

The word being translated as “Phantom Thieves” is kaitō, a term for a character archetype similar to the gentleman thief in Western literature. Unfortunately, the translator has been painted into a corner by the pre-existing localization of the game this show is based on, which calls the group the Phantom Thieves. Presumably, any references to “The Phantoms” were changed to that, but there’s no way for the subtitle writer for this show to cover it up. 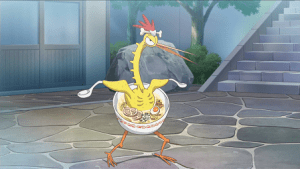 Cute High Earth Defense Club HAPPY KISS! #5 – For a guy who wants to bring order and discipline to society, Ata isn’t doing very well even controlling his own teammates. This week, Māsa strikes out on his own with his Fatten Up the Pigs Festival, determined to plump up the entire student body. Which actually doesn’t work, particularly not for the skinniest kid in the whole school, so in due course the Karls Knights have to face off against an anthropomorphic chicken and his brutally tasty and nutritious attacks.

Along the way, Māsa turns out to have some body image issues as well. Somewhere in between that, the ruminations about genetics, and Kyōtarō’s little lecture at the end, this episode winds up in the vicinity of a point about accepting one’s body as it is. I don’t think it quite stuck the landing, but on the other hand, I don’t think I’ve ever seen a show full of male characters try tackling the subject at all before, so kudos for trying.

But kids, if you do wind up throwing up practically everything you eat? Please talk to a medical professional about that.