BIG News this week. Both IMPORTANT stuff and LOTS of it! Deadpool, Air Trains, Shellfish addicted to opioids, GRRM, the Wasp and Ant Man, FanX troubles, robobabies and much, much more.

Alan Bean Art “You can create the very first paintings in all of history of a place other than our own planet,” they said. “Your paintings will forever be the first paintings of the many other worlds humans will visit as the centuries unfold.”

Because of this unprecedented opportunity and challenge, I resigned from NASA in 1981 to devote all of my time and energy to painting, celebrating the great exploration that was Apollo.”

Jack Clemon’s Coverage of the famous “SCE to AUX” Incident 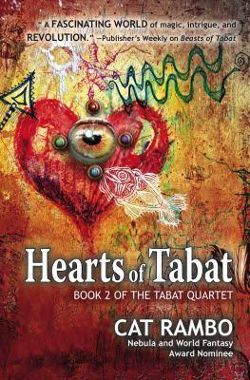 Cat Rambo announces her new novel Hearts of Tabat and has this to say:

If you’re familiar with my previous novel, Beasts of Tabat, this is the same world, but familiarity with the first novel is not necessary to this book, which also serves as an introduction to the series. (Though if you’d like it, here’s a Storybundle with it!)

AND EVEN MORE SPECIAL:

Happy 83th Birthday to Harlan Ellison!  (Don’t forget, Segaloff’s bio, A Lit Fuse, is up for a Hugo this year!)

“SWATing” is Not a Game:  Swatters Indicted

Speaking Spanish Can Get You Detained

Female Economist is Upending Our Notions of Money

Detailed Analysis of the Mueller Investigation

Charlie Stross Paints a Disturbing Picture of the Future

Amazon, Now Selling Facial Recognition Software to Police (how many more reasons do we need…?)

Fred is FREE!  Fred the Octopus Gets Help From Fish Seller (It’s a good idea not to eat ‘alien’ intelligent species.  They might have friends.  With Starships. Squids, maybe. They’ll be looking for someone named ‘Margaret’.)

The Heinleins and the Clarkes.  After dinner, bridge, I suspect

In the film’s parlance:  Deadpool 2 Sits on Infinity War’s Face

Five of the Interet’s Dumbest Debates

Watch the MCU in Chronological Order

Troll Bridge Trailer (there used to be one under every bridge.  Guess those billygoats were too effective!)

GRRM is Becoming an Entertainment Powerhouse

A Roundup of SF Podcasts

A Look at the History of Chinese SF in Translation

Praise Deadpool2 for LGBTQI Inclusion?  Not so fast…

EmDrive:  More Testing Suggest BS (no matter how much we may want it to work)

Mussels Off Seattle Found to Have High Levels of Opioids

Hey folks, I’m back after a self-imposed 6 week (or so) hiatus from writing posts for ASM.  I went off to work on an art installation, so now that’s done I can get back to writing about what’s truly important: comics. During the time I was working on the installation – I took a quick […]

News of a writing contest and the release of the latest issue of Digital miNatura.