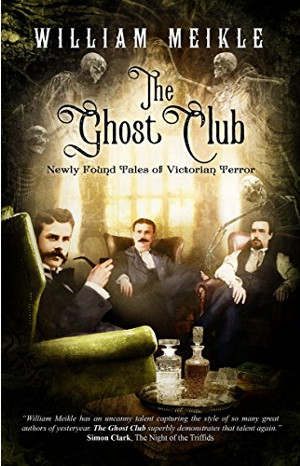 What if there was a private book club that took place during the Victorian era? What if that book club was attended by an exclusive group of legendary individuals whose members helped carve the foundation for literary greatness? The Ghost Club: Newly Found Tales of Victorian Terror by William Meikle from Crystal Lake Publishing is that book club. Though the likelihood that such a collection of talent could be assembled in a single setting is a bit quixotic, the idea is one that begs examination.

Part of the cleverness behind attempting to capture the literary style of so many noted authors is Meikle’s use of Arthur Conan Doyle as the scribe. Doyle is said to have transcribed all of these tales on a typewriter from the verbal narrations presented by the other participants. Sitting around a table hearing ghost stories from the creative minds of famous writers, some who are not noted for their horror prowess, is certainly a party I would like to be invited to. And though Meikle does a fitting job adapting the individual voices to each spooky tale, the reader’s understanding that these are being interpreted by Doyle helps provide some forgiveness from the loyal fan if the narration strays from their favorite author’s normal voice.

For the record of plausibility, the Victorian Era spanned over 60 years while the envelope for which the writers in this collection overlapped in real life existence was barely 25 years. So, regardless of the global separation between these writers, there is a chronological possibility that these characters could have met. That, and the fact that all of these stories have the romantic industrialization feel synonymous with the Victorian era, it’s easier to accept the premise and get drawn into the tale.

As for noted authors, see if you can spot a favorite or two…or more.

The High Bungalow by Rudyard Kipling

The Immortal Memory by Leo Tolstoy

In the House of the Dead by Bram Stoker

Once a Jackass by Mark Twain

To the Manor Born by Margaret Oliphant

The Angry Ghost by Oscar Wilde

The Scrimshaw Set by Henry James

At the Molenzki Junction by Anton Checkov

To the Moon and Beyond by Jules Verne

The Curious Affair on the Embankment by Arthur Conan Doyle

Granted, there is a plethora of varying writing styles stemming from the notable works familiar to these popular authors, and the prospect of such a cohesive collaboration between all of them is doubtful. But, it is one of those outrageous scenarios that many members of fandom would love to have happen. From spirited dolls, haunted houses and even an eerie mystery at Scotland Yard, readers will find plenty of new adventures as told by some familiar voices.

For a brief moment, or at least until the last page is turned, William Meikle reminds us what was special about some of our favorite authors in his book The Ghost Club: Newly Found Tales of Victorian Terror.