Home Review Review: All the Wonder that Would Be by Stephen Webb

There’s a bit of Nostradamus in all of us. And those who delve into the throws of Science Fiction either love it or hate it, because eventually, our predictions are either spot on or way off base. We are either geniuses for our prowess or fools for our naivety. Face it, we cannot foretell the future without truly going there first, so the accuracies and inaccuracies of our future as represented in modern literature is blind luck. 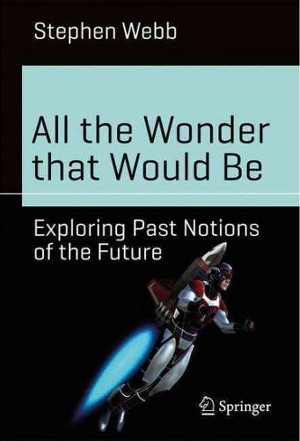 All the Wonder that Would Be: Exploring Past Notions of the Future by Stephen Webb is a fabulous book from Springer Publishing that takes readers into the heart of predictions and expectations as they are or have been portrayed in Science Fiction. An admitted fan of Isaac Asimov who has provided a number of reviews on his website, and the noteworthy fact that he earned his BS in physics from the University of Bristol and a PhD in theoretical physics from the University of Manchester and has a number of science book publications under his belt, Webb has a natural ability to explain and entertain both professionals and the novice.

Examining the most prominent ideas of future prospects in popular literature, the book dedicates ten individual chapters dedicated to each of these areas. Included are, Antigravity, Space Travel, Aliens, Time Travel, The Nature of Reality, Invisibility, Robotics, Transportation, Immortality, and even the horrific speculation of the Mad Scientist.

The author’s passion and enthusiasm come through as he expresses the joy in modern discoveries that have upheld some of the speculations we’ve read about in science fiction. Sure, things like time travel or alien races seems improbable with the knowledge that we have today, but there is still enough plausibility in the ideas and there is so much about the subjects that we don’t know, the possibilities stimulated by our imaginations are endless.

The casual reader will find All the Wonder that Would Be difficult to put down as many of the questions we pose while reading science fiction or watching on the big screen are put to rest. Writers of the genre would benefit from this book too, because the backbone of plausibility is knowledge. Readers are loyal to credible ideas, but if that trust is broken, the next page is rarely turned. Predicting the future may not be an exact science, but defending past notions that have come to fruition really is.