Home Anime/Comics Anime roundup 4/19/2018: The End of the Beginning 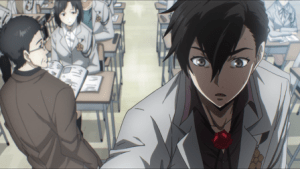 Caligula premiere – Ritsu Shikishima is a seemingly ordinary high school student leading a seemingly ordinary and happy life, except for his enthusiasm for social psychology which no one shares. But over time, he starts noticing odd things about the world around him, and suddenly he’s dropped into a predicament he won’t be able to just pop-science his way out of.

For anyone who comes in knowing the premise of the show, and thus the nature of Ritsu’s world, most of this episode will be spent waiting for him to catch up. But there’s a surprise at the end even for you, as the problem he’s facing abruptly ramps up from mild weirdness to a very large and immediate threat.

Ritsu himself could easily have been yet another insufferable genius hero mansplaining his way out of everything, but instead he’s set up as the guy who annoys even his friends, and it’s the school delinquent who is best handling the situation at the moment. Production values are decent, and any story trying to break out of the trope that high school is the awesomest time ever is worth checking out. This is worth at least a second episode. 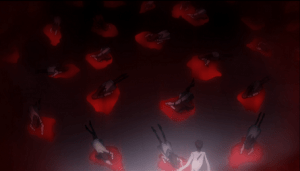 Steins;Gate 0 premiere – Rintarō Okabe was once a time traveler, but he gave up trying to fix the world after watching his friends die far, far too many times. Now he’s just trying to be an ordinary college student with ordinary interests who totally is not on the verge of losing it several times a day from his waking nightmares. This is not going well, partly because reminders of old times keep popping up, culminating in the digital resurrection of a friend he couldn’t save. Meanwhile, World War III still looms in the future…

If you’re a fan of the original Steins;Gate, this is a bittersweet reunion. The Okabe here is one who has been through all the growth and change of the first story, but is trapped in the worst moment of it. All the old gang is back (plus Suzuha’s mom!), but with a more serious tone and fewer otaku hijinks (which, if we’re being honest, kinda dragged things down during the first half of the original, so that may be a plus).

If you’re not familiar with the original, that’s fine, because all the bouncing around between different timelines means that most of the characters aren’t familiar with the backstory either. Just about all you need to know has been explained by the end of the episode.

At first glance, this looks like a worthy successor to one of the best shows of the past decade, so this is definitely getting a second look. 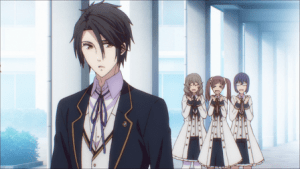 Butlers x Battlers premiere – Kōma “J” Jingūji is the hottest dude in school and super smart and the student council president, just in case you were worried this show might have a flawed hero. J has more important things on his mind, like tracking down another young man by the name of Tsubasa Hayakawa, over an old grievance that is only explained as an afterthought tacked on after the end credits. Because what this episode is really about is introducing a whole pile of characters, complete with name, rank, and nickname displayed on screen to save dialogue, as everyone goes about their mundane lives.

This show is so lazy, it doesn’t even bother establishing an identifiable quirk for each of its characters. (Although the pre-show publicity did include the fact that each character has a signature color.) The approach is just to cram a whole lot of bishōnen onto the screen and hope that’s enough.

As for the promised time-travel adventures and present-day comedy, we don’t get either in this premiere. Just a bunch of dudes doing boring things. Sorry. 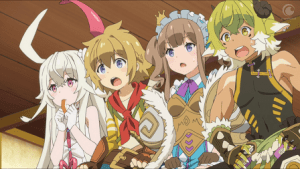 Last Period: the journey to the end of the despair premiere – Randomly spawning monsters called Spirals infest the world, so the monster-fighters known as Periods have to track them down and slay them. One particularly generic group of Periods— The Hero, The Girl, The Weird Foreign Guy, The One That Looks Like a Girl But Is Apparently Not An Actual Person, and The Cute Mascot— returns home from a camping trip to learn that their branch office has been closed and sold off, and they’ll have to rebuild it from the ground up.

Last Period is based on a freemium smartphone game, and goes to no effort to disguise the fact. The game mechanics are all on full view, to the point where one featured is specifically described as being only activatable by spending yen, which none of the characters have ever heard of.

It’s not clear who the intended audience is, or if there is a specific audience in mind beyond people who haven’t played the game yet. The young characters, colorful costumes, and relatively unthreatening monsters suggest it’s aimed at kids, but there are also a ton of jokes about employment and economics clearly intended for adults.

There’s nothing really wrong about this show, and the translator’s having fun, so go ahead and check it out if you want to. But it feels like the very definition of disposable. 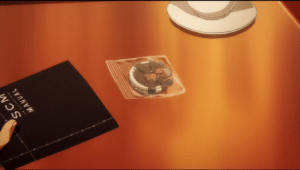 Doreiku the Animation premiere – Someone has invented a device called the SCM, which works like this: Put it in your mouth, then challenge anyone else wearing one to a duel or competition of some sort, and whoever loses (or, crucially, thinks they’ve lost) becomes the other’s slave. There are a few limitations, such as not being able to order your slave to commit suicide, but all sorts of humiliation and torture are fine.

This opens up a whole bunch of unpleasant places for the story to go, and the premiere promptly explores several of them. The very first use of the device shown is to commit a rape; shortly afterward, it’s being used as revenge for another one.

There are a couple of interesting people being positioned as main characters. One is a man who wants to test himself, shōnen hero style, and needs backup to rescue him in case he loses a challenge. The partner he lines up is a woman who may be immune to the process the SCM uses. But mainly, it looks like this is going to be about a whole lot of repetitive human degredation. HIDIVE, why did you pick this for your first simulcast dub? 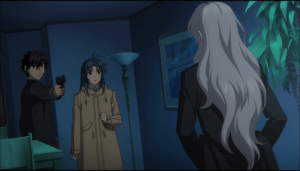 Full Metal Panic! Invisible Victory premiere – Kaname Chidori is a teenage girl with a very special but vague power, which for the moment just involves doing really well on math and science tests. Sōsuke Sagara is her bodyguard, almost-boyfriend, and link to a  paramilitary(?) organization called Mithril which operates mecha and other hardware. Mithril’s opposition is Amalgam, which is about to launch a crippling strike on Mithril’s assets around the world, and also wants to seize Kaname.

This is another sequel to a beloved franchise, but one more interested in playing mostly to existing fans. Nothing is explained about Mithril and Amalgam, particularly not why the only Amalgam agent we see is capable of popping up any time in Mithril’s territory but mysteriously does not kidnap Kaname when he seems easily able to do so.

Other potentially off-putting features include the terribly generic art which makes almost every major character look like pretty much the same person with different hair, and teenage characters making ponderous speeches which sound most un-teenage. Whether or not this is still worth the devotion of hardcore fans of the series, this is a terrible place for a new person to start. 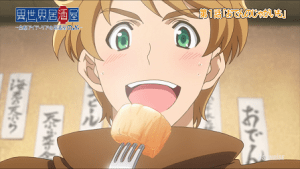 The setting of this show is an izakaya (Japanese pub, basically) run by people from our world, but with a door opening on to a Western RPG-style medieval fantasy land. This may sound familiar after last year’s Restaurant to Another World, but Isekai Izakaya sadly lacks the previous show’s clever use of fantasy storytelling tropes. On the other hand, this one throws in a live cooking segment after the anime, so maybe check that out for some practical tips. 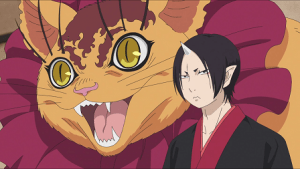 Hozuki’s Coolheadedness 2 #14 – Hey, we’ve still got a couple of continuing shows to re-evaluate! As the second half of this one kicks off, Hell is hiring new employees to keep up with the ever-increasing number of sinners. Alongside Hōzuki, the interview panel includes Mustard the psychotic rabbit, the Stripping Hag, and a giant demon cat, because why not. In the back half, Shiro the lovable idiot dog talks Hōzuki into visiting a restaurant with a poorly thought out eating challenge.

As usual, along the way, the demons of Hell in their workaday world provide a springboard to ruminate on various topics, such as the constancy of fraud (apparently family member impersonation scams happen everywhere), and the decadence of the modern world where even kappas have smartphones now.

Although this is one of its slighter episodes, Hozuki’s Coolheadedness is still humming along on all cylinders, and I’ll give it a chance to fight for a spot in this season’s lineup next week. 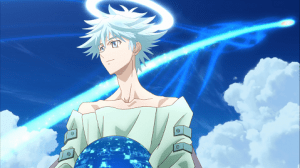 Hakyu Hoshin Engi #12 – And in our holdover from winter season: At Kingo Island, the fight has been going on for two days and most of the Juttenkun are still alive. Finding another hyperspace pocket, it’s Fugen’s turn to shine. Defeating a monster with the power of chemistry, he completes this show’s mutation all the way from high fantasy to science fiction.

You know, I saved this for last because I was pretty sure I’d be dropping it at this point, but where’s the case for that? The visual work is still great, the narrative jitters have settled down again, and this is an ever more fascinatingly unique take on a work of classic literature. This show may have gotten off to a very shaky start, but it’s holding up very well now, so it gets one more chance to seal the deal last week.

And that is finally, finally the end of the longest premiere “week” yet. In case you missed a show that was in the preview, Jūshinki Pandora, Lost Song, and Hisone to Maso-tan have all been eaten by Netflix, which not planning to simulcast them, and neither Ladyspo nor Layton Mystery Tanteisha has any international distribution.

That leaves us with Megalo Box, Steins;Gate 0, Persona5, Caligula, Cute High, Legend of the Galactic Heroes, Hozuki’s Coolheadedness, and Hakyu Hoshin Engi fighting for a maximum of five places in our lineup for the rest of the season. See you next week for the final decision! (Or, argue for your favorite in the comments…)