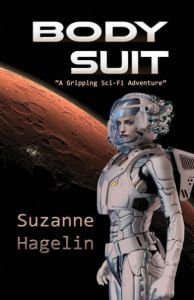 I love coming across science fiction authors that challenge the norm. Isn’t that what forward thinkers and creatives should be doing? Questioning what is readily accepted and posing a new ‘what if it weren’t so’?

So when I met author Suzanne Hagelin, author of a science fiction adventure story titled Body Suit I had plenty of questions for her. Her book is an exciting and unusual take on the interstellar space travel of a woman destined to servitude in a hostile environment because of debt and abuse.  Intrigued by the story, and especially by Suzanne’s life experiences which include teaching, traveling and technology, I wanted to know how she came up with such unique ideas. As she tried to explain where her concepts came from during a busy book signing convention, I thought I’d have her jot me some notes to pass on to you.

Exactly how WOULD computers behave if they became sentinent?

I see in a lot of (restricted thinking) in sci-fi when it comes to imagining how computers would behave if they became sentient. For one thing, why is it so often assumed that the clean logic of a thinking AI would make it hostile to humans?

It’s a fallacy to assume that thought, stripped of emotion or emotional bonds, would lead to heartless and senseless cruelty. I’m not an expert in philosophy but it just seems like in the flow of twentieth to twenty-first century thought, in a world where terrorism has become something we live with, we have subconsciously accepted a ‘logic’ that says human life has little to no value. Therefore, a logical machine, once it can think for itself, will turn against us.

The question is, how does a machine make decisions? How does it make choices? How would it ever, EVER, become an individual thinker and therefore a sentient being?

Artificial Intelligence is called artificial precisely because it simulates intelligence.

It doesn’t possess it the way we do. But because we exist, and we think and make choices that can’t be explained by code and logic, as human beings we wrestle with the question of why and how we can do that. And why couldn’t we design a system that could also do that?

In most sci-fi, ‘Singularity’ is approached as a mysterious event. A massive, worldwide AI, with huge resources of memory and processing power, somehow hits a turning point and in a crashing explosion of accelerated development, becomes a thinking, sentient being—who then turns and systematically enslaves and/or destroys people.

This makes for all kinds of exciting stories, but it’s not the only scenario that could be posed.

Within the computer’s processor, decision-making is a clean mathematical mechanism. Every ‘decision’ made is a computational process. In other words, if a choice is to be made, the code indicates how it is done. The code indicates the value judgments that need to be made.

For example, comparing data to be sorted alphabetically. The alphabetic order chosen for the process is basically the value system being applied. This is the core of the computer’s choices as it places each piece of information in order.

If it becomes possible to create code that is gifted and versatile enough to develop thinking processes that approach free will, and therefore independent decisions and choices, it will be built on values. Computers make value decisions all the time.

The question becomes, what are the values they would use for higher level thinking—and where do they obtain those values?

Suzanne Hagelin, after early childhood in the United States, grew up in Mexico City where she received her education in Informática (Computer Science and Business). She worked as a computer programmer/analyst in both Mexico and later in Seattle which has been her home for most of her adult life. She lived for several years in Israel while her husband worked on contract, and pursued intensive language studies in Hebrew, and also started a family. She transitioned into education through homeschooling which opened doors to teaching languages, world history and literature, and other subjects. More recently, she has pursued publishing and writing. Her first science fiction novel is “Body Suit”.