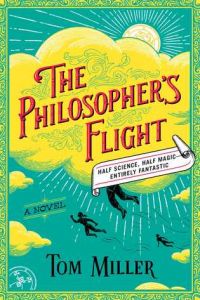 “What if magic exists” is a common question asked in alternate history. Often times creators just take what would have been historical fiction and give it a fantasy paint job without going into too many details about how life would be different for the average person if the supernatural was real. That said, some authors will go the extra mile and really get into the nitty-gritty of the social changes caused when the impossible becomes reality. One such book is the debut novel by Tom Miller: The Philosopher’s Flight.

The Philosopher’s Flight‘s protagonist is Robert Weekes. He assists his mother who is a county philosopher in Montana. He dreams of joining the US Sigilry Corps’ Rescue and Evacuation Service, an elite group of fliers and while Robert is a fair flier (for a man), the chance of him joining the all-women unit are slim to none. That is until Robert pulls off a difficult night rescue and is offered the chance to study empirical philosophy at Radcliffe College, an all-women’s school in Boston. There Robert grows as a philosopher and meets many new friends. Meanwhile, America’s involvement in World War I escalates and anti-philosopher sentiment grows across the country.

Now from a political history stand point The Philosopher’s Flight is more of historical fantasy than an alternate history. Famous people, events and wars all happen at the same time with similar results. The big difference is all of the societal changes. As the American economy becomes more dependent on empirical philosophy, things improve for women in the country. For example, women get the right to vote in the 1860s, philosophically produced contraception/abortion are legal and commonplace and while gay marriage doesn’t appear to be legal, gay relationships (at least among women) are tolerated. Additionally, its implied civil rights are better in this alternate 1910s than they are in our timeline, but there is no strong focus on them.

There is also a backlash against this early feminism (led primarily by a veteran of the so-called Confederacy) that mirrors what we are seeing today with movements like Gamergate and other “male rights activists” (I always chuckle anytime I need to say or write that). This backlash, however, is a lot more violent as both sides are not adverse to vigilante killings. In truth it is fascinating to see how Miller has this drama plays out as American society has to deal with women’s liberation generations before it happened in our timeline. Plus its heavily implied through the prologue and snippets at the beginning of different chapters that things don’t turn out well in the end.

Enough about the worldbuilding, lets talk about The Philosopher’s Flight as a whole. I enjoyed the novel immensely and had trouble putting it down at the end. It did remind me a lot of Harry Potter considering you got the protagonist training at magic school, but the kids are older and Miller gives a more realistic take on that kind of story, so perhaps it has more in common with Lev Grossman’s The Magicians. Nevertheless, with the focus on women using supernatural abilities to gain more freedom in society, I couldn’t help but think of Naomi Alderman’s The Power as well.

Miller, however, does something a little different than what we saw in The Power. For example, Robert plays the part that would usually be played by a girl in other historical fantasies (especially steampunk stories). Thus in The Philosopher’s Flight we have a man trying to break into a profession dominated by women and he experiences a lot of prejudice throughout the story. Even when he gets a chance to prove himself and show that he just as good, if not better, than most women philosophers, female authority figures still can’t see him as anything but a man playing at things he can’t possible understand.

Personally I think this is an excellent way of teaching other men what it would be like to be harassed and looked down upon simply because of your gender. For some out there the only way they can ever truly empathize with others is when they are forced to imagine the discrimination being directed at them. Unfortunately that could always backfire with some people taking the wrong message from the novel (SEE! SEE! THIS IS WHAT THOSE DAMN FEMINAZIS WANT!!!), but screw those people.

The Philosopher’s Flight is an engaging historical fantasy set in a world where women are liberated thanks to magic that doesn’t forget to consider the social and political consequences of such a development. Since its only book one of The Philosopher’s War series, I personally will be waiting impatiently for book two to come out.