Home Fantasy Evil is a Matter of Perspective: An Anthology of Antagonists, ed. Adrian... 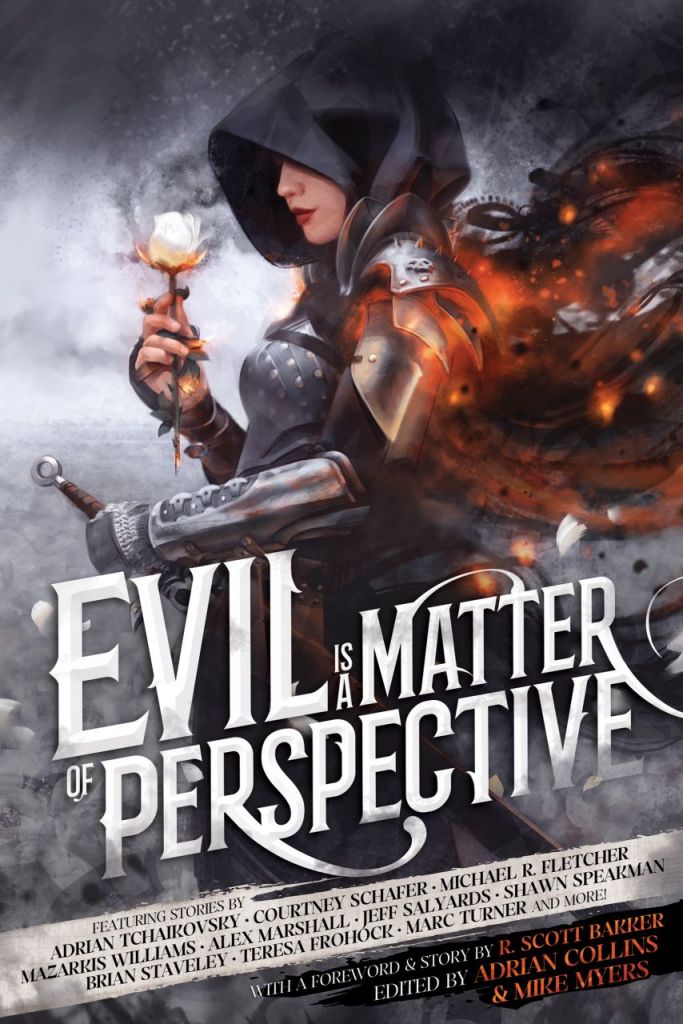 Not being a massive reader of fantasy, though I do enjoy the genre, I was delighted to be introduced in this anthology to the work of writers with whom I am largely unfamiliar. To aficionados, many of these are household names, while others are less well-known.

What I can tell you is that within these pages we are treated to nineteen imaginative, extremely dark tales with morally-complex characters and gritty storylines. However, not all of the contents are as black as the title suggests, though many certainly are. Let’s call it instead, “19 Shades of Grey”.

Planting its flag firmly in “grimdark” territory – a branch of fantasy that is not in itself new, since fantasy of any worth contains multi-dimensional characters, though the tag broadcasts what readers can expect – Evil is a Matter of Perspective (Published by Grimdark Magazine) is the perfect introduction to worlds and characters that personify what we might call transgressive fantasy in which no one is completely evil or completely good.

Scott Bakker’s brilliant opening essay, On the Goodness of Evil, explores the origins of what religions across the world have dubbed “evil”, and where the notion sits now in modern society and in the fiction which contains discourses on the topic.

In his conclusion, Bakker says, “By committing to the perspectival nature of evil, grimdark writers themselves risk what others call evil. Grimdark, you could say, contains a commitment to the potential goodness of evil, the need to ignore the moralist and to make readers itch.” Bravo, say I.

As to the stories themselves, I won’t attempt to review all of them, but I will highlight some. Most of them are exceptionally good, riveting, horrific, gory, and sometimes even a little shocking. A few feel slighter, though still solid by most standards.

The Broken Dead (Manifest Delusions) by Michael R. Fletcher features his Cotardist assassin, Anomie (reanimated in this story), who is given a mission to rescue the god-child Morgen from his abductors. But the poet, Matthäus, her companion on her journey, needs her to die in order to finish a poem he is working on. I haven’t read any of Fletcher’s novels, but on the strength of this terrific story, I wouldn’t hesitate to pick one up.

Every Hair Casts a Shadow (Los Neffilim) by Teresa Frohock is set during the Spanish civil war and contains another war, between angels and demons. A fascinating premise, well told.

Old Blood (Shadows of Apt) by Adrian Tchaikovsky is a solid story, though it assumes the reader has knowledge of the Shadows of Apt series. There is also a fair bit of material about different species and cultures that would have been enhanced with some knowledge of the world of the novels. Nevertheless, I am keen on Adrian’s work generally, and this one was no exception – I still love the guy’s work.

In The Greater of Two Evils (The Chronicle of the Exile) by Marc Turner, we are given water mages and pirates on the high seas. Well-paced, with a riveting storyline and solid characterisations.

When I learned that Kaaron Warren had a story here I couldn’t wait to read it. Her novel, Slights is one of the weirdest, most disturbing things I’ve ever read. Although the tale here, Exceeding Bitter, still manages to be deeply strange, and skin-crawly, I feel Warren is better at longer lengths.

The longest tale in the anthology is The Tattered Prince and the Demon Unveiled (The Song of the Shattered Sands) by Bradley P. Beaulieu. It has the flavour of the Arabian Nights, featuring a djinn-like creature trapped in a jewel who tries to manipulate his master, sometimes successfully. I enjoyed this one enormously.

I know that Peter Orullian is a popular, well-respected writer, so I expected great things of The Aging of a Kill (The Vault of Heaven). And while I was not disappointed – this is a brilliant story in most respects – I was genuinely surprised by some awkward writing in the early pages, with sentences that are over-written and could have done with being edited down. Then there are some that make no sense whatsoever: “The insult burned behind my teeth”; and “I nodded imperceptibly.” How can someone nod imperceptibly? I almost gave up reading, but I was glad that I persisted because the tale soon got its hooks into me continued so beautifully that I was ultimately swept away by it.

The editors have done a sterling job in pulling this anthology together. It is clearly a showcase for the authors’ novels and I assume meant to inspire you to read them. In that respect it succeeds – I would wish to seek out more of some of these writers on the strength of what I read here. On the downside, some of the stories do feel like fragments of longer works rather than self-contained, perfect short pieces in their own right. There is a lot of seeking revenge, extreme violence, and adventure for its own sake, and less in the way of character arcs in which the endings are essential, reflective on what has gone before or tell you anything particularly new. But then again, these things may be unimportant in terms of what these tales are doing. They are rooted in the traditions of pulp fiction, after all, albeit with a postmodern sensibility.

The anthology cements the idea that evil certainly is a matter of perspective. But, then again, so is goodness (perhaps a follow-up volume there?)