Home Science Fiction Book Review: Once There Was a Way: What if The Beatles Stayed... 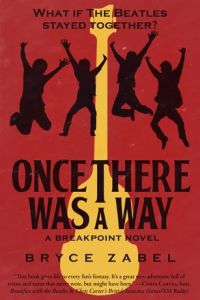 Most alternate history is based on the great drama of history, i.e. politics and war. There is, of course, nothing wrong with this. Politics and war can be exciting to learn about, especially for an old school historian like me. That said, I can understand why some might find this boring after a while. Occasionally they will want to read about something other than battles or elections going differently. For those people I can recommend Once There Was a Way: What if The Beatles Stayed Together? by Bryce Zabel.

Written in the style of a fake history book, Once There Was a Way tells the story of how the Beatles kept going after John Lennon and Paul McCartney got the actual Johnny Carson to host The Tonight Show in 1968, rather than a guest host, while promoting their new company, Apple. After getting some good advice about show biz from Ed McMahon, the Beatles manage to power through their egos and stay together as a group well into the 1970s. The book recounts how the music of the Fab Four and the world itself is impacted by the Beatles continuing to chug along. Along with albums that never existed we experience a Lord of the Rings adaptation directed by Stanley Kubrick, Ted Kennedy getting the Democratic nomination for President in 1972 and a different career path for Steve Jobs.

I admit that while I know who the Beatles are and enjoy their music, I wouldn’t consider myself a fan with in depth knowledge of their history. Thus I can’t say with any certainty how well Bryce captured the personality of the individual Beatles and their affiliates. That would be something only true fans could probably comment on and that could be considered a drawback of Once There Was a Way. It begins pretty much near the end of the Beatles in our timeline and so it assumes the reader knows everything that came before. If you are a true Beatles fan, great! You won’t have any problems…but casual fans may need to keep Wikipedia handy.

While some might think the above hurts the book, for an alternate historian like myself, it is actually a selling point. Once There Was a Way does what any good alternate history does: it made me want to learn more. Thus I got an education on a legendary rock band and their individual members with an engaging story to boot. For example, I had no idea Ringo Starr’s actual name was Richard Starkey. I knew stage names were a thing, but as far as I know, no one has ever called Ringo by his birth name to me in my life. On top of that I found Ringo to be the most “normal” of the Beatles (or as normal as any legendary musician can be) and found a new appreciation for the rock star.

Once There Was a Way‘s greatest strength, however, is what I already mentioned in the introduction: its divergence and subject is not based on war and politics. O sure, both appear in the book as the Vietnam War winds down and Nixon White House implodes, but they are set dressings. The real stars of the show are the Beatles and how they overcame their egos to play on as a unified band. For someone who has read a lot of alternate history (published, self-published, unpublished and web originals) it is a refreshing change of pace.

If you want to see how a rock band can change history then Once There Was a Way: What if The Beatles Stayed Together? by Bryce Zabel is a book worth checking out.